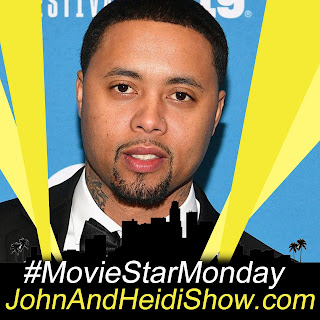 It's a #MovieStarMonday with Jamal Trulove framed for murder, spent six years in prison, was then exhonorated and won a $13.1million settlement. He's now an actor and has a new movie out NOW! He co-stars in the critically lauded feature, Joe Talbot's "The Last Black Man in San Francisco" opposite Jimmie Fails, Jonathan Majors, Danny Glover, Rob Morgan, Tichina Arnold and an ensemble of talented performers. https://www.youtube.com/watch?v=C0FnJDhY9-0

A new survey found that Fortnite has surpassed Facebook and Instagram as the most popular social platform for teenagers. (https://bit.ly/2Wx4qjf)

Authorities say that a Florida man’s order was up after deputies discovered a bag of meth inside a Styrofoam container of “hot, fresh potato wedges.” 48-year-old James Simpson was arrested Saturday afternoon after police conducted a traffic stop. Police said Simpson was wanted on an active drug warrant for alleged possession of drug paraphernalia in Polk County. A deputy searching the vehicle found six grams of methamphetamines inside a container mixed in with potato wedges. Simpson was arrested and faces an additional charge of possession of a controlled substance. (https://fxn.ws/2WBrXQc)

Critics are saying the new “Frozen” trailer is exceptionally dark and scary.
(https://nyp.st/2F3Z5Kc)

Steven Spielberg is said to be writing a horror show that you can only watch at night. (https://bit.ly/2Iyj2Kk)

SCOOP OF THE DAY: Brought to you by BetterCreditCards.net
The New York City headquarters of the “Hells Angels” motorcycle gang is being turned into rental apartments. (https://nyp.st/2WFQGYw)

A New Jersey Dunkin’ Donuts may have exposed customers to hepatitis.
(https://bit.ly/2K7BwEB)

The California Highway Patrol is reporting that car-to-car-shootings are on the rise in the state. (https://bit.ly/2ZfpU5R)

A shocking new report claims that Kim Jong-un executed a top general by throwing him in a fish tank filled with piranhas. (https://bit.ly/2MAGnQB)

The Church of England announced that it supports the legalization of medical marijuana. (https://bit.ly/2WtOC0q)

More than one million people took to the streets of Honk Kong Monday to protest a new law that makes criminals eligible for extradition to mainland China. (https://tmsnrt.rs/2I7rOQl)

A leading artificial intelligence expert is warning that new killer robots can change their appearance to conceal the crimes that they commit.
(https://bit.ly/2X0HJrZ)

A Vietnamese model was disciplined by the government for wearing a skimpy dress to the Cannes Film Festival. (https://pge.sx/2RbXKWR)


FUN FACT FOR YOU:
Share this with your friends... they'll think you're really smart!
NASA thinks it’s detected the first “marsquake.” Earthquakes are expected in many places on Earth, but it turns out they can happen on other planets as well—although they’re obviously not called “earthquakes.” On April 6, 2019, NASA’s Jet Propulsion Laboratory recorded a tremor that they believe was a “marsquake,” making it the first quake recorded outside of either the Earth or the Moon.


WEIRD NEWS: Brought to you by WeirdGiftOfTheDay.com
A naked Florida man couldn’t be bothered to mind his pees and Qs. “There’s a man out here butt naked!” exclaimed a woman speaking to a 9-1-1 operator after witnessing a man wearing nothing but his birthday suit attempt to enter a convenience store several days ago. When the 9-1-1 technician asked if the man was sporting any weapons, the caller stated, “No, he is like nude. Nude. He’s very nude!” Employees at the Daytona Beach Circle K locked the store so he couldn’t enter. That’s when he allegedly began urinating on the doors. Cops in the area quickly responded, but that’s when the nude, lewd dude reportedly turned his attention on the officers by allegedly trying to “sling urine” on them. Two cops attempted to subdue the suspect by commanding him to stop. When the man allegedly made rude gestures, a third officer tackled him from behind. The suspect also was allegedly sprayed with mace. Police filed several charges against the man they’re calling John Doe after he was taken to a hospital for evaluation. (https://bit.ly/2R3fDXB)

If you are feeling blue and need someone to talk to, do not call the 9-1-1 operator to chat. Police allege that 55-year-old Jeffrey Gorton dialed the emergency dispatch number seventeen times between Wednesday and Thursday last week. The Florida Man explained that he called 9-1-1 because “he was lonely and needed someone to talk to.” Cops say Gorton was warned that if he persisted contacting emergency services “without the need for such services he would be subject to arrest.” Gorton was eventually busted for misuse of the 9-1-1 system, a misdemeanor. He was arrested at his home in Holiday, a Tampa suburb. Gorton was on the phone with a 9-1-1 operator when police arrived at his residence. (https://bit.ly/31fy6ox)
THESE THREE THINGS!
What do these 3 things have in common:
a gymnast, a decathlete and a bank
(They have VAULTS)