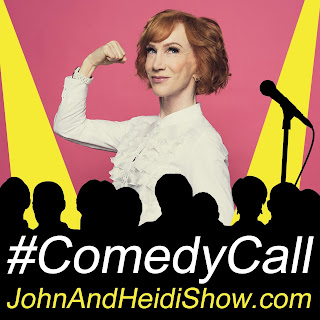 We talk with Kathy Griffin about her first docu-comedy film, KATHY GRIFFIN: A HELL OF A STORY. On July 31st this will be in U.S. movie theaters as a special one-night cinematic event. More informationis available at www.FathomEvents.com.

Kathy is a #1 New York Times best-selling author and is in the Guinness Book of World Records for writing and starring in an unprecedented 20 televised stand-up specials. Griffin made history by being nominated for six Grammys and won for Best Comedy Album.

A survey by the Atlantic found that Americans are not happier in bigger homes, despite the extra space. (https://bit.ly/2Iahnve)

A Nashville bachelorette party guest allegedly “went psycho” and trashed an Airbnb in a booze-fueled rampage — earning her a trip to the hospital and jail. Alexandra Cheety, who is from Garwood, N.J., told police that she drank two bottles of wine before she caused an estimated $1,900 in damage Thursday to the group’s rental home. Police said they were called to the residence around 3:00 p.m. and found the 29-year-old outside with a bleeding right foot. Inside the home, a number of items reportedly were destroyed, including two sets of blinds, a lamp, and chair. The front windows were also broken and a coffee table was flipped upside down. Cheety told officers that she had been drinking and “went psycho” but couldn’t explain how the damage occurred. The bride squad member was brought to a hospital for treatment for the wounds to her feet, which investigators believe were caused by Cheety kicking through the window. She was then booked on a felony charge for vandalism at Davidson County Jail, where her bond was set at $2,500. Her next court date is set for July 12th. (https://nyp.st/2ZosUx4)

SCOOP OF THE DAY: Brought to you by BetterCreditCards.net
Taco Bell announced that its bringing back Nacho Fries. They were removed from the menu back in April. The cheesy chow sells for $1.29 but they also have a super sized version called “Supreme Nacho Fries.”
(https://bit.ly/2ME4Ep3)


A Nebraska man was arrested after he used a drone to deliver marijuana to a prison. (https://bit.ly/31dENaJ)

Authorities are still investigating a helicopter crash that killed a pilot after it landed on a New York City Skyscraper. (https://bit.ly/31mHBSX)

Authorities in North Carolina have discovered a zombie snake that pretends to be dead and are urging the public NOT TO PICK THEM UP.
(https://bit.ly/2I6L2p2)

The U.S. Army announced that Brigadier General Laura Yeager will become the first woman to command an Infantry Division. (https://nyp.st/2WANc9D)

Space X is developing a point to point space travel program that would get people from New York to Shanghai in forty minutes. (https://cnb.cx/2R398nQ)

A new study found that changing your body’s inner clock from a “night owl” to an “early bird” can be done in less than three weeks. (https://bit.ly/2Kav4wC)

A new study claims that magic mushrooms could be the key to fighting depression. The government hasn’t formally okayed it yet.
(https://ind.pn/2wHMM1M)


FUN FACT FOR YOU:
Share this with your friends... they'll think you're really smart!
There are a ton of misspellings on the Stanley Cup. Winning the Stanley Cup is the ultimate goal for anyone in the National Hockey League. And if you do win it, you’ll have your name etched onto the trophy itself. Unfortunately, whoever is responsible for that task has committed plenty of errors over the years, including accidentally spelling the Toronto Maple Leafs as “TORONTO MAPLE LEAES” and the Boston Bruins as “BQSTQN BRUINS.” Hall of Fame goaltender Jacques Plante won the Stanley Cup for five consecutive years and his name is spelled differently each time, according to the NHL.


WEIRD NEWS: Brought to you by WeirdGiftOfTheDay.com
Police are asking for the public's help to identify two people accused of stealing crab meat from a Pennsylvania grocery store by hiding it in their pants. Lower Allen Township police on Friday released images from a surveillance video at the Weis Markets. They said one of the men stole two packs of crab meat on June 2nd. The pair left the store together, and the other later returned one pack of crab meat for cash. Police said the pair returned two days later and did the same thing. They were seen leaving the parking lot in a white Ford pickup truck with a white cap. (https://bit.ly/2wMqOuv)

A Burger King employee in Florida was allegedly caught “cleaning” a table in the grossest possible way. A customer filmed the employee appearing to use a dirty mop to clean a tabletop she had just eaten off of at the Fruit Cove location. According to her, the employee had just used the mop to clean the floors before using it on the table tops. A woman named Katie Duran filmed the incident. “It was disgusting, honestly,” Duran told the outlet. “I had just eaten on that table. Did you do this yesterday? Do you do this every night? Did you do this, this morning?” In a statement obtained by News4Jax, a spokesperson for Burger King said, “The action depicted in the video is unacceptable and not in line with our brand standards or operational procedures. We have strict protocols around cleanliness and food safety. The restaurant owner will be re-training his team on all operational protocols.” The Florida Department of Business and Professional Regulation issued a statement on the incident. In it, they specifically state that a floor mop is “not an acceptable cleaning implement” for a table.
(https://fxn.ws/2KcNjBB)
THESE THREE THINGS!
What do these 3 things have in common:
A COFFEE SHOP--A GOLF COURSE--A QUART
(They have CUPS)