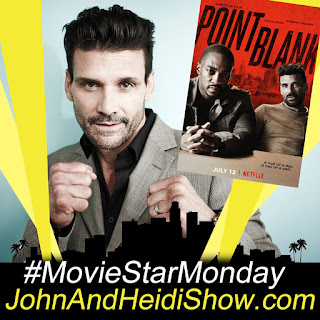 It's a #MovieStarMonday with Frank Grillo, known for his roles in films like Warrior, The Grey, End of Watch, and Zero Dark Thirty. He played the leading role of Sergeant Leo Barnes in the action horror film The Purge: Anarchy, a role he reprised in The Purge: Election Year. He also plays the Marvel supervillain Brock Rumlow / Crossbones in the Marvel Cinematic Universe and Big Daddy in the Chinese action film Wolf Warrior 2, the highest-grossing non-Hollywood film of all time. Also in 2017, he played the main role in the Netflix film Wheelman as a getaway driver in a botched bank heist. He has a new film called Point Blank on Netflix NOW!
(EXPLICIT LANGUAGE IN THE TRAILER)
https://www.youtube.com/watch?v=hIMJ0_S-x40

A study by the University of Southern Australia found that a daily dose of nuts will sharpen your brain as you age. (https://bit.ly/2Jypenf)

According to investigators who have charged the suspect with multiple felonies, a corrections officer used a burrito to smuggle narcotics into a Colorado prison. Acting on information from three inmates who reported that drugs were being brought into the Buena Vista Correctional Facility by a specific employee, officials last week confronted 27-year-old Trevor Martineau who began working for the state Department of Corrections last August. During questioning, Martineau reportedly confessed to having narcotics in his lunch box. Upon opening the box, an investigator “discovered a large burrito inside” with a “plastic baggie sticking out” of one end. According to a probable cause affidavit, the baggie contained several items wrapped in plastic, including 91 grams of methamphetamine, 26 grams of heroin, marijuana wax, and 46 strips of Suboxone, which is used to treat opioid dependence. The bag also contained six thumb drives. (https://bit.ly/2NIwXTN)

LeBron James’ “Space Jam” sequel is getting a new director just two weeks after filming began. LeBron says he has nothing to do with the firing.
(https://nyp.st/2Gf0deJ)

SCOOP OF THE DAY: Brought to you by BetterCreditCards.net
Technology experts are warning against using the popular new FACE-APP that shows what you’ll look like when you’re older because the images are being stored in facial recognition databases that could be used to identify you in the future. (https://bit.ly/2YWhCAj)

Researchers from the University of California created a robot that can solve a Rubik’s Cube in a fraction of a second. (https://bit.ly/2SpK7E2)

A Georgia couple who were married for 71 years has died on the same day.
(https://cbsloc.al/2XXGwOo)

FUN FACT FOR YOU:
Share this with your friends... they'll think you're really smart!
Scientists created a 3D-printed heart using a patient’s own cells. In 2019, researchers from Tel Aviv University successfully 3D-printed a human heart using a patient’s own cells. Biological materials were reportedly used to “completely match the immunological, cellular, biochemical, and anatomical properties of the patient,” the lead researcher said in a statement. “People have managed to 3D-print the structure of a heart in the past, but not with cells or with blood vessels. Our results demonstrate the potential of our approach for engineering personalized tissue and organ replacement in the future.”

A seemingly intoxicated Arkansas man went on a mini-rampage that included allegedly attacking a man with a box of pizza bagels and ended with him slapping a woman in a Wendy's. Roger Bridendolph is facing multiple charges after he allegedly had an altercation with dollar store employees in Springdale, Arkansas, and then ran into a nearby Wendy’s, where he slapped an employee. Bridendolph got into an argument with a cashier before attempting to steal the box of Bagel Bites. When a manager got involved, Bridendolph reportedly pushed his way out the store; the manager followed him outside and Bridendolph allegedly struck him in the head with the box of pizza bagels. The man then walked over to a nearby Wendy’s and slapped a woman inside the restaurant. According to witnesses, police struggled to detain Bridendolph when they arrived. It’s unclear what exactly sparked the various assaults. He is facing charges of felony robbery, misdemeanor second-degree assault, and resisting arrest. (https://fxn.ws/2JKWbeZ)

According to the Hackensack Fire Department, a New Jersey driver left a car wash on Tuesday — and plunged straight into the Hackensack River when she pressed on the gas pedal instead of the brake. Footage of the splashy incident shows the white Mercedes SUV exiting the auto wash around noon and nosediving into the river. The driver, and a female passenger, were able to escape from the vehicle. According to NorthJersey.com, one of them was transported to Hackensack University Medical Center with minor injuries. Officials were able to pull the car from the river at around 1:30 p.m.
(https://nyp.st/2SjWIbC)
THESE THREE THINGS!
What do these 3 things have in common:
an arrow, a leaf and a leg?
(Vanes/veins)