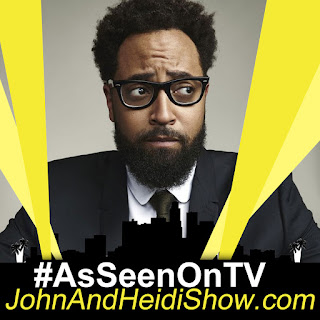 Emmy- and WGA-nominated writer and actor, producer, showrunner, and moonlighting DJ, Diallo Riddle has proven to be one of the most creative and multifaceted talents in the entertainment industry today.

ABOUT SOUTH SIDE ON COMEDY CENTRAL
South Side is an aspirational, scripted comedy set in and around the working class neighborhood of Englewood on the South Side of Chicago. The show follows two friends who just graduated community college ... so now they're ready to take over the world! But until they do they're stuck at Rent-T-Own, a retail-rental crossroads where the South Side's vast ensemble of characters come together. Despite the obstacles of inner-city life, these friends and their co-workers all strive to achieve their entrepreneurial dreams. Brought to life by local Chicagoans, both in front of and behind the camera, this show gives viewers an authentic portrayal of what life on the South Side is all about. It's evidence that what you see on the news is only a small piece of the city. It's written by Bashir Salahuddin (Glow) and Diallo Riddle (Marlon). Salahuddin, Riddle, and Michael Blieden - all Late Night with Jimmy Fallon alumni - are executive producers.
TRAILER: https://www.youtube.com/watch?v=ADn6qWVHZYU

ABOUT DIALLO'S OTHER SHOW, SHERMAN'S SHOWCASE ON IFC
A sketch variety show like none before, Sherman's Showcase travels through time via music and clips drawn from the forty-year library of a legendary (fictional) musical variety show. Inspired by shows like "Solid Gold", "Soul Train" and "Laugh-In".
The eight-episode series has it all: music, comedy, games, and dancing (executive produced by John Legend's Get Lifted Film Co). Guest stars include Marlon Wayans, Tiffany Hadish, Common, Quincy Jones, and Ne-Yo, to name a few.
TRAILER: https://www.youtube.com/watch?v=VaD8LhjaBtE.

A study out of Penn State University found that straight men who demonstrate environmentally friendly behavior are often confused as being gay by women.
(https://bit.ly/2Ki8YHh)

While handcuffed behind her back in the rear of a Kentucky squad car, a suspect removed a bag of narcotics from her private parts and snorted the white powder inside, according to police who arrested the woman on drug possession and other charges. Responding to a report about an intoxicated couple preparing to drive a car, cops in Winchester encountered 28-year-old Kathryn Ahlers and her boyfriend outside a vehicle on Main Street around 11:30 p.m. Friday. According to a court citation, Ahlers was attempting to remove her toddler from a car seat, but was unsteady on her feet. Ahlers, whose speech was slurred, told police that she and her companion became lost en route to Cincinnati from Lexington. Ahlers was handcuffed behind her back when she somehow “pulled a clear plastic baggie from her vagina cavity” and “dumped some white substance on the seat.” Ahlers then “began to inhale it through her nose.” Ahlers was charged with endangering the welfare of a minor, public intoxication, tampering with physical evidence, and possession of a controlled substance. (https://bit.ly/2yExOdE)

Universal Studios has pulled a film called “The Hunt” in which Liberal Elites hunt down and kill “Deplorable Trump Supporters.”(https://bit.ly/2Z1b6Y2)

Jennifer Garner likes to spend time in her kitchen — and is inviting one fan to join her there to bake cookies. The charity auction will award the grand prize winner and a friend a couple of round-trip tickets to LA, a stay at a luxury hotel, and some time in the kitchen baking cookies with Jennifer. All money raised will go to the Epilepsy Foundation. https://www.omaze.com/products/jennifer-garner-cookies-los-angeles?interprep&goal=0_c01849cdd6-4121e5945a-264008501

SCOOP OF THE DAY: Brought to you by BetterCreditCards.net
The widow of Columbian Drug Kingpin Pablo Escobar has a new book out in which she claims he wanted to get into politics. (https://bit.ly/2MU8oBi)

Former Heavyweight Champion Mike Tyson spoke to the Alabama football team about the importance of anger management over the weekend. (https://bit.ly/31sEqIs)

A senior citizen living and drinking alone in China was so desperate for conversation he drunk-dialed police almost 1,500 times over the course of a year. The lonely man would officers to come to his residence to help him resolve small crises, like forgetting where he put his keys.
A government report reveals that the cost of building the new F-35 fighter plane increased by another $25 billion last year due to requested design changes.
Earthlings, listen up: There are no fish, cannonballs, thigh bones, spoons or crab monsters on Mars. And there are no boots or robot legs. Just rocks. Lots and lots of rocks. The latest conspiracy theory NASA’s Mars Curiosity rover snapped a photo of the leg of an ancient robot. The boot-shaped object is actually a rock.
https://www.cnet.com/news/nasa-curiosity-rover-did-not-find-a-damn-robot-leg-on-mars/
They do social media different in most other parts of the world. Take Wales, where cops posted a mugshot of a drug dealer with a receding hairline. Social media users posted over 75,000 comments making fun of his noggin’ — until police reminded the citizens of Wales that “harassing, threatening and abusing people on social media” could get them arrested.

A sheriff’s deputy in Northern California was answering a call when a bear fell on his patrol car and destroyed it.

FUN FACT FOR YOU:
Share this with your friends... they'll think you're really smart!
60 Tons of Cosmic Dust Fall to Earth Daily. “Cosmic dust” sounds magical, but chances are you’ve inhaled a good amount of it just on your way to work. On a daily basis, dust from meteorites, comets, and other solar bodies fall to earth in tiny particles that increase the levels of sodium and iron in the planet’s atmosphere. Scientists studying the phenomenon estimate that altogether, about 60 tons of cosmic dust is falling to earth daily.

Russian officials are denying that the country suffered a nuclear accident after leaked footage surfaced of workers in hazmat suits cleaning up one of their reactors. (https://bit.ly/2TsEZzw)


WEIRD NEWS: Brought to you by WeirdGiftOfTheDay.com
A Florida man found himself behind bars after police say he had a live grenade in his hand when he was pulled over for a traffic stop. The DeSoto County Sheriff’s Office posted photos on Facebook, adding that narcotics officers stopped the vehicle driven by Donald Reid Jr. on Saturday. When they approached the vehicle, Reid had an M67 grenade with the pin in place located in the vehicle and told deputies it was “live.” Deputies called in the bomb squad from the neighboring Sarasota County Sheriff’s Office, who were able to safely remove and destroy the grenade. Reid was arrested and charged with multiple counts of possession of firearms and ammunition by a convicted felon.
(https://bit.ly/2YHXwNV)

A 49-year-old Ohio man who pleaded guilty last Thursday to throwing an iguana in a Perkins Restaurant was ordered to not go and brag about the incident, Painesville Municipal Clerk of Court Nick Cindric told cleveland.com. Judge Michael A. Cicconetti sentenced Arnold Teeter Thursday to 90 days in jail and suspended 77 of those days. The judge also gave him 13 days credit for the time he already served in jail. In the end, he will not serve any jail time, unless he breaks the law sometime during his five-years of probation. The judge also entered a handful of other stipulations. Tetters is not allowed to publicize about what he did or why he did it. He’s not allowed to seek media attention about the case and he can’t brag about what happened. He’s also required to pay restitution to the Lake Humane Society which cared for the injured lizard after the incident. (https://bit.ly/33sRGi8)
THESE THREE THINGS!
What do these 3 things have in common:
Baby, Goose, Speed (Answer: Bump)