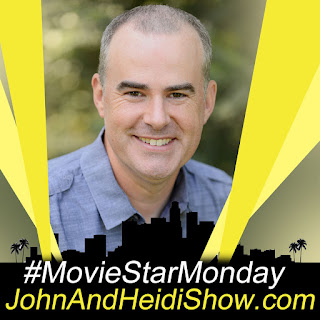 It's a #MovieStarMonday with Alex Kendrick. The new film from the Kendrick brothers, OVERCOMER, releases August 23. Their last film, WAR ROOM, made national news for weeks after its release when it surprised Hollywood by becoming the #1 movie in theaters in its second week.

OVERCOMER SYNOPSIS:
Life changes overnight for coach John Harrison when his high school basketball team’s state championship dreams are crushed under the weight of unexpected news. When the largest manufacturing plant in town suddenly shuts down and hundreds of families begin moving away, John must come to grips with the challenges facing his family and his team. Urged by the school’s principal to fill-in and coach a sport he doesn’t know or like, John is frustrated and questioning his worth… until he crosses paths with a student struggling with her own journey.

Filled with a powerful mix of faith, a twist of humor, and a ton of heart, the Kendrick Brothers return to theaters with OVERCOMER, their newest feature following FACING THE GIANTS, FIREPROOF, COURAGEOUS, and the #1 box-office hit, WAR ROOM. The inspiring family film stars Alex Kendrick, Priscilla Shirer, Shari Rigby, Cameron Arnett, and introduces Aryn Wright-Thompson.

Opening nationwide on August 23, OVERCOMER dares to leave you filled with hope, inspired to dream, and asks the question: what do you allow to define you?

A study by the University of Louisville found that snake bites have reached an all-time high in southern states. (https://on.wsj.com/2OEAing)

According to a police report, a Louisiana woman who fired several shots at a small airplane spraying for mosquitoes claimed that she thought that the manned aircraft passing over her home was a hobbyist’s drone. Cops allege that 40-year-old Stacy Nguyen Rodgers fired at the plane three times in an attempt to bring down the aircraft as it flew passes over her home in Monroe. When investigators questioned Rodgers, she confessed to shooting at “the drone” with a “revolver style pistol” that was confiscated by police officers. Cops noted that Rodgers was intoxicated when booked into the local jail. None of Rodgers's rounds hit their intended airborne target. Police determined that the plane Rodgers shot at was spraying for mosquitoes in an area where multiple “mosquito pools” have recently tested positive for the West Nile virus. (https://bit.ly/2yKky7p)

CNN Anchor Chris Cuomo has vowed to do better after flipping out on a man who called him “Fredo.” (https://bit.ly/2TtLJge)

The production crew from the show “Empire” was seen filming this week at the same Chicago location where Jussie Smollett claimed he was attacked.
(https://pge.sx/2OR9bFx)

SCOOP OF THE DAY: Brought to you by BetterCreditCards.net
Sony is celebrating the 40th Anniversary of its Walkman this week with special exhibits in Japan and throughout the world. (https://bit.ly/2MYSBRS)

A video of a Washington man landing a plane on a busy highway after it lost power to its engines has gone viral. (https://bit.ly/2P8NilB)


Lucky Charms is selling bags of “just marshmallows” for two dollars. The company says they’re “a bigger and puffier version” of the original marshmallows. These bags have 100 grams of sugar in them.
(https://bit.ly/2Me33oV)

A growing number of protests have sprung up across Russia as Vladimir Putin’s popularity continues to dip. (https://bit.ly/2TuaQQ2)

Nike is launching a sneaker subscription in America for kids that will give them a new pair every month. (https://bit.ly/31Ikdyr)

A Bankrate survey found that 42% of Americans say they can’t afford a vacation. (https://bit.ly/31OtHsn)

A new survey claims that the average U.S. Farm is $1.3 million dollars in debt.
(https://bit.ly/2TsNRoF)

FUN FACT FOR YOU:
Share this with your friends... they'll think you're really smart!
Earth Once Had Two Moons. That’s the theory at least, put forward by a computer model that attempted to figure why the side of the moon that faces Earth is relatively low and flat and the one that faces away has a much thicker crust. The model suggests that there was once a “companion moon” that collided with the far side of our current moon.


NEWS HEADLINES... FROM SOMEWHERE IN THIS WORLD!

The President of Brazil is urging residents to poop every other day in an effort to save the environment. (https://dailym.ai/2yVNgCw)


WEIRD NEWS: Brought to you by WeirdGiftOfTheDay.com
Officials say that Puerto Rico’s doubles bowling team was stripped of its gold medal at the Pan American Games over the weekend after one of its players failed a doping test. Jean Perez Faure tested positive for chlorthalidone, which is a diuretic that acts as a masking agent and is on the World Anti-Doping Agency’s (WADA) list of banned substances. The decision meant that the U.S. team of Jakob Butturff and Nick Pate won the gold medal. Colombia and Mexico won silver and bronze respectively. Out of 1,200 tests conducted at this year’s Pan American Games, Faure had the second failed drug test. Dominican baseball player Audrey Joel Perez had previously tested positive for an anabolic steroid. The U.S. finished with the most medals at the Pan American Games with 293. Brazil was second with 171 and Mexico was third with 136.
(https://fxn.ws/2KJa9i8)

A young driver allegedly pushed into a river this BMW he got from him parents — because he wanted a Jaguar. The man, named locally only as Akash, is alleged to have pushed the brand-new car after he got upset it was "too small" for him and his pals. A video shows the car sinking beneath the water in Yamunanagar, Haryana state in northern India. It had to be pulled out using a crane. Locals said that he jumped out of the vehicle just before it reached deeper water and onlookers helped him to safety. A police official said: “The youth was arrogant and kept insisting that he be given a Jaguar as a BMW is a little small for him and his friends inside. We would do a preliminary investigation but this seems to be a personal matter. We will proceed according to the law.” The boy's father said, “I wanted to give my son a birthday present. We could only afford to give him a BMW, while he kept on insisting that he be given a Jaguar. He said the vehicle was too small but we thought he will be okay. We never imagined he would do anything like this.” (https://fxn.ws/33rYE78)
THESE THREE THINGS!

What do these 3 things have in common:
Search, Fire, Auto (Answer: Engine)