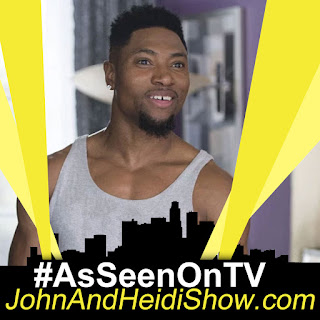 We visit with London Brown, a trained comedian, actor and dancer. He stars on the HBO series "Ballers" opposite Dwayne "The Rock" Johnson. Previously he was the lead in "The Hustle" for The Fuse Network. He just won Best Actor for his role in Asia A at the Overcome Festival and won Best International Comedian at the 2013 Black Comedy Awards in the UK. Also opened for Chris Tucker and many other headliners, currently headlining his own comedy tour. The Comedy-drama “Ballers” returns for season five on HBO Aug. 25. https://www.hbo.com/ballers

A study in the Lancet Medical Journal found that scientists are close to having a vaccine for chlamydia.(https://yhoo.it/2YOX3d1)

According to a Police Chief named Ron Tischer, a car thief was caught after she ran out of luck— or battery, precisely. Kathy Sain was pursued by cops after she stole an electric Tesla from a shopping center parking lot in Payson, Arizona. The thief evaded spike strips but the stolen car came to a halt after it ran out of power. There is a Tesla charging station in the shopping center, but it is unclear if the vehicle was being charged when it was stolen by Sain. “Spike strips were ineffective but the vehicle ran out of electricity on East Highway 260,” Tischer was quoted as saying. “The suspect refused to exit the car and troopers and deputies were forced to break a window to get the suspect out.” Sain was arrested on several charges including theft, fleeing pursuing law enforcement vehicles, criminal damage, and aggravated driving under the influence. (https://bit.ly/2KJ7k0x)


SCOOP OF THE DAY: Brought to you by BetterCreditCards.net
A California man died after a taco eating contest at a minor league baseball game. (https://abc30.tv/2Z5B2WA)

The makers of Four Loco announced that the company is going to begin selling a hard seltzer that’s 14% Alcohol by volume. They haven’t set a release date for the drink, but each can is 100 calories. (https://cbsn.ws/2yYq0nv)

Mike Tyson revealed that he and his friends smoke $40,000 worth of weed per MONTH at the marijuana farm where he’s now a board member.
(https://cnn.it/2KxdK3D)

A video of a girls basketball player hitting three backwards three pointers in a row WITHOUT LOOKING has gone viral. Her name is Leah Church and she’s a junior on the North Carolina women’s Basketball team. She’s a state record holder in free throws and three pointers. (https://abc11.tv/305U5NF)

A new study found that nearly half of Americans don’t change their underwear on a daily basis. (https://bit.ly/30fXutt)

A Phoenix woman claims she visited a “cuddle therapist” and he tried to turn the situation sexual. (https://bit.ly/2Pi8ntV)

California’s two biggest cities, San Francisco and Los Angeles, are trying to deal with an overwhelming amount of human poop on their sidewalks.
(https://on.wsj.com/2KEL09q)

FUN FACT FOR YOU:
Share this with your friends... they'll think you're really smart!
If you’re looking for a seriously steep cliff, you’ll find it on Canada’s Baffin Island in Auyuittuq National Park in the northern part of the country. Named Mount Thor, it has a 4,000-foot rock face that has proved daunting for climbers, with 30 attempts made before a four-man team from America finally succeeded in 1985 (it only took them 33 days).

A Russian pilot was able to successfully land a flaming commercial airliner in a cornfield and save all 233 people on board after several birds got stuck in its engines.(https://dailym.ai/2TxyL1g)

Texas cops are hunting a woman dubbed “The Wedding Crasher” after she allegedly stole thousands of dollars in gifts from at least a half-dozen newlywed couples. According to the Comal County Sheriff’s Office, the avowed thief executes the stunt by dressing as a wedding guest and sneaking into the reception where she snatches up envelopes full of cash, checks, and gift cards. Authorities first became aware of the matrimonial mugger when she hit up nuptials in Spring Branch last November. Since then, she’s struck at least five more times, mostly at the same venue. Investigators said they’ve obtained surveillance footage from several shops showing the sacrilegious swiper using the allegedly stolen gift cards. Cops are still working to count up the losses, but they estimate the total is in the thousands of dollars.(https://bit.ly/2Z75fEF)

According to a Pennsylvania court filing, a suspect who used a stolen debit card to purchase a cell phone, beer, and cigarettes signed the sales receipts as “Thief.” Police report that the male suspect swiped the card from a woman who gave him a ride home from a bar last week. The debit card was inside a purse in the center console of the woman’s vehicle. The victim, Joei Thompson, noticed the purse was missing the following day and filed a report with police in Butler, a Pittsburgh suburb. But Thompson’s debit card had already been used to purchase a $200 iPhone 6S at a MetroPCS store and a case of beer and pack of cigarettes from Butler Beer and Tobacco. When cops examined the sales receipts for the two transactions, they discovered that the purchaser signed his name as “Thief.” Police eventually charged 36-year-old Ewari Ellis with stealing the victim’s debit card. (https://bit.ly/2TBNyrF)
THESE THREE THINGS!

What do these 3 things have in common:
Lime, Spot, Flash (Answer: Light)