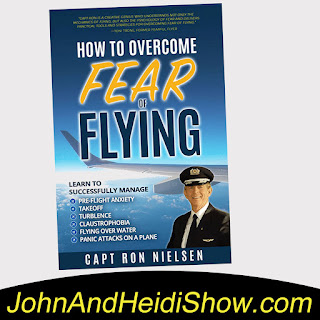 Capt Ron is an internationally recognized fear of flying expert. An Air Force Academy graduate with a tour in Vietnam, Captain Ron Nielsen accumulated over 20,000 flight hours during his career as a commercial pilot flying a Boeing 737. He is author and creator of Chicken Soup for the Soul Presents The Fearless Flight Kit. As an aviation industry expert, he has been featured on The Today Show,, NBC’s Nightly News, CSNBC, and MSNBC.

His NEW BOOK How To Overcome Fear of Flying is available on Amazon for pre-orders - https://amzn.to/2Zvo40u

A study by BYU found that having a digital assistant in your home can make your kids ruder. (https://bit.ly/2z9nkDw)

A 23-year-old Floridian is jailed on a pair of felony narcotics charges for allegedly possessing the opioid fentanyl and “five orange tablets in the shape of Donald Trump’s head marked Trump NL.” The seized Trump pills appear similar to tablets that have been manufactured in Europe and have prompted “high dose” safety warnings due to their elevated level of MDMA. Police found the drugs inside an air vent in the Clearwater apartment of Brendan Dolan-King. Cops went to the home “in reference to an overdose” and were given permission by Dolan-King to search the residence. Dolan-King was charged Friday with the narcotics raps after lab tests confirmed that a tan powder seized was fentanyl and that the Trump pills contained MDMA. Dolan-King has been in custody since late-June--when the drugs were found--on marijuana possession with intent to sell and probation violation counts.
(https://bit.ly/2NkoHr4)

Lori Laughlin and her designer husband are reportedly being shunned by their Bel Air friends because of their involvement in the college bribery scandal.
(https://pge.sx/2L4eDQq)

Angelina Jolie dropped her son Maddox off at college in South Korea this week.
(https://pge.sx/2Mx2tTi)

SCOOP OF THE DAY: Brought to you by BetterCreditCards.net
Weight Watchers is being attacked on Twitter for releasing a weight loss app for kids. (https://fxn.ws/2KYqoI8)

Little Caesars has just unveiled a QUATTRO PIZZA that comes in four sections for groups of people who can’t agree on which toppings they want.
(https://bit.ly/2NqfiP6)

A group of International Researchers have been studying the Loch Ness Monster and are going to reveal their findings during the first week of September. (https://bbc.in/2NoxbxC)

FUN FACT FOR YOU:
Share this with your friends... they'll think you're really smart!
Rocks Can Walk. If a storm gets going intense enough, it can make it look as if rocks are “walking.” That’s been documented multiple times in California’s Death Valley, where conditions can occasionally be just right—not too sunny, with steady winds and standing water—for rocks, sometimes weighing hundreds of pounds, to appear to move on their own.

The BBC is reporting that the newest images of the Titanic show SHOCKING decay. Regardless, the images of the real Titanic are going to be shown on the BBC this weekend. (https://bit.ly/33Q7ADv)

An Oakland Park, Florida man attacked a jogger with a sword in an attempt to protect a plastic dump cart that had been thrown out in the trash. The big stink started July 15th when the runner stumbled upon a pile of garbage in front of a house, and decided to grab the black heavy-duty wagon. That’s when the rabble-rouser got upset — because he wanted the cart. The two “exchanged words” but the jogger took the item anyway. When he got home, he realized the litter-lover had followed him. Video shows the junk-diver unsheathing a sword and swinging it at the jogger. But the runner isn’t thrown off — and ducks the blows while keeping a hold on the cart. When he tells his attacker the fight is being filmed, the waste-watcher strides off, sword and sheath in hand. Moments later, a woman who cops think knows the suspect, can be seen coming back and dragging the cart away, while flinging insults at the runner. Police are asking for help finding the sword-swinger or the woman. (https://bit.ly/33Obo87)

Several Kansas City, Missouri, residents were freaked out Wednesday when they spotted a shirtless man lugging around what appeared to be a topless, unconscious woman — but in reality was just a life-sized doll. Police said they received multiple calls starting around 11:20 a.m., about the suspected creep, who according to one person, looked like he wanted to throw a helpless, half-naked woman off of a bridge in the Garment District of the city. Another caller said the man had dumped a lady on the sidewalk and dragged her over a curb. One person said it looked like the guy was trying to dress the woman, whom he’d slung over his shoulder. The ‘woman’ was actually a blow-up doll that the would-be perp said he found in a restaurant dumpster. Photos from traffic cameras show the half-naked man dragging the pink dress-wearing female figure around town. Cops said, “He was told not to carry it around in public anymore.” (https://bit.ly/2Zgb7HT)
THESE THREE THINGS!
What do these 3 things have in common:
Glenn, Henry, Harrison (Answer: Ford)