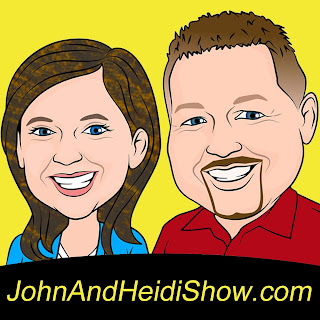 Today we're going to visit with Plastic Surgeon, Michael Salzhauer MD... also known as Dr. Miami! About Brazilian Butt-lifting... and the dangers that can come with this popular procedure. https://drmiamiconnect.com/

Here is the association site for WAGS - https://glutealsurgeons.org/

A study by the University of Copenhagen found that overweight people are more likely to have overweight dogs. (https://bit.ly/2kGDIIc)

A Pennsylvania woman was arrested last week for drunk driving after police say she showed up at the station “intoxicated” while coming to pick up her boyfriend, who had been arrested on a DUI charge. 30-year-old Kristen Lee-Ann Robbins was arrested Thursday on one count of driving under the influence after allegedly driving her car to an area close to the Chambersburg police station. Police said she walked the rest of the way there. “Kristen Robbins came to the police station to pick-up her boyfriend who had been arrested for DUI. Robbins was found to be intoxicated,” police said in a press release Tuesday. She was taken into custody on a DUI charge. It was not immediately clear if she was still in police custody Tuesday. (https://fxn.ws/2lUoGie)

The author who created Rambo in the novel “First Blood” says the new movie left him feeling degraded and dehumanized. The man’s name is David Morrell and he tweeted that he’s embarrassed to have his name associated with the film. Sylvester Stallone is 73, critics are saying it’s too violent because he kills too many people. (https://bit.ly/2m6cU4s)

Ratings were down over 10% for Sunday telecast of the Emmy Awards.(https://bit.ly/2kZMsZZ)

Sean Spicer has launched a new website that urges fans to vote him to victory on “Dancing With The Stars.” (https://bit.ly/2muk2rr)

A video of a plane that landed on a car in Maryland has gone viral. The good news is that nobody got hurt. (https://bit.ly/2mfly0s)

71-year-old Stephen Tyler has a new 32-year-old girlfriend and kissed her on the Red Carpet of the “Ad Astra” premiere in Hollywood Thursday. (https://pge.sx/2kV8T2f)

Backstreet Boy Nick Carter says he filed a restraining order against his brother Aaron Carter because of his obsession with guns.(https://pge.sx/2kJ7xI6)

FUN FACT FOR YOU:
Share this with your friends... they'll think you're really smart!
So far, two diseases have successfully been eradicated: smallpox and rinderpest. The last naturally occurring case of smallpox was diagnosed in October 1977, and the last case of rinderpest was diagnosed in 2001.

A woman on a visit to Iceland has managed to add new twist to the concept of “self-discovery” after taking part in a major mountain search operation for a lost tourist before admitting to police that she was the missing person everyone was looking for. The bizarre mix up occurred last Saturday in Iceland's southern volcanic region near the island's Eidgja canyon, a remote but popular walking area for visiting tourists. The woman in question was reported to have failed to return to her tour bus. The tour company driver waited for an hour. When the woman failed to turn up, he alerted police and search teams were dispatched to the area shortly afterwards. They started combing the barren treeless hillsides looking for an Asian woman described as 5ft 2in and wearing dark clothing. The expedition was only called off at 3:00 a.m. after it emerged that the woman had been on the bus all along and had even participated in the search, having had no idea that she had been reported missing. Before getting back on the bus, the “missing” tourist had apparently changed her clothes and “freshened up.” Her fellow passengers and the driver did not recognize her as being the same woman. (https://bit.ly/2kjYrRI)


WEIRD NEWS: Brought to you by WeirdGiftOfTheDay.com
A skateboarder busted yesterday for allegedly causing a disturbance at a Florida mall blamed a “miniature Paul Blart” for his arrest. 23-year-old Patrick Thompson told police that after briefly skateboarding inside the Indian River Mall, he was confronted around 4:00 p.m. by guard Sean Pisanelli, who announced, “You’re going to jail, punk.” When cops arrived at the mall, Pisanelli said that Thompson had been “swearing and calling names” in front of the Chick-fil-A in the food court. Thompson claimed to be unaware that skateboarding was not allowed inside the mall. When confronted by Pisanelli, Thompson told a sheriff’s deputy, he called the security guard “a miniature ‘Paul Blart’ and a ‘Dumbass.’” Thompson was charged with disorderly conduct and trespassing, both misdemeanors, and booked into the county jail. He was released from custody after posting $1,000 bond. (https://bit.ly/2kR0aOI)

The next time Ariauna Lillard decides to destroy some love letters from an ex-boyfriend, she will probably opt for a shredder, not a small butane torch. According to police, the 19-year-old Nebraska woman set a fire in her Lincoln apartment Monday afternoon that caused $4000 in damage. Investigators say Lillard attempted to torch a small batch of love notes, but when the paper did not appear to catch on fire, she placed the notes on a bedroom carpet and proceeded to take a nap. What Lillard did not realize was that the letters apparently were smoldering as she dozed off. Her sleep was subsequently disrupted by the sound of a smoke detector going off in the third-floor apartment. Lillard awoke to the bedroom carpet in flames. Lillard, who was alone in the residence, escaped without any injuries, and the flames were quickly doused by Lincoln firefighters. The fire did not damage any other units in the rental complex. Cited for negligent burning, Lillard is scheduled for an October 16 court appearance. (https://bit.ly/2kIdvcf)
THESE THREE THINGS!
What do these 3 things have in common:
ATHENS—SPARTA--THEBES?... (City-States in Ancient Greece)