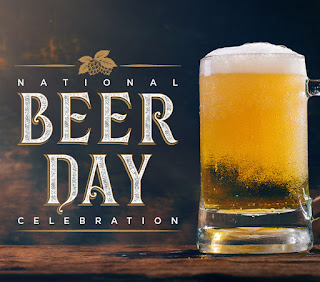 This Sunday, October 27th, beer drinkers across the country will celebrate National American Beer Day, a fun holiday that pays homage to the nation’s more than 7,000 breweries and their loyal patrons. We're going to visit with Zach O’Haire, one of only a few thousand Certified Cicerones in the world, joined forces with Cambria Hotels in 2017 to help the brand curate a unique selection of craft beers at each hotel across the country as part of the its hallmark Local Craft Brew Program. As Cambria’s Certified Cicerone, Zach travels the country to build relationships with breweries in the communities in where Cambria hotels are located, hand-select craft brews for each hotel’s menu, and train hotel staff how to properly serve each beverage. CHOICEHOTELS.COM/CAMBRIA

SURVEYS, STUDIES & SUCH: Brought to you by BetterCreditCards.net
A study from Switzerland found that taking unscheduled naps may help fight heart disease and strokes. (https://bit.ly/2MDWif0)
THIS IS YOUR BRAIN ON DRUGS:
Brought to you by TimeForRehab.com! Each day we talk about people doing dumb things under the influence, but addiction is no laughing matter… if you or someone you know needs help, we're here to help! You can learn more at TimeForRehab.com.

According to police, San Diego Padres pitcher Jacob Nix was arrested Sunday for criminal trespassing after trying to get into an Arizona house through a doggy door, prompting a resident of the home to kick him and use a stun gun on him. 23-year-old Nix is accused of entering a fenced backyard in Peoria, about thirteen miles north of Phoenix, and then trying to climb through a doggy door in the back of the house. Nix was kicked in the face by someone inside the home before fellow baseball player Tom Cosgrove, who plays for a minor league team, tried to pull him out. As the pair began running away, the person inside the home "leaned out of the doggie door and deployed his taser," hitting Nix in his torso. Police were called to the scene and found Nix and Cosgrove a couple blocks away from the house. The two were arrested. Nix told police that he thought he was at his own home, even though he doesn't have a doggy door and usually enters through the front door. He could not explain and would not elaborate further why he tried to enter someone else's house. Court documents said he was under the influence of drugs or alcohol. (https://nbcnews.to/33sJ1eS)
BIG SCREEN-LITTLE SCREEN: Brought to you by ChannelSurferTV.com

Francis Ford Coppola joined Martin Scorsese in bashing Marvel Movies, saying he doesn’t think anyone learns anything from watching the same movie over and over again.(https://yhoo.it/32sHiWO)

SCOOP OF THE DAY: Brought to you by SingleStudentLoan.com A 2,000 year old road that was built by the Biblical Figure Pontius Pilate was discovered in Jerusalem. (https://on.natgeo.com/2MEYins)

The Who’s Rock Opera, “Tommy,” is returning to Broadway. (https://bit.ly/2o7npWj)

Rage yoga has been around for a few years, but you know how trends go — they start out in LA or New York and, eventually, make their way to the Midwest. If you’re not familiar with rage yoga — heck, even Canadians had it four years ago — instead of calming your mind, you’re bringing everything out with loud, explicit music playing as participants yell, scream, cuss and make obscene gestures.

FUN FACT FOR YOU:
Share this with your friends... they'll think you're really smart!
In Uganda, around 48% of the population is under 15 years of age. Of the 41 million inhabitants, nearly half of those are youths. If you were to expand the age to just 30, that brings the percentage up to 77%!

NEWS HEADLINES.... FROM SOMEWHERE IN THIS WORLD!
Dateline.... ChinaA Chinese official charged with corruption attempted a getaway disguised in shabby clothes and riding a tricycle with two bags stuffed with $245,000 in cash. The man was caught near his home after being spotted at a local farmer’s market.

WEIRD NEWS: Brought to you by WeirdGiftOfTheDay.com
A former inmate who legally changed his name to “Nobody” is running for mayor of the town of Keene, New Hampshire. Nobody — formally Richard Goyan Paul — is competing with two city councilors in a non-partisan primary for one of two slots in a general November election. Despite admitting he is a long-shot, the 50-year-old told the paper that he is even considering a Republican primary challenge against New Hampshire Gov. Chris Sununu next year. The “cannabis freedom activist” has been arrested eleven times and incarcerated for at least sixty days, the Globe said. He said that his main policies are to lower taxes and have an open-door policy for anyone with complaints about cops. “I am getting a lot of good response,” said Nobody. “The last time that I went to the liquor store there is this guy in there and he says ‘you are running for mayor’ and I am like ‘yeah I am.’ I was like ‘groovy.’” (https://bit.ly/2P5JtvL)

An Illinois man under investigation for forgery was busted for giving a fake name to police — even though his real name is clearly tattooed across his neck. Cops in the city of Mattoon were speaking to 36-year-old forgery suspect Matthew C. Bushman, of Mansfield — who has “Matty B” tattooed in black ink across his throat — when he tried to pass himself off as someone else on October 8th. He also gave an incorrect date of birth to throw cops off. Bushman, cops said, was trying to dodge an arrest on an active warrant in Peoria County. According to police and jail records. he was arrested on October 11th and booked into the Coles County Jail on charges of forgery and obstructing justice.
(https://bit.ly/2oUsUby)

FAKE NEWS.... OR FLORIDA?!
I read a headline and Heidi (and you) need to guess if the story is FAKE NEWS or something that really happened in the state of FLORIDA.
A Sarasota mom was arrested for indecent exposure after she mooned the principal at her daughter’s school to protest a clothing policy ….. FAKE NEWS
Newer Post Older Post Home