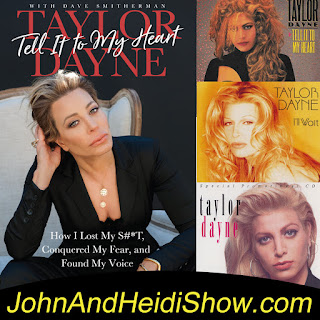 Today we talk with music icon Taylor Dayne. She has been creating music since the 1980s. Touring the world and selling MILLIONS of albums, she has finally complied some interesting stories for her very first book. Tell It to My Heart: How I Lost My S#*T, Conquered My Fear, and Found My Voice
Available now https://amzn.to/2pmNEs2

A Fintech survey shows that more Americans are financing high end sneakers than ever before.(https://on.wsj.com/2onaBen)

A Greek Cypriot convict returning to prison after being taken to court for a different case was caught with four mobile telephones hidden in his person. It said that the 28-year-old man who is serving time for burglaries was taken from Central Prison to Limassol court where he is on trial for driving under the influence of drugs. The site said that while at court, he obtained four mobile phones and a quantity of drugs which he hid in his rectum. During checks on his return to prison, wardens found he had something hidden in his body. He was taken to Nicosia Hospital and once the items were expelled, he returned to jail. (https://bit.ly/2mAjdxm)

“Fast And The Furious” director Rob Cohen is denying the sexual assault allegations against him. (https://pge.sx/2oDnile)

The NFL continues to face a rash of empty seats as we're into week five.
(https://bit.ly/2m8YIYA)

SCOOP OF THE DAY: Brought to you by BetterCreditCards.net
A Polish Daredevil has abandoned his bid to ski down Mount Everest because of the giant sheets of ice that have formed near the summit.
(https://yhoo.it/2mJLKB1)


A newly released video shows Stacy Dash telling Florida cops that she starred in the movie “Clueless” as they arrested her for domestic assault.
(https://pge.sx/2oegDxU)

Here’s the latest story in social media outrage: Kanye West is being slammed by Christian Groups for religious services in which he calls himself God.
(https://bit.ly/2n0WStu)

Empty nesters are struggling to cut the apron strings, according to a new study.
55places surveyed 1,800 parents whose adult children have left the "nest," and found 40% are still financially supporting them in some capacity. Beyond monetary assistance, 1 in 3 empty nester says they talk to their kids daily, and many are receptive to the idea that their adult children could return home. Survey highlights include:
Overall, the majority of empty nesters say they're able to put away more money since their children moved out, but 1 in 4 say retirement savings remains the #1 financial stress for them.
To learn more about their financial situation, take a look at the published report here https://www.55places.com/blog/survey-reveals-empty-nesters-still-supporting-children-financially

FUN FACT FOR YOU:
Share this with your friends... they'll think you're really smart!
The average life expectancy is just over 70 years, which gives a maximum of 51,100 liters of saliva produced in an average lifetime. This is more than enough to fill two swimming pools.

Authorities in Greece are investigating a fire that started inside a migrant camp. (https://bit.ly/2owzHYp)


WEIRD NEWS: Brought to you by WeirdGiftOfTheDay.com
A pair of thieves pilfered a load of “bull penises” from a Canadian pet store, the shop announced. The duo allegedly swiped hundreds of dollars’ worth of the dog treats — also known as “Pizzles” — from one of the Pet Zone shops in Newfoundland and Labrador. “We have video surveillance of them grabbing as many penises as they can and taking off!” the chain posted to Facebook. They tried to target a second store in the Pet Zone chain, but left empty-handed. The male suspect was last seen wearing a gray hoodie, and had stars tattooed on his neck. The woman changed between visits but had a tattoo on her temple, possibly a spiderweb. Anyone with information is asked to message the pet store on Facebook or contact the Royal Newfoundland Constabulary.
(https://bit.ly/2ohnAhq)

A woman in Spain asked a friend to look after a box of adult ‘toys’ for her. She told the friend that she didn’t want police to find the box of embarrassing items during a raid. Police were going to search the woman’s home following the ‘voluntary’ disappearance of her partner. But the friend immediately noticed a bad smell coming from the box and, when she got it back to her home, opened it up… and found a rotting human head.
THESE THREE THINGS!
What do these 3 things have in common:
CRIMINAL TYPE--SUNDAY SILENCE--BLACK TIE AFFAIR?...
(Former Horse of the Year winning racehorses)