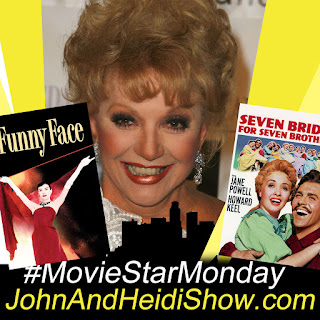 It's a #MovieStarMonday! We talk to Hollywood Legend Ruta Lee... she appeared as one of the brides in the musical Seven Brides for Seven Brothers. She had roles in films including Billy Wilder's crime drama Witness for the Prosecution and Stanley Donen's musical comedy Funny Face and also is remembered for her guest appearance in a 1963 episode of Rod Serling's sci-fi series The Twilight Zone called "A Short Drink from a Certain Fountain".


Lee guest-starred on many television series, and was also featured on a number of game shows, including Hollywood Squares, What's My Line?, Match Game and as Alex Trebek's co-host on High Rollers.

She is completing a new book called “Consider Your Ass Kissed” to be published soon! - https://www.imdb.com/name/nm0498181/

An EVITE survey found that the average American hasn’t made a new friend in five years. (https://bit.ly/2MEcVpV)

Doing the splits is not part of a sobriety test, but that didn't stop a man who was pulled over in Sterling Heights, Michigan. His impressive flexibility was not enough to keep him out of jail. “Do you have any issues with your legs or anything like that?” the police officer asked the suspect, asking him to put one foot forward. “I don't think so,” the suspect answered. “I can go like this” - and he went down into the splits on the side of the road. 53-year-old Michael Axelson was spotted speeding and swerving near Ryan and 15 Mile on Sept. 19th. His blood-alcohol level was .21, which is more than twice the legal limit. We're told this was Alexson's eighth DUI arrest. Police recently released their dashcam video of the traffic stop. Right now, Axelson is free after posting bond. He's on a tether and is due in court later this week (https://bit.ly/2oZpiEL)

Dr. Drew Pinksy was the first contestant eliminated on “The Masked Singer.”
(https://yhoo.it/2pXX2CJ)

Oprah Winfrey told People magazine that she doesn’t regret the fact that she and Stedman never had kids.(https://dailym.ai/310QCj7)

SCOOP OF THE DAY: Brought to you by BetterCreditCards.net
Arby’s is selling its own line of Octoberfest Fashion that you can pick up at any of their local stores. (https://bit.ly/2VtgVxb)

Republic Airways fired a male pilot and a female pilot after they were seen fighting on a runway in Denver. (https://bit.ly/2IByWUZ)

A video of a car that crashed into a bar in Portland has gone viral. The place is called “The Kombucha Tap Room.” (https://bit.ly/314KvKx)

Environmentalists are pressuring Charmin Toilet Paper to use recycled paper in its products so they stop killing so many trees. But Charmin hasn’t done anything yet. (https://cbsn.ws/2q3uKab)

A study in the Harvard Business Review found that 50% of Millennials have quit a job for mental health reasons. (https://fxn.ws/3143N2L)

A 71-year-old Florida man was arrested for spraying his female neighbor with a water pistol that was filled with urine. (https://bit.ly/2Vqg0Of)

A video of a balloon floating away as a couple tried to break it during their gender reveal has gone viral. (https://on.today.com/325g1JX)

FUN FACT FOR YOU:
Share this with your friends... they'll think you're really smart!
A baby spider is called a spiderling. Spiders aren’t cute, but this name kind of is! Spiderling is the official name for immature spiders. On top of that, spiderlings are often born in groups of thousands!
NEWS HEADLINES.... FROM SOMEWHERE IN THIS WORLD!

Dateline.... Spain
The city of Madrid is planning out the ethical slaughter of its parakeet population, which has tripled since 2011. (https://cnn.it/323CDuf)

A Florida man was reportedly arrested for trying to get an alligator drunk after his pal captured the reptile. 27-year-old Timothy Kepke of Hobe Sound allegedly fed some beer to the animal, which also bit him, on August 26th in Palm City. Moments earlier, Kepke told police that 22-year-old Noah Osborne caught the gator with his bare hands. Kepke told authorities he had consumed a few beers that day, but claimed he wasn’t intoxicated during the incident. After the beer feeding, which was recorded, the duo released the animal back into the wild. Authorities obtained the video, though it’s unclear how, and on September 17th confronted Kepke at his home, where he copped to the crime. Both Kepke and Osborne were arrested on October 3rd and charged with unlawfully taking an alligator.(https://bit.ly/31X8gFR)

An elderly Florida kook who used a water pistol filled with his own urine to squirt a female neighbor in the face has been convicted of battery, but will only serve a month in jail for the vile attack. 71-year-old Joel Benjamin entered a no contest plea to the misdemeanor charge during an appearance last Thursday in Circuit Court. He was sentenced to thirty days in jail and a one-year probation term that will commence upon his release from the Pinellas County lockup. Benjamin was also fined about $1,000 and ordered to have no contact with the 50-year-old victim, who was attacked in mid-April while walking her dog one evening outside the Gulfport housing complex where both she and Benjamin reside. As detailed in a criminal complaint, Benjamin approached the woman and “pulled out a water gun that contained his own urine” and squirted her “several times.” During police questioning, Benjamin showed no remorse, saying that he would “do it again.” (https://bit.ly/2Vqg0Of)

FAKE NEWS.... OR FLORIDA?!
I read a headline and Heidi (and you) need to guess if the story is FAKE NEWS or something that really happened in the state of FLORIDA.
A St. Petersburg man was busted for DUI on a hoverboard after he rode pantless through a pedestrian mall ….. FAKE NEWS