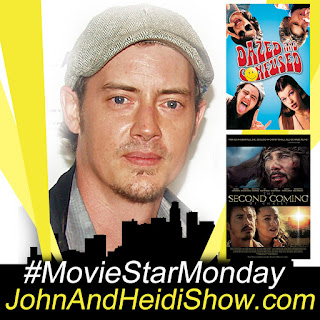 It's a #MovieStarMonday! We talk to Jason London, best known for his role as Randall "Pink" Floyd in director Richard Linklater's film Dazed and Confused.

His new faith-based sports drama Full Count, is in theaters and on VOD now.

For more information on FULL COUNT, go to www.FullCountFeature.com

A British study yielded the first medication that can slow down Alzheimer’s Disease. (https://bit.ly/2Nk2Peb)

A Florida man named Samuel L. Jackson (not the actor) was arrested on DUI charges and corruption by threat against a public servant in Palm Bay. Police were alerted to an incident involving a vehicle crash with injuries on Jupiter Boulevard and Caballero Avenue around 6.30 pm local time last Friday. 43-year-old Jackson, who had been driving one of the vehicles involved in the crash, showed signs of impairment, police say, which included rapid speech and bloodshot eyes. Officers report noticing the smell of alcohol during their interview with Jackson, although he claims to have had nothing to drink. Police said that he turned aggressive after his arrest yelling profanities and intimidating an officer on the journey to the local hospital, who he threatened to shoot while continuing to shout obscenities. When he arrived at the hospital, he was given medications including ketamine to calm him down. He has since been arrested for driving under the influence in addition to charges of corruption by threat against a public servant. (https://bit.ly/2IXDTYl)

Ben Affleck is reportedly looking for love on the dating app, “RAYA.”
(https://pge.sx/2Wbxpua)

SCOOP OF THE DAY: Brought to you by SingleStudentLoan.com
A tech firm is studying the effects of employees working a five-hour work day.
(https://on.wsj.com/2pPksdw)

A Haunted House in Summertown, Tennessee is said to be so scary, customers are forced to sign a waiver and they’re given a safe word if it gets too upsetting.
(https://bit.ly/2BCjSTd)

The NYPD is looking for a brute who shoved a woman into an oncoming train Thursday. Luckily, she’s okay. (https://bit.ly/2NedWVG)

A video of a naked man who stole a flag off of a sightseeing Yacht in Florida has gone viral. The sightseeing boat was called “The Lady Atlantic.”
(https://bit.ly/31Cw2Gh)

Meghan Markle said in a newly released interview that she had no idea what she was getting herself into when she married Prince Harry. (https://pge.sx/2N7MzN1)

FUN FACT FOR YOU:
Share this with your friends... they'll think you're really smart!
Recycling one glass jar saves enough energy to watch television for 3 hours. Yup, that’s how important recycling is! The average person has the chance to recycle 25,000 cans in their lifetime – that’s 75,000 hours of television!

NEWS HEADLINES.... FROM SOMEWHERE IN THIS WORLD!
Dateline.... Mexico

Mexico is desperately trying to get its soccer fans to stop chanting homophobic slurs every time a gay player touches the ball. (https://yhoo.it/35Z8KxF)


WEIRD NEWS: Brought to you by WeirdGiftOfTheDay.com
According to an arrest affidavit, police arrested an Austin man accused of stealing fifty-seven pairs of women’s underwear from a laundry room at St. Edward’s University. Last week officers took 27-year-old Jacob Davidson into custody following a traffic stop. During the stop officers found two wigs and the underwear inside Davidson’s car. On October 1st, St. Edward’s police received a report of theft from the Community Building One laundry room. A victim told police a man was wandering near the laundry room and “thought it was strange because he didn’t have any clothing with him.” A day later another victim told police she too was missing undergarments from the laundry room. She said she saw a white man in his late 20s wandering near the laundry room. She reported he left in a small, white car. Caroline Kirschner and Faith Golz are both on the soccer team and both had underwear taken. Several other women on St. Edward’s sports teams also reported missing bras and underwear. Police say two victims were able to identify several of the undergarments found in Davidson’s car. (https://bit.ly/2W8Dasw)


Illinois man Ke Hu has been charged with smearing feces on multiple parked cars last summer . According to Chicago Cops, the Chicago resident was busted October 15th after cops fingered him as the suspect “wanted for using feces and food to deface vehicles and storefronts” during a June spree. 46-year-old Hu was charged with one felony county of criminal damage to property, nine counts of misdemeanor criminal defacement of property and one count of misdemeanor criminal damage to property. Hu allegedly donned white gloves while toting a brown paper bag while skulking through the South Side neighborhood during the early morning hours. Cops said he targeted parked cars and at least one storefront. Hu was released on his own recognizance and placed on electronic home monitoring. (https://bit.ly/33WEKkg)
FAKE NEWS.... OR FLORIDA?!
I read a headline and Heidi (and you) need to guess if the story is FAKE NEWS or something that really happened in the state of FLORIDA.

A Bradenton man was arrested for assault after hitting a mechanic with a golf club because he was fixing his car too slowly ….. FLORIDA (https://bit.ly/35crbOT)