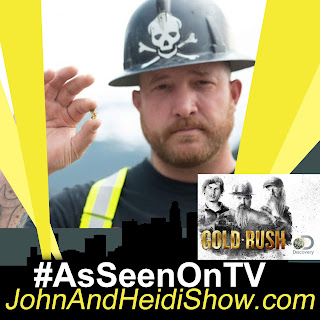 The Associated Press conducted a study of a study that came out two weeks ago and claimed people could eat red meat without exposing themselves to health risks. The study, I kid you not, said the first study’s results were inconclusive, but they couldn’t conclude why. (https://bit.ly/33wKzVj)

A man in Clearwater, Florida is facing aggravated assault charges after he pulled a machete on a woman who refused to date him. Clearwater Police arrested 55-year-old Leonard Thomas just before 7:00 p.m. on Friday night. Police say Thomas and the victim were arguing when he became angry because she wouldn't date him. Thomas pulled the machete from a sheath on his belt and raised it toward the victim and said “I'll cut you up.” The victim ran away and called police. After his arrest, Thomas refused to cooperate and yelled obscenities at the responding officers. According to the report, Thomas was “heavily intoxicated” at the time. He was arrested on a $5,000 bond and remains behind bars. (https://bit.ly/2VfPIhA)

“Joker” was tops at the box office for a second straight week, bringing in $58 million. “The Addams Family” came in second with $31 million.
(https://bit.ly/35rBuPb)

Joaquin Phoenix lost 52 pounds to play Joker in the upcoming film after director Todd Phillips said he wanted his character to look “wolf-like and malnourished and hungry.” Phillips said Phoenix wasn’t given a number — “He just started losing weight. When we finally looked at what he lost, it was 52 pounds. He goes hard.”

Nick Jonas has signed on to replace Adam Levine on “The Voice.”
(https://bit.ly/2pShy7M)

SCOOP OF THE DAY: Brought to you by SingleStudentLoan.com
Kanye West and Kim Kardashian brought the rapper’s Sunday Service to Howard University where he preached his version of the Gospel and rapped several of his hits.The Service was actually held at 8:00 am on Saturday Morning and attendance was high. (https://cnn.it/319yDXN)

A report in the New York Post claims, and I quote, “Rupaul Snatches up a $14 million Beverly Hills Mansion.”(https://pge.sx/2IJsIlN)

Ronan Farrow’s new book claims that Matt Lauer raped a staffer in his hotel room at the Sochi Olympics. (https://bit.ly/30X1bnl)

In Germany, the world’s largest model railroad has broken its own record by expanding to 51,000 feet.


A new survey shows 64 percent of adults are scared of bugs. Interestingly, men were more likely than women to be “very scared” of bugs — 32 percent vs. 22 percent.


A man in England said he couldn’t get an appointment with any dentists in his area, so he drank a half-bottle of vodka and then used a pair of rusty pliers to extract three of his own teeth.

FUN FACT FOR YOU:
Share this with your friends... they'll think you're really smart!
The top six foods that make your fart are beans, corn, bell peppers, cauliflower, cabbage and milk. It’s probably best if you avoid eating any of these if you’re going on a date! You’ll probably like to know some fun facts about these foods that make you poo.


NEWS HEADLINES.... FROM SOMEWHERE IN THIS WORLD!
Dateline.... Costa RicaPeter Weber had emergency surgery Wednesday while filming “The Bachelor” in Costa Rica. (https://pge.sx/2Vuthp6)


WEIRD NEWS: Brought to you by WeirdGiftOfTheDay.com
According to a robbery complaint, a Tennessee man forcibly removed $10 from his own grandmother’s undergarments after she refused his demand for cash. 19-year-old Memphis resident Jared Otte entered the 63-year-old victim’s home in late-August and “demanded she give him cash.” Otte’s grandmother told police that when she declined to hand over any money, Otte pushed her onto on the bed and “held her down, raised her dress, and removed $10 from her undergarments.” The woman reportedly “suffered bruising on her arms and leg during this incident.” The complaint does not indicate why Otte needed the cash. Otte was arrested last Tuesday on a felony robbery charge and booked into the Shelby County jail. He was released from custody after posting $10,000 bond. He is next due in court on October 15th. (https://bit.ly/2OIy0SJ)

According to an arrest report, an Oklahoma woman was busted for allegedly stealing an entire building and trying to hawk it online. 36-year-old Vicki Treaster is accused of swiping a metal garage near Oklahoma City then posting an ad on Facebook Marketplace trying to offload it for $1,500. The owner of the structure told cops he was browsing the Craigslist-style local ad space, when he spotted a photo of his own building for sale. The ad featured two people disassembling the garage, which he said was actually worth $6,000. When questioned by cops, Treaster allegedly first lied about where she got the structure, and later claimed a friend gave it to her. But the “friend” — who turned out to be the victim’s brother — said he didn’t give her permission to take it. Treaster was charged with one count of grand larceny and one count of unlawfully using a computer network to make money. The report didn’t note when the structure was stolen, nor how big it was. (https://bit.ly/35owsTC)
FAKE NEWS.... OR FLORIDA?!
I read a headline and Heidi (and you) need to guess if the story is FAKE NEWS or something that really happened in the state of FLORIDA.
A Port St. Lucie man was arrested for giving his girlfriend a “violent wet willy” ….. FLORIDA (https://bit.ly/2oq8W4l)