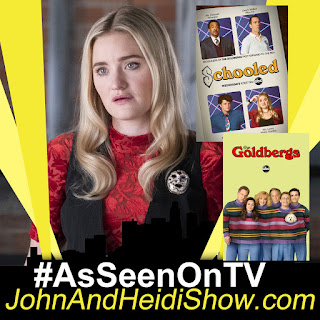 Wednesday we visit with AJ Michalka (Lainey on the Goldbergs) about her new sitcom “Schooled” which airs on ABC Wednesday nights at 8:30/7:30CThttps://abc.go.com/shows/schooled/cast/aj-michalka

In addition to the TV career, she is in a band with her sister!Aly & AJ - Star Maps
https://www.youtube.com/watch?time_continue=76&v=OLQWflMrVTk

A Nielsen Study named Fox News as the most watched news network in all of cable for September. ESPN was the number one sports channel.(https://bit.ly/2n55Y7P)

A man caught driving with more than a thousand marijuana plants in his vehicle told police they were “peppermint.” Spanish police arrested the unnamed 34-year old on Sunday in the Arganzuela district of the capital Madrid after pulling the man over for a traffic offense. During an inspection of the van, police officers seized €600 (around $660) in cash while also finding a contract for the purchase of a boat and a navigation license. Police say they stopped the van during a routine patrol of the area when they spotted the driver performing an “irregular maneuver.” The police then asked about these packages and the driver became visibly nervous, responding that they were simply plastic boxes. However, when officers opened the boxes they found numerous marijuana plants. They also discovered many more in the trunk of the van. After being found out, the man then claimed to the officers that the plants were actually “peppermint.” Officers arrested the man at the scene for an alleged crime against public health. All drug-related crimes in Spain are designated as such, including growth, preparation, trafficking, promotion or illegal possession of narcotics. (https://bit.ly/2mZgJIO)

Film Critics are saying that Adam Sandler’s new movie, “Uncut Gems,” could make him the Favorite to win Best Actor at the Oscars.(https://bit.ly/2lVT6RB)

Producers of “The Joker” disinvited the press from the Red Carpet Premiere because of questions about the film inspiring violence. (https://bit.ly/2mfq5R1)

“The Fast And The Furious” director Rob Cohen has been accused of sexual assault during a meeting in 2015. (https://pge.sx/2mPf5Kg)

Abominable opened in the top spot at the weekend box office with just over $20 million in ticket sales.

SCOOP OF THE DAY: Brought to you by BetterCreditCards.net
A video of a small plane crashing during takeoff in Reno, Nevada has gone viral. Flight officials say it was caused by a “wind related incident,” but they didn’t say what constitutes a “wind related incident.” Luckily, there were no injuries when the plane tipped over. (https://bit.ly/2nBWqBK)

A video of an inmate at an Ohio prison catching drugs that were dropped to him from a drone has gone viral. (https://bit.ly/2lL3gEq)


Miley Cyrus has invested in a “Cannabis Cafe” that will open its doors in Hollywood this year. (https://bit.ly/2mR77QH)

Eddie Murphy told the New York Times that he cringes at his old stand-up material because of how insensitive it was. (https://pge.sx/2of6Uam)

Police suspect a Delta Air Lines baggage handler at New York’s JFK Airport of stealing $300,000, but they haven’t been able to find the money.

Why put pickles on your sandwich when the pickles can BE the sandwich? Elsie’s, in Haddon Township, New Jersey, is replacing the bread on a sandwich with thick pickles. They take a good-size pickle, carve out the middle and stuff if full of the usual sandwich fixings: turkey, cheese, etc. https://www.facebook.com/HomeOfThePickleSandwich/?goal=0_c01849cdd6-b05992d568-264008501

A frustrated Texas (Plano) grandmother used pepper spray to end an altercation between her daughter and the woman’s boyfriend, and they all ended up in the hospital when the spray spread through her car.

FUN FACT FOR YOU:
Share this with your friends... they'll think you're really smart!
The inventor of the Frisbee was cremated and made into a Frisbee after he died. Walter Frederick Morrison invented the Frisbee in 1948, which was originally called the Pluto Platter. In 2010, at age 90 he died and his family cremated him and turned his ashes in to the Frisbee.

The Russian Space Program has discovered a human drill hole in the International Space Station, but is not saying how it got there.
(https://bit.ly/2nD29Hq)


WEIRD NEWS: Brought to you by WeirdGiftOfTheDay.com
Metro Police in Nashville have charged a woman with public indecency after she was found walking along Charlotte Pike completely nude last month. According to Metro Police arrest records, 35-year-old Princess Denise Day was seen by officers walking on the sidewalk completely nude exposing her breasts, buttocks, and genital area. When officers approached Day, she put on a large t-shirt she was carrying. Officers asked Day why she was walking around completely nude and she replied “because it's hot.” She said she was going to a friend's house but that she was now going to turn around and go home because of the heat. Investigators say Day did not appear to be under the influence at the time of her arrest and had no outstanding warrants. She is scheduled to appear in court in October. (https://bit.ly/2nvqM95)

In Canada, Kamloops RCMP's crime reduction unit arrested eight people over four days for stealing bikes they had put out as bait to catch thieves. However, there was one arrest that stood out to them in particular — a 41-year-old groom allegedly caught stealing a bike while on his way to his wedding reception. Corporal Jodi Shelkie with the Kamloops RCMP said, “He was wearing a suit and they asked him why was he dressed so nicely when he was stealing a bike. He had just left from his wedding and was on his way to his wedding reception when he saw the bike and decided to cut the cable and put it in the back of his pickup truck.” Police said the groom was arrested while driving with a prohibited license. When he failed to show up for the reception, the bride called the groom. Shelkie said, “She did contact the groom through his cell phone inquiring where he was, and the officers answered and advised her that he was in the Kamloops RCMP jail cells and likely would not be making it to the reception.”
(https://bit.ly/2oBlbP0)
THESE THREE THINGS!
What do these 3 things have in common:
TOM CRUISE--MICHAEL JORDAN--ALPHA CENTURI?... (Stars)