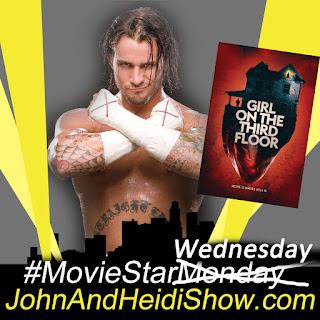 Today we talk with CM PUNK about his new film GIRL ON THE THIRD FLOOR
in theaters and on demand now! Bursting pipes, rotting walls, and unidentifiable slime were not what Don Koch (WWE legend Phil "CM Punk" Brooks) expected when he convinced his wife, Liz (Trieste Kelly Dunn), that he could rehab their new Victorian home himself. In over his head, under duress, and tempted by his old weaknesses, Don soon discovers that the house has its own dark, sordid history and won't be so easy to renovate after all.

A British study revealed that one in six people believe the entire galaxy is called “Earth” and didn’t know what the Milky Way was. (https://bit.ly/31U48We)


Police in Tennessee arrested a 40-year-old man named Tupac A. Shakur after they say he pulled a knife on them and was found with methamphetamine. Officers with the Johnson City Police Department, about twenty-five minutes from Bristol, received calls Friday about Shakur who had active warrants for his arrest from another department. When officers arrived at the scene, they saw a car with Shakur inside. Officers attempted to arrest Shakur, but he pulled away and reached for his waistband. Shakur then turned toward officers with a knife before officers took him down. Officers found a syringe and baggies of meth on him. Shakur was charged with aggravated assault, simple meth possession, and having unlawful drug paraphernalia. He is being held at the Washington County Detention Center on a $18,000 bond. He is set to be arraigned Monday.
(https://cnn.it/2pAs7fQ)

Rachel Maddow slammed her bosses at NBC over their handling of the Matt Lauer sex scandal, saying the whole thing is “tough to stomach.”
(https://bit.ly/2MUx5gF)

Meghan Markle thanked an interviewer who asked how she was doing during an ABC Documentary, claiming that no one ever asks about her.
(https://fxn.ws/2pgKEOc)

SCOOP OF THE DAY: Brought to you by SingleStudentLoan.com
A Southwest Airlines flight attendant claims she caught two pilots watching a livestream of people using the toilets on a plane. Southwest is denying the pilots watched people go to the bathroom. (https://bit.ly/31SX4Jk)

The State of Florida is hiring thousands of python hunters who can help officials deal with an excess of snakes in the Sunshine State. They’re making a movie about all the snakes in Florida. (https://bit.ly/31KmY24)


NEWS HEADLINES.... FROM SOMEWHERE IN THIS WORLD!
Dateline.... Japan
Japan’s famous hotel that’s run exclusively by robots has admitted that hackers have been able to spy on guests in their rooms. (https://bit.ly/2BS3xKl)
WEIRD NEWS: Brought to you by WeirdGiftOfTheDay.com


A man attempting to break into a financial building earlier this month was thwarted by his own gluttonous appetite. The unnamed 44-year-old man snuck into a downtown Seattle office building just before 7:00 p.m. on October 3rd. He reportedly took the elevator up to a financial services office, and shook the doors open. An employee in the office at the time saw the man and hid. The suspect then went into an office, moved a painting on the wall, and discovered his Kryptonite — a glistening glass bowl filled with gourmet chocolates. The hidden employee saw the man make his way over to the bowl and scarf down the treats. He ate an estimated $200 worth of luxury chocolates. And then, in the midst of an apparent sugar coma, he took a nap. By the time security arrived on the scene, the man had reportedly stripped off his shoes, jacket, and watch and was sprawled out on an office couch. The man was arrested on suspicion of burglary, malicious mischief, and two other warrants. (https://bit.ly/31S3TLn)


Police say that a man who attempted to spin his brand-new tires lost control and crashed into a Michigan gas station before fleeing the scene last Thursday. Video shows 24-year-old William Edmonds accelerating in the parking lot of an Ortonville BP gas station around 2:30 a.m. before his truck hits the gas pump island and crashes into the convenience store attached to the station. He told police he wanted to spin his wheels around 180 degrees. Glass, plastic shelving, wine bottles, and countless food items litter the ground of the station following his out of control test drive. The dazed man, whose truck stopped in the middle of the store, can then be seen attempting to detach his license plate and falling down on the debris-littered floor as he rips it from his truck. He then pulls up his sagging pants and walks out of the store, past the skid marks of his pickup truck that left an outline on the floor. Edmonds told police he had been drinking beer and didn't mean to hit the building or injure anyone. He added that he ripped off his license plate after getting scared following the crash.
(https://fxn.ws/2MRYWhk)
FAKE NEWS.... OR FLORIDA?!
I read a headline and Heidi (and you) need to guess if the story is FAKE NEWS or something that really happened in the state of FLORIDA.
A Safety Harbor man was arrested for burglary after breaking into a home, cooking breakfast, and telling the homeowner to “go back to sleep” ….. FLORIDA (https://bit.ly/2oVdAuQ)