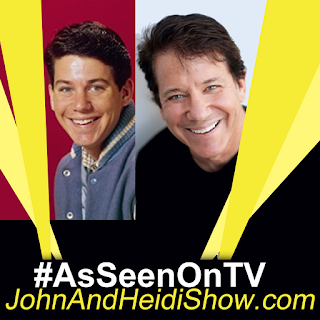 Today we visit with Anson Williams, best known as POTSIE from Happy Days. He has also been in many other movies and TV shows. He had a near death experience when he drove off the road due to drowsy driving. He is now a huge advocate for safer driving. He created a product called Alert Drops to help keep people awake while driving (or doing anything else... like studying) www.AlertDrops.com

A study by Britain’s National Health Service found that a growing number of 90-year-olds are being hospitalized for using cocaine. (https://bit.ly/2rwf4No)


Authorities accuse an Arizona man of hiding methamphetamine inside a stuffed animal and cereal boxes as he shipped packages of the drug to Massachusetts. Federal investigators said they discovered 27-year-old Brandon Greenberg of Phoenix had mailed more than twenty packages to addresses in Somerville and Boston. Authorities said that the packages contained methamphetamine. Greenberg, who was indicted on federal charges of conspiring to distribute methamphetamine and distribution of methamphetamine, will appear in a Boston federal court Tuesday. Investigators said that one of the packages they checked contained two Ziploc-style bags, one wrapped in a small blanket and the other secreted inside a stuffed bunny rabbit. The bags contained just under 940 grams of methamphetamine. Authorities added, “Later in the investigation, agents conducted a controlled purchase of methamphetamine from Greenberg and seized 486 grams hidden inside three cereal boxes that were then placed in a package mailed by Greenberg.” (https://bit.ly/36YKOuX)

Clint Eastwood refused to evacuate Warner Brother’s Studios after a fire broke out in Burbank over the weekend. (https://bit.ly/2O0fHq2)


Disney’s new streaming service was hit by technical difficulties on its first day of service. Service was only down for about twenty minutes. (https://bit.ly/36Ygd0q)
SCOOP OF THE DAY: Brought to you by SingleStudentLoan.com
The U.S. Army kicked off a new recruiting campaign on Veterans Day that focused on cyber warriors. (https://abcn.ws/33HqiwE)

Amazon’s Alexa may soon have eyes that allow it to survey your needs around the house.(https://bit.ly/2NBOmv7)

The Daily Star is reporting that a cigar-shaped UFO has been seen over Kansas. (https://bit.ly/2X2ZunW)

A NASA astronaut told the Daily Star we need a shield around the world or an asteroid is going to hit it and kills us all. (https://bit.ly/2X3vAzT)

Scientists at MIT have developed robotic dogs that can play soccer.
(https://cnn.it/2qFPB3A)

Google has secretly been gathering the private health information of twenty-one million Americans as part of a joint study with Ascension Health Care Providers.
(https://on.wsj.com/2pgUBvg)

A study by Ohio State University found that happiness is the most popular facial expression. (https://bit.ly/32JCnQy)

Miley Cyrus is planning to spend several weeks in silence after getting vocal cord surgery. (https://pge.sx/32ueWe0)

FUN FACT FOR YOU:
Share this with your friends... they'll think you're really smart!
J.K. Rowling chose the unusual name 'Hermione' so young girls wouldn't be teased for being nerdy. The name Hermione came from Shakespeare’s “A Winter’s Tale.” Rowling says when she chose the name, she “didn’t want a lot of fairly hard-working little girls to be teased if ever the book was published.”


NEWS HEADLINES.... FROM SOMEWHERE IN THIS WORLD!
Dateline.... Malaysia
A video of two Monkeys who are living in a house in Malaysia, sharing a bed, and going to restaurants just like a married couple has gone viral .
(https://bit.ly/36RUpn1)

Kay Wilson packed up her life in a hurry and moved to Los Angeles... only to find that what she paid in Pennsylvania for a nice studio apartment would only get her a 2.9-square-meter box in California. Her new home is a capsule, inspired by the famous hotels in Japan. Wilson arrived a month ago at UP(st)ART, a community for young people with artistic aspirations in need of an affordable place to live. Each room contains up to six capsules, which Wilson describes as “cozy.” They contain a single bed, a bar for hanging clothes, a few compartments for storing shoes and other items, and an air vent. By most standards, the accommodation is still not cheap -- $750 per month plus taxes. That works out at around $800, which is slightly more than the 26-year-old was paying in Bethlehem, around seventy miles outside Philadelphia. (https://yhoo.it/2QbgOWt)

Two North Carolina fast-food workers were fired after one of them refused to take a cop’s food order last week. A cashier and a manager at a Cook Out restaurant in Roxboro were canned after the cashier allegedly wouldn’t take an order from Kenneth Horton — an army veteran and Roxboro police sergeant. “We’re saddened that an employee denied service to a police officer,” Roxboro Police Chief David Hess told the outlet. “We promote unity. Unfortunately, it’s all because of a small action that could have been avoided.” The manager on duty told the network she was fired for not being more attentive to Horton once her colleague refused him service. She didn’t reveal why the cashier refused to serve Horton — just that she was in the back of the restaurant when the cashier asked another worker to take the officer’s order. (https://bit.ly/2qMTuDI)

A Davie mom robbed a pet store and told police a hamster told her to do it ….. FAKE NEWS