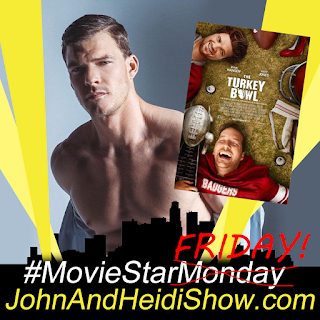 Today we visit with Alan Ritchson about his new movie TURKEY BOWL, a film about a 30-something urbanite is pulled back to his rural hometown by his high school buddies on Thanksgiving to finish the Turkey Bowl – an epic football game against their cross town rivals that was snowed out fifteen years prior. So.... it’s a Thanksgiving Football Movie

According to a new study, most people are too disgusted by recycled waste water to drink it.(https://bit.ly/37lkifd)

The three Indiana judges who were involved in a brawl in Indianapolis that left two of them shot have been temporarily suspended by the Indiana Supreme Court. The state Supreme Court handed down the order Tuesday, writing in its ruling that the actions of Clark County Judges Andrew Adams and Bradley Jacobs and Crawford County Judge Sabrina Bell “were not merely embarrassing on a personal level … they discredited the entire Indiana judiciary.” The order states that all three judges were intoxicated and “behaving in an injudicious manner” during the May 1st incident in a White Castle parking lot. Jacobs and Adams were shot following a scuffle with strangers in the lot — about a half-mile from the state Capitol — after a night of bar-hopping. Adams and two other men were charged in connection with the fight. Under the order of the Indiana Supreme Court, Adams will serve a 60-day unpaid suspension ending Jan. 12th, and Jacobs and Bell will serve 30-day unpaid suspensions ending Dec. 22nd.(https://bit.ly/2qTZbjg)

The Academy of Motion Pictures has selected multiple producers for the upcoming Oscars. (https://bit.ly/2qrqiCs)


Kylie Jenner is now the richest member of the Kardashian family after her $600 million dollar cosmetics deal put her into the billionaire class.
(https://pge.sx/2D1Xcw4)

O.J. Simpson says Colin Kaepernick's friends are hurting the quarterback's chances of returning to the NFL – and Colin needs to shut them up. A lot of people don’t realize that OJ and Colin are good friends. (https://bit.ly/2XvW25r)

SCOOP OF THE DAY: Brought to you by SingleStudentLoan.com
The FBI is investigating whether a “criminal enterprise” was involved in Jeffrey Epstein’s Death. (https://fxn.ws/2rd3Kp2)

A reporter who was chugging her coffee in the background of the impeachment hearings has become a viral meme online. (https://bit.ly/2D0gMJd)
Pabst Blue Ribbon is now selling “99-Packs” of beer in fifteen states.
(https://bit.ly/2rcjo3Y)

The American Medical Association is calling for a ban on all vaping and e-cigarette devices. (https://bit.ly/2CZ7s8w)

A video of a male deer running into a restaurant in North Carolina has gone viral. The staff totally freaked out. (https://bit.ly/2Xz1qVO)

The 380-pound Florida man who was arrested after hiding a bag of meth in his BELLY BUTTON earlier this week has pleaded not guilty.(https://bit.ly/2QCoXDv)
The judge sentenced him to $9,000 bail. (https://bit.ly/2KD4Ml7)


FUN FACT FOR YOU:
Share this with your friends... they'll think you're really smart!
Pirates wore earrings because they believed it improved their eyesight. Along with many other reasons! Due to superstitions, they thought it protected them from bad eyesight (or even blindness), seasickness, and drowning.


NEWS HEADLINES.... FROM SOMEWHERE IN THIS WORLD!
Dateline.... Sweden


WEIRD NEWS: Brought to you by WeirdGiftOfTheDay.com
A man with a fetish of stealing women's lingerie was busted with more than 1,000 items stashed at his home while wearing a pair of stolen panties. 41-year-old José Carvalho was arrested at his home in Turmalina, South East Brazil, on Monday after police raided the home with a warrant search for a stolen revolver. During the search, a thousand panties and forty-five bras were found tucked into different nooks and crannies in his bedroom including under his bed, inside the mattress, and in the wardrobe. The suspect was found wearing a pair of knickers from one of his panty raids following a thorough examination. Detectives believe that based on size and shapes of the lingerie found the entire population of the town, some 8,880 women, have fallen victim to Carvalho's obsession. The lieutenant explained they had received multiple complaints from women reporting the theft of their personal belongings. (https://bit.ly/332CDdM)

Authorities say a teenager broke both his legs after leaping from an Oklahoma City airport terminal roof while being chased by officers. An Oklahoma City police statement says the 16-year-old male was exiting a Houston-to-Oklahoma City flight at Will Rogers World Airport when police approached with a felony burglary warrant. Police say he slipped out a side door on the jet bridge, ran across the terminal apron, and climbed to the terminal roof in a bid to avoid capture. As officers continued their pursuit across the roof, police say that the teen jumped to the apron below, breaking both legs. He was taken to an Oklahoma City hospital for treatment. (https://bit.ly/2CXkBPo)

FAKE NEWS.... OR FLORIDA?!
I read a headline and Heidi (and you) need to guess if the story is FAKE NEWS or something that really happened in the state of FLORIDA.
A Bradenton Man was arrested for attacking a mechanic with a golf club because he was fixing his car too slowly - FLORIDA (https://bit.ly/2NCwy1S)