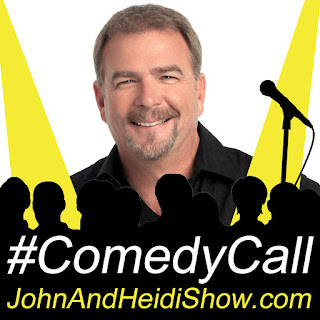 Today we visit with Bill Engvall & Dr. Joe DiTrolio about Frequent Urination and the SOLUTION.... it's called URINOZINC - https://amzn.to/2rAi8rT

A retail survey found that sixty-seven million people are expected to shop in stores on Black Friday. (https://bit.ly/2rqwXx0)

A mother and daughter were caught with sixty-two pounds of pot in their luggage at a Dallas airport. 41-year-old Bridget Deque Wilkins and 22-year-old Victoria Denee Wilkins were taken into custody Thursday at Dallas Love Field after a detective and K-9 smelled marijuana emanating from a checked bag just taken off a Southwest Airlines flight from Los Angeles. Bridget Wilkins told officers that she and her daughter, both of Los Angeles, were visiting Dallas for the weekend. The elder Wilkins consented to a search of four bags in total that had been checked by the pair, leading officers to find twenty-seven bundles of pot in her bags and thirty-six more in her daughter’s luggage. The marijuana in the suitcases was packaged identically — double-bagged and then vacuum-sealed inside larger bags. Police confiscated the pot along with the women’s luggage, clothing, and cellphones. The pair has since been released from the Dallas County Jail after posting $5,000 bond on charges of second-degree felony possession of marijuana. (https://bit.ly/2CGDMNk)


The Producer behind “Survivor” and “The Amazing Race” is suing CBS for wrongful termination. (https://on.wsj.com/34q1v0r)

Maury Povich has made a board game out of his catch phrase, “You Are Not The Father,” and it went on sale exclusively on Amazon on Wednesday. https://amzn.to/35AzMdE

SCOOP OF THE DAY: Brought to you by SingleStudentLoan.com
A company called SpaceBorn United is designing missions where pregnant women can give birth in orbit. The aim is not currently for the whole pregnancy to take place in space, but instead a 24- to 36-hour mission for the labor. The company thinks this can happen in about 12 years.


Big boys don’t cry — except they do. Researchers say men shed a tear at least six times a year. They cry at funerals, when their dogs die and, most commonly, at weddings.


An intoxicated Florida woman told police to arrest her after she admitted to throwing a Christmas coffee mug at her husband’s head. The woman admitted to cops she was drunk and told them, “You know what? Just take me to jail.”


A new survey has found many of you have no idea where your food comes from. In fact, 2 percent of you think bacon comes from a cow.

Guys who gossip outnumber gossip girls two to one, according to research. And 80 percent of guys’ conversations are spent on discussing other people and their habits. The difference between what guys and women gossip about? The study found that while guys love exchanging juicy tidbits of personal info, only about 5 percent of their gossip is malicious.


A Denver businessman says he’s found the unique business which tailors to millennials. Earlier this year, Alex Kurylan opened the Denver Selfie Museum at the beginning of this month, giving paying customers the chance to take as many selfies as they want at unique photo booths. For $25 per person, Kurylan allows customers to walk freely around his more than 30 different photo backdrops, many of which are interactive. Kurylan original owned escape rooms, but said the selfie museum was more unique and promising.

FUN FACT FOR YOU:
Share this with your friends... they'll think you're really smart!
Mike Tyson once offered a zoo attendant 10,000 dollars to let him fight a gorilla. As it is, Tyson bribed a worker to open the zoo for just he and his wife to see the animals. While on this romantic stroll, he tried to also bribe a zookeeper to let him fight a gorilla. The zoo attendant said no.


NEWS HEADLINES.... FROM SOMEWHERE IN THIS WORLD!
Dateline.... Canada

A Canadian man broke into a building and photocopied his face — and then left the selfie behind. Police say 54-year-old Gary Lambe allegedly broke into a commercial property (in Toronto), ate “some food items” and then left — but not before making a photocopy of his face.


WEIRD NEWS: Brought to you by WeirdGiftOfTheDay.com
Emily Peck couldn’t believe what she was seeing outside her northern Michigan home. A woman in Michigan took a video showing earthworms all over the snow, prompting many to ask how they appeared. (Source: WLUC)
“It’s raining worms. It’s snowing worms,” she said in a video she recorded for her husband and then sent to WLUC TV. When the station posted the video on Facebook, it led to a lot of curiosity and confusion over her discovery. Soon, others claimed they saw earthworms as well, while others suggested the worms may have crawled out from under the several inches of snow. Others theorized that they fell from trees. Some joked that it was a sign of the apocalypse. While there wasn’t an immediate explanation for the worms in Michigan, this isn’t the first time this kind of discovery has been reported. Norweigan media reported in 2015 about a biology teacher who found “thousands of earthworms on the surface of the snow” while skiing. He initially thought the worms surfaced from the snow, but he rejected the idea because there was at least 1.5 feet of snow on the ground. The teacher found a report of a similar phenomenon in neighboring Sweden in the 1920s.
https://www.wvlt.tv/content/news/Its-snowing-worms-Were-earthworms-falling-from-the-sky-in-Michigan-565540251.html

Imagine sitting at home, minding your own business when you hear a noise. You go to investigate and find a hole in the floor with an eye staring up at you. Paul Mohlman didn’t have to watch a horror film to witness this exact situation in his home. Molhman said he was sitting on his couch Tuesday morning in North Knoxville when he heard a weird noise coming from his roommate’s bedroom. “It sounded like something fell. Something heavy,” Mohlman said. When he went to check it out, Mohlman found a pipe laying on the floor and a hole in the floorboard next to it. Trying to figure out what happened, Mohlman looked down the hole and, to his surprise, saw a green eye staring right back at him. “It was a Caucasian dude. He wasn’t wearing a shirt; had no shoes on,” Mohlman said. Mohlman said he tried asking the man why he was under there. “What are you doing down there? Did the landlord call you? Are you hear to work on plumbing,” Mohlman asked. Mohlman said the man mumbled something back and then started to move around slowly, as if he was trying to hide. He called police and grabbed his .22-caliber rifle. “I let him know that I have a gun. And I said ‘I don’t want to shoot you, but what are you doing,’ ” Mohlman said. Once police arrived, it took them several minutes to coax the man to come out from under the crawl space. Mohlman said the man claimed to have spilled acid on himself. Finally, a man emerged from the crawl space, but it wasn’t who Mohlman expected. A black man emerged, wearing a shirt but no pants or shoes. “At the moment, I sort of forgot about that part and was like, ‘Oh they got the guy. I saw it wrong. They got the guy,’ ” Mohlman said. Molhman said clothes were sprung around outside near the crawl space door, along with two bottles of muriatic acid, also known as hyrdochloric acid; his watering hose; and insulation. Thinking the horrific ordeal was over, Mohlman left his home to get a drink at a nearby bar. He was telling the bartender about what had just happened and showed him the picture he snapped of police detaining the black man. The bartender reportedly told Mohlman that he saw the same man hanging around the bar the night before, but said there was also a white man with him. The bartender went through surveillance video and found that the two were messing with random items on the outside of the bar. Molhman said the men in the video looked like the men he saw under his house, including the white man he thought he had saw at first. He called police again to say he thinks another man might still be underneath. Molhman said police first saw the surveillance video before heading back to his house. When they checked the crawl space again, it was empty. Mohlman said later that night he discovered that the men cut wires controlling the heat, so he had to call for emergency repairs. Mohlman chose not to file charges believing they needed help, possibly medical attention, but not jail. Knoxville Police said they detained the black man and transported him to UT Medical Center for his erratic and unstable behavior. Police are not looking for the white man Molhman believes was also under his home. Molhman said he learned a valuable lesson: Padlock your crawl space doors. His home is about 100 years old and it was just one of many on his street with crawl space doors that are easily accessible on the side of the house. https://www.wate.com/news/local-news/knoxville-man-discovers-strangers-sneaking-into-crawl-space/

A Palm Beach man was arrested after he was found with two boxes of election votes in the back seat of his car ….. FAKE NEWS