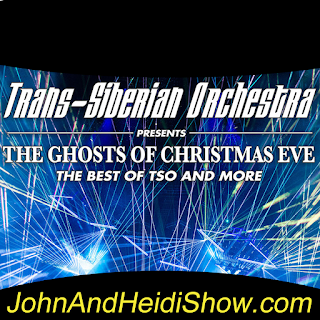 Today we visit with Al Pitrelli with the Trans Siberian Orchestra. Since 1995, they have been a staple when it comes to Christmas music. They put together some of the most beautiful music that will make the season feel a little brighter. https://amzn.to/33AqdKx


A new study warns that brain-boosting supplements could have damaging long term effects on people who use them. (https://bit.ly/2R4pb6X)

Following his arrest for possession of a hypodermic needle containing methamphetamine, a 380-pound Florida Man was hit with additional felony charges after jail personnel discovered a bag of meth “wedged deep within the belly button cavity of the defendant.” Police responding late Friday to a suspicious person call placed by employees of a McDonald’s in Clearwater arrested Martin Skelly when a search of the 41-year-old St. Petersburg resident turned up the loaded needle. Following Skelly’s collar for possession of narcotics and drug paraphernalia, cops asked him if he was in possession of any other contraband, since he could face additional charges if he brought illegal items into the county jail. Skelly denied having “any additional contraband on his person.” However, during intake processing at the jail, Skelly was subjected to a thorough body search that resulted in the discovery of a small plastic bag containing 2.7 grams of meth. A jail deputy reported that the baggie was “wedged deep within the belly button cavity” of the 5’ 8” defendant.
(https://bit.ly/331oaPl)

Producers announced yesterday that the highly anticipated upcoming film “Godzilla vs. Kong” has been pushed back eight months from its March 13, 2020, release date to November 20. The Warner Bros. and Legendary film matches two legendary monsters that have been well-represented on the big screen. Julian Dennison, Brian Tyree Henry, Alexander Skarsgard and Demian Bichir star in the film.

Five days of impeachment hearings boosted cable news networks' ratings over the last two weeks. The Nielsen company said the daytime hearing audience ranged from a high of 13.8 million on opening day to a low of 11 million on the third day. CNN, Fox News Channel and MSNBC showed the hearings in their entirety. Fox averaged 2.5 million viewers over the five days. MSNBC and CNN more than doubled their daytime average.

SCOOP OF THE DAY: Brought to you by SingleStudentLoan.com
LL Cool J has agreed to host the 2019 Kennedy Center Honors in December. CBS announced yesterday that the 51-year-old rapper and actor will lead the honoring of top performers and their lifetime contributions to American culture. The event is set for December 8 at the Kennedy Center Opera House in Washington, D.C. This year's ceremony will honor actress Sally Field, conductor and composer Michael Tilson Thomas, singer Linda Ronstadt, the children's program Sesame Street and the band Earth, Wind & Fire.


A leading cosmetic surgeon revealed that a growing number of women are getting plastic surgery to help correct their, QUOTE, “resting bitch face.”
(https://bit.ly/2lZNG7r)

A study by “Dave’s Killer Bread” found that 62% of Americans ADMIT to eating a second breakfast at least once a week. (https://bit.ly/2lYhv8A)


A female deer was caught on camera dancing in the woods at Yellowstone National Park. (https://bit.ly/2zqQIp4)


A study by the University of Copenhagen found that overweight people are more likely to have overweight dogs. (https://bit.ly/2kGDIIc)

FUN FACT FOR YOU:
Share this with your friends... they'll think you're really smart!
ABBA turned down 1 billion dollars to do a reunion tour. In 2000, ABBA was offered $1 billion dollars to reunite for 100 shows – which would have been $250 million per member. They turned it down because it wasn’t for them.


NEWS HEADLINES.... FROM SOMEWHERE IN THIS WORLD!
Dateline.... EnglandNotorious drug dealer Sam Walker set up a Youtube account inside of a British Prison that has tens of thousands of followers.(https://dailym.ai/2mmeL59)


WEIRD NEWS: Brought to you by WeirdGiftOfTheDay.com
U.S. Customs and Border Protection officers in Philadelphia say they have seized more than 20,000 fake Oral-B toothbrush heads that were bound for an address in Delran, N.J. The products were found inside an air cargo shipment on Oct. 1 and had been flagged “due to poor packaging and questionable quality,” the agency said. “Counterfeit brush heads are manufactured in unsanitary facilities with substandard materials that may sicken users or cause bleeding to a user’s gums or mouth, and structural defects may cause the brush head to detach and potentially choke users,” it added in a statement. CBP says if the products were authentic, the combined retail value would be $95,600. The shipment contained 1,200 10-packs and 2,800 3-packs of the fake toothbrush heads.
https://www.foxnews.com/us/us-customs-officers-seize-fake-toothbrush-heads

Firefighters who responded Wednesday night to a Phoenix home found a 17-year-old girl in the chimney who had gotten stuck as she tried to sneak back into her house after a late night, FOX10 reported. According to another teen, only identified by FOX10 as Yasmeen, her friend became trapped after trying to get into the house and was stuck for about an hour and a half before rescuers arrived. The two girls reportedly came home to find Yasmeen’s house had been completely locked up. With no covert way to enter, the friend decided to climb up on the roof. "She thought about going down the chimney,” she told the station. "I didn't know it was blocked in the bottom. I never thought it was blocked on the bottom, so she went down and she started freaking out." She said the girl, who has not been identified, began to panic. "She was, like, 'call 911!' She couldn't breathe," Yasmeen said. Firefighters took nearly 40 minutes to rescue the teen who, according to FOX10, was covered in soot when she was freed. As for Yasmeen’s parents, the homeowners? They were less than pleased. "They were so mad," Yasmeen said. "Really mad."
https://www.foxnews.com/us/arizona-teen-17-becomes-trapped-in-chimney-after-trying-to-get-in-locked-house-report

A Hollywood Sheriff was charged with indecent exposure after driving pant-less to pick up his wife from a bar ….. FAKE NEWS