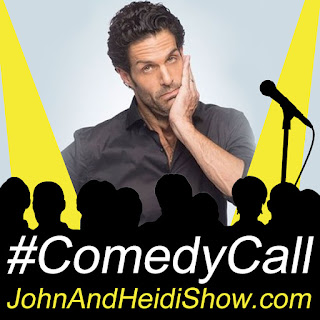 Today we have a #ComedyCall with Pete Correale about his new comedy album PETE'S SAKE. This is Pete Correale's first release with Virtual Comedy Network. He is pure New York, born and raised on Long Island, huge Yankee's fan. Jim Breuer introduced him to a larger market on "Breuer Unleashed" on SiriusXM and now he has co-hosts The Pete and Sebastian Show with fellow comedian Sebastian Maniscalco that airs weekly on SiriusXM and as a separate podcast. In addition, he was a writer and occasional performer on the CBS sitcom Kevin Can Wait.

A study found that narcissists tend to be happier because women are more attracted to psychopaths like them due to their care-free attitude that leaves them devoid of stress. (https://bit.ly/31Z8bkd)

According to court documents, authorities responded to a call of shots fired in the area of 3828 Maloney Road Monday. When officers arrived at the scene, they determined that people were trapped on an island in the Tennessee River, says the document. The report said officers used a boat to reach them. When they got to the island they found John Maxey and Bradford Thacker on the island in possession of a bottle of Captain Morgan Rum. Officers said they believed the men had been trapped on the island after another party left with the boat. The officers reported the men had red, bloodshot eyes and a strong smell of alcohol on their breath. Officer said they were unable to locate a firearm, but they found several shotgun shells in the vicinity. Neighbors reported that shots had been fired in the direction of homes on Maloney Road. The Knox County Rescue Squad transported the men back to a dock at the property on Maloney Road where they were arrested and charged with public intoxication. The report said it was later determined that a juvenile had also been on the island. He reportedly swam to shore and called his family to pick him up.
https://www.wvlt.tv/content/news/KPD-arrests-two-man-trapped-on-island-with-bottle-of-rum-511191351.html

Meryl Streep stars in the dramedy THE LAUNDROMAT as a widow who blows the whistle on a scheme involving tax shelters, shady lawyers and the super-rich. Sharon Stone, Gary Oldman and Antonio Banderas also star. The film ties into The Panama Papers, a trove of 11.5 million documents leaked in 2015 that revealed the network of shell companies used by the ultra-rich to avoid paying taxes. The lawyers portrayed in the film have sued both Netflix and director Stephen Soderbergh, claiming the movie is defamatory.

SCOOP OF THE DAY: Brought to you by SingleStudentLoan.com
A test is currently being conducted in Virginia where drones deliver packages from Walgreens.
The average person takes just 38 seconds to judge your home. The things we notice most when visiting a home is the smell.
Deputies in Florida say a man who stole a chicken wing from another diner was knocked out when another patron threw a pool ball at his head.
They’re faithful, friendly and furry — but under their harmless, fluffy exteriors, dogs and cats, the world’s most popular house pets, use up more energy resources in a year than driving a car. A study out of New Zealand some time ago said keeping a medium-sized dog has the same ecological impact as driving 6,200 miles in an SUV.
What could be more marvelous than Mrs. Maisel herself? Ahead of the third season of The Marvelous Mrs. Maisel, Hasbro teamed up with Amazon Prime to create a board game inspired by the hit TV series. The Game of Life: The Marvelous Mrs. Maisel Edition will have players imagining themselves living in 1950s New York City seeking fame and fortune in the entertainment industry. Similar to the original Game of Life, you’ll explore different paths and experience the unpredictable ups and downs that go along with them.
The game is $28 on Amazon. - https://amzn.to/2oIWyAo

FUN FACT FOR YOU:
Share this with your friends... they'll think you're really smart!
A swarm of 20,000 bees followed a car for two days because their queen was stuck inside. When the car parked, the thousands of bees swarmed onto the car and had to be taken off by beekeepers. The next day, the bees were back on the car because the queen was still inside and the swarm had to be taken off again.


NEWS HEADLINES.... FROM SOMEWHERE IN THIS WORLD!
Dateline.... Russia

Guards in a Russian prison grew increasingly suspicious of a small grey and white cat they had recently seen repeatedly entering and exiting a small hole in a prison fence. When they caught the cat and inspected its collar, they found bags of pot.


WEIRD NEWS: Brought to you by WeirdGiftOfTheDay.com
A woman who has identified as a cat since her teenage years says it has helped her become her 'true self' and brought her closer to her partner. 31-year-old Kat Lyons from Colorado has been into kitten role-play her entire adult life and said she “first realized she was a cat” in high school. The model, who works at Cat Girl Manor - a residence in Colorado Springs which hosts animal role-play at BDSM events, met her 52-year-old partner Robrecht Berg, an aerospace engineer, at a local Comic Con eight months ago. Both say they are in a loving relationship despite the constant judgement they face over being in an age-gap, role-playing relationship. Kat decided to embrace her kitten identity publicly when she came across the Cat Girl Manor and eventually discovered others who saw themselves as felines. Rob, who works as an artist and organizes annual cosplay events, said that he wasn't shocked about Kat's role-play and has been very supportive of his partner's lifestyle choice. In their relationship, Kat mostly takes a submissive role and considers Rob as her “master.”
(https://dailym.ai/2Wwra4E)

A Trumbull County, Ohio man is accused of ruffling more than a few feathers at a high school football game. 35-year-old Erik Szelest is charged with assault after multiple witnesses said he punched Hubbard High School’s eagle mascot in the head last Friday, causing minor injuries to the student wearing the costume. Szelest pleaded not guilty at his arraignment. He is being held in the Trumbull County Jail on $5,000 bond. Police say an officer working at the football game detained Szelest in the parking lot and asked him about the incident. According to police records, the suspect said, “The mascot had something on his beak, I got it off.” Szelest was taken back to the police station. When asked if he wanted to make a statement, police say the suspect told them, “I’m pleading the 5th.” Isaac Powell, the student behind eagle costume, went to the police station with his dad after the game and told officers Szelest had approached him while he was coming out of the stands. Powell told police he made a gesture like he was listening to Szelest and then the suspect put his hands on him and punched him in the head. (https://bit.ly/36olZIb)

A Sarasota woman was arrested for abusing 9-1-1 after she called five times to report that her pizza was late ….. FAKE NEWS