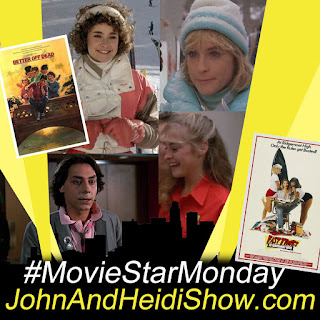 It's a #MovieStarMonday! We talk to THREE of my favorite actors from the 1980s. We met up with Diane Franklin, Amanda Wyss and Robert Romanus at 80s In The Sand in Punta Cana. The FOURTH YEAR is being planned now... we're hoping to go once again. You can get YOUR TICKETS now at www.80sInTheSand.com

A Tech Survey found that the city of San Francisco now has more dogs than children. (https://bit.ly/2JTA8Um)


The flamboyant Texas attorney who bills himself as the “DWI Dude” was found guilty Tuesday of scamming cocaine trafficker clients out of $1.5 million by claiming he could bribe U.S. officials to drop their cases. A jury in a North Texas federal court found 62-year-old Jamie Balagia guilty of conspiracy to commit money laundering, obstruction of justice, conspiracy to commit wire fraud and attempting to violate the Kingpin Act. Balagia, who resides in the Austin area, will be sentenced at a later date and faces up to thirty years in federal prison. The lawyer maintains a San Antonio office and made a name for himself defending accused drunk drivers and people charged with pot possession. Federal officials say Balagia conspired with Florida private investigator Chuck Morgan and Colombian attorney Bibiana Correa Perrea to target the traffickers. Both men pleaded guilty and have already been sentenced.(https://bit.ly/2WGh2WQ)

Caitlyn Jenner has joined the cast of the British Reality Show “I’m A Celebrity …. Get Me Out Of Here.” (https://pge.sx/2NzXJKU)

Robert De Niro says “The Irishman” will be his last mafia drama with Al Pacino. (https://bit.ly/2NelFUQ)

Angelina Jolie poses nude in this month’s Harper’s Bazaar and says she wants to live overseas but Brad Pitt won’t let her until the kids turn eighteen.
(https://dailym.ai/2Cfn2wz)

SCOOP OF THE DAY: Brought to you by SingleStudentLoan.com
A video of a fat cat walking on a treadmill in the state of Washington has gone viral. (https://bit.ly/2CgGFEw)

The U.S. Army is testing a laser ray that can incinerate drones, helicopters, planes, and missiles. (https://bit.ly/34yTF4n)

A San Francisco man was allowed to take a mini-horse onto the Bart Train as his emotional support animal. (https://bit.ly/34B1d6E)

A Florida 9-1-1 Supervisor is facing criminal charges for watching NETFLIX while a call came in about a shooting. (https://cbsloc.al/2pRqL0D)

Georgia Police arrested a man in a clown mask from the movie “IT” after he was seen scaring children. The guy had an outstanding warrant and he was fined $5,000. (https://bit.ly/2qnZ7by)

FUN FACT FOR YOU:
Share this with your friends... they'll think you're really smart!
Nearly 3% of the ice in Antarctic glaciers is penguin urine. Because the temperature in the Antarctic is well below zero, the urine can’t evaporate and just combines with the glaciers.


NEWS HEADLINES.... FROM SOMEWHERE IN THIS WORLD!
Dateline....

Queen Elizabeth’s personal advisor announced that Her Majesty is only going to wear fake fur from now on.(https://pge.sx/2rkujsG)


WEIRD NEWS: Brought to you by WeirdGiftOfTheDay.com
A Missouri man believed to have robbed a laundromat was caught on camera sporting a T-shirt that read, “It's not a crime unless you get caught.” The unidentified man walked into Twin City Coin Laundry in Crystal City, around 35 miles southwest of St. Louis, on October 22nd and apparently stole $600 from a vending machine. He is accused of stealing the money, roughly fifteen pounds worth of change, and of causing $1,300 in damages to the vending machine. The man was captured on security camera, photos of which the laundromat posted to Facebook, where he can be clearly seen sporting the T-shirt with the somewhat ironic slogan. Anyone with information on the man's identity or whereabouts is urged to contact the Crystal City Police Department and reference “Twin City Coin Laundry.” (https://fxn.ws/2PLcD3n)

A verbal dispute nearly turned fatal when a Mt. Pleasant woman ran over her future mother-in-law and drove off. 29-year-old Ashley Rae Anderson was charged with assault with intent to do great bodily harm and failure to stop at the scene of an accident resulting in serious impairment or death. Mt. Pleasant police officers responded to a call of a hit-and-run accident that started as a verbal confrontation between Anderson and the mother of her fiancé. Anderson yelled at the woman, according to the woman's son who was also in the car, and the woman got out. The woman went to the driver's window and began to yell at Anderson, according to witness statements in the police affidavit. Anderson put her car in reverse and accelerated backward quickly, knocking the woman to the ground and running over her. She then drove off to the north and was arrested a short time later without incident. The woman was taken to the McLaren-Central Michigan emergency room, where doctors noted what looked like tire marks across her stomach. According to the police affidavit, the emergency room doctor said that she was lucky to have survived.(https://bit.ly/2PNcGvI)

A Tampa man was arrested for public intoxication and reckless endangerment after riding naked on his horse inside a shopping mall ….. FAKE NEWS