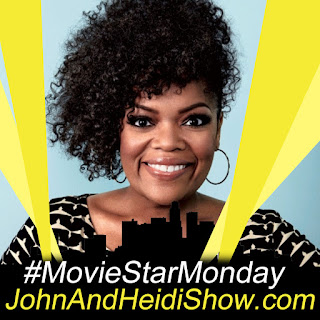 It's another #MovieStarMonday, this time we visit with Yvette Nicole Brown, perhaps best known for her starring role as the opinionated but sweet Shirley Bennett on NBC’s “Community.” She's also starred in many other amazing movies and TV programs. Yvette is now starring (Aunt Sarah) in the new LIVE ACTION version of “Disney's Lady and the Tramp” film, which is available NOW to stream on Disney +! “Lady and the Tramp” is CGI and live-action re-imagining of the 1955 Disney classic.

A Prime research study found that HIV is on the rise in elderly women because they don’t use protection when they have sex. (https://bit.ly/2Q7KS5m)


An Avondale, Arizona dad is facing charges after allegedly driving drunk with his toddler son in the back seat. Police say Joshua Mykel Edwards had about twenty-four open containers of alcohol in his vehicle. Police arrested Edwards Monday night. According to court documents, he was driving about 81 mph even though the posted speed limit is 55. The arresting officer said he saw Edwards’ Jeep Wrangler “follow a semitruck too closely and make rapid lane changes ….” The arresting officer added that 31-year-old Edwards admitted to “drinking a beer earlier that day” and agreed to take a field sobriety test. According to the probable cause for arrest statement, the officer described Edwards’ performance as “poor.” The officer also noted several other signs of intoxication and possible impairment. In addition, he blew a 0.159 and a 0.153 on a preliminary breath test. Edwards is facing charges of extreme aggravated DUI and endangerment.(https://bit.ly/2WUnUjA)

Disney Plus picked up ten million subscribers in its first day.
(https://cnb.cx/33P7trx)

The remake of “Charlie’s Angels” hits theaters this weekend. (https://bit.ly/32MU2XB)

Christie Brinkley’s ex, Peter Cook, has reportedly been lying about the age of his fiancee, Alba Jancou. He’s 60 and she’s 20. (https://pge.sx/2Oe7izh)

SCOOP OF THE DAY: Brought to you by SingleStudentLoan.com
A South Carolina man claims he found three bags of marijuana at the bottom of his McDonalds order. (https://bit.ly/353vcEj)

A Bud Light truck slid off of a Utah highway and dumped two thousand gallons of beer into a church parking lot. (https://bit.ly/2CIHgis)

A Florida man told police who busted him for speeding that he was rushing to get home because he’d been cheating on his wife. (https://bit.ly/2Qh5wQM)

A Russian Airline stripped a man of his frequent flyer miles after he snuck his FAT CAT onto a flight by swapping it with a skinnier cat during his baggage weigh in. (https://bit.ly/2Qeq10b)

The TSA is expecting a record 26.8 million people to fly over Thanksgiving.
(https://bit.ly/2KoXi5b)

The Federal Deficit increased by $134 billion in the month of October.
(https://bit.ly/32KgIrG)

FUN FACT FOR YOU:
Share this with your friends... they'll think you're really smart!
Hewlett-Packard's (also known as HP) name was decided in a coin toss in 1939.
The name was always going to be a hyphenation of the two founders last names, so in order to decide between Hewlett-Packard and Packard-Hewlett, they flipped a coin.


NEWS HEADLINES.... FROM SOMEWHERE IN THIS WORLD!
Dateline.... EnglandBritish Scientists believe that pollution in the water from the antidepressant drug PROZAC is causing fish to be less aggressive when it comes to mating.
(https://bit.ly/33JlneF)

A Transportation Security Administration checkpoint was shut down at Detroit Metro Airport last month for nearly thirty minutes after someone tried to bring an empty grenade, a fixed bladed knife, and a bayonet in their carry-on rucksack. According to a monthly report from the TSA on items confiscated at airports between October 7th and November 3rd, the checkpoint in Detroit was shut down for twenty-four minutes while experts looked at the items. The weapons are not allowed to be brought on a plane according to the TSA carry-on guidelines, which meant explosives experts had to check the grenade to ensure it was not a threat to the people at the airport. It was unclear if the person who tried to bring the items with them is from Michigan. For the time frame of the latest report, TSA says it screened sixty-five million passengers and found 374 firearms in carry-on bags. Of the firearms discovered in bags, 333 of them were loaded and 118 had a round in the chamber. Passengers who bring forbidden items on planes or through security are subject to arrest and fines.
(https://bit.ly/36Wikl9)

A Tennessee Popeyes restaurant worker recorded throwing a woman onto the pavement has been charged with felony aggravated assault. According to news outlets, 29-year-old Deriance Ra'Shaiel Hughes was arrested on Friday. The woman's attorney, Rocky McElhaney, says his 55-year-old client remains hospitalized with a shattered elbow, six broken ribs, and a broken leg. He declined to publicly identify her until authorities do so. Video shows people wearing Popeyes uniforms racing after her as the woman leaves the restaurant in Columbia last week. One person punches her, and then Hughes is seen grabbing her from behind, raising her into the air, and throwing her onto the parking lot. Another uniformed person is seen cheering. McElhaney said his client just wanted a refund after being double-billed for her chicken tenders. The video comes on the heels of a string of violence at different locations across the country since the popular chicken sandwich came out. (https://bit.ly/2rtZ12p)

A Tampa Cop was busted for DUI in his own police car ….. FAKE NEWS