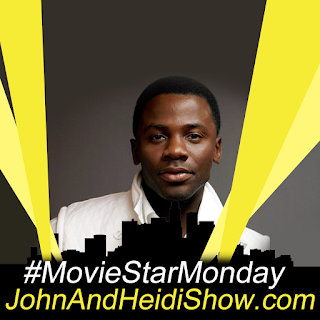 It's another #MovieStarMonday and this time we visit with Derek Luke about his new show The Purge. He is in season two of The Purge on USA Network.https://www.usanetwork.com/thepurge

A 16-year-old boy was arrested early Sunday morning on suspicion of using a remote-control car to transport methamphetamine across the border near the Otay Mesa Port of Entry. Border Patrol agents believe someone on the south side of the U.S.-Mexico border was able to slip the drug-laden car through a gap in the bollard-style fencing and then drive it to the teen waiting on the north side of the fence, said Border Patrol spokesman Theron Francisco. An agent spotted the boy hiding in thick brush near the border, about a mile north of the Otay Mesa Port of Entry, around 12:30 a.m. Sunday. The teen had two large duffel bags and a remote-controlled car with him, and agents found fifty packages of methamphetamine weighing more than fifty-five pounds in his bags. The boy was arrested on drug-smuggling charges and has been booked into Juvenile Hall. Francisco said he didn’t know where the boy lived. The methamphetamine bundles have an estimated street value of more than $106,000.(https://bit.ly/2CXu1dT)

The newest trailer for “Star Wars: Rise Of Skywalker” has been released. The film comes out December 20th. (https://bit.ly/2XChqGA)

SCOOP OF THE DAY: Brought to you by SingleStudentLoan.com
The Secret Service arrested a driver who managed to sneak onto the White House Driveway. (https://cbsn.ws/2XCyig1)

Taco Bell is now selling chicken tenders. They’re on sale for a limited time only.
(https://fxn.ws/35s57iJ)

Police in Hollywood, Florida arrested a man who trashed a convenience store after the clerk refused to sell him beer. (https://bit.ly/2D8rM7i)

A Louisiana man was arrested for methamphetamine use and told the cops the devil planted the drugs on him. (https://bit.ly/2QEVJEg)

A video of two airline passengers fighting over a window shade has gone viral.
(https://fxn.ws/2O9ElFU)

A video of a deer humping a decoy in a field until its head fell off has gone viral.
(https://bit.ly/2XBHEJ8)

FUN FACT FOR YOU:
Share this with your friends... they'll think you're really smart!
The Twitter bird actually has a name – Larry. The name comes from Larry Bird, who is a famous Hall of Fame basketball player. The species of Larry the Bird still remains a secret!


NEWS HEADLINES.... FROM SOMEWHERE IN THIS WORLD!
Dateline.... BangkokPope Francis told an audience in Bangkok that women and children need to be protected from exploitation and abuse. (https://bit.ly/35y0iVd)


WEIRD NEWS: Brought to you by WeirdGiftOfTheDay.com
The Warren City Police Department in Ohio responded to a disturbance call last Sunday evening. The officers said that they were advised that a man was refusing to leave an apartment complex. When officers arrived on scene, they saw a man outside the apartment with his dogs and on the phone. The man told officers that they were no longer needed. The man outside, 29-year-old Chad Cibik, had a swollen left eye that was bruised. Police said they questioned Cibik who explained that his family, including his actual blood brother, 25-year-old Gregory Rarey, stopped by. Cibik also said that Rarey mentioned to everyone how he was going to enter into “America’s Got Talent,” the popular talent TV show. In the report, Cibik said that Rarey’s family stated they would not support Rarey financially to get him to the auditions. This made Rarey irritated and he left the residence. After the parents left, Rarey came back into the residence and began screaming at Cibik for not supporting him. Police say that Rarey began to swing at Cibik’s face, landing a punch on the right side of Cibik’s face, causing his eye to swell. Cibik then took Rarey to the ground, placing him into a chokehold and knocking him unconscious. (https://bit.ly/2KFPxbg)

A woman was arrested on Tuesday after allegedly threatening and chasing her friend with a pocket knife outside of a Wendy’s in Nashville, Tenn. The pair reportedly got into an argument over the amount of food that one of them ordered. Julia Dueease drove her friend to the restaurant expecting the other woman to pay. According to police reports, the other woman became angry at Dueease for ordering too much food at the drive-thru. The pair reportedly pulled into a parking space and continued to argue. At this point, Dueease allegedly pulled out a pocket knife and told her friend to exit the vehicle. As she was getting out of the car, the unnamed woman claimed that she dropped a five-dollar bill. When Dueease picked up the bill, another argument erupted. Dueease allegedly threatened to kill her friend and then chased her around the car with the pocket knife. The unnamed woman eventually made it to a nearby gas station, where she called for help. Dueease was taken into custody on a charge of aggravated assault with a deadly weapon. (https://fxn.ws/347P6hr)

FAKE NEWS.... OR FLORIDA?!
I read a headline and Heidi (and you) need to guess if the story is FAKE NEWS or something that really happened in the state of FLORIDA.
Police in Key West seized a Cookie Monster doll that contained 300 grams of cocaine ….. FLORIDA (https://goo.gl/HzVzWK)