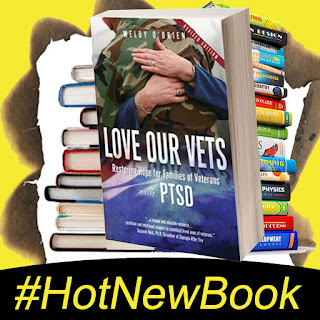 Just in time to honor Veteran’s Day, we visit with speaker/author Welby O’Brien, an expert on the topic of PTSD and Veteran’s issues, and we'll talk about the re-issue of her book LOVE OUR VETS and two other titles that are helping people through tough times. (https://www.welbyo.com) We also invite you to explore further resources at LoveOurVets.org

A You Gov survey found that one in three Millennials see communism as favorable. (https://bit.ly/36eG9Vh)

After telling a fellow bar patron who was wearing a “Make America Great Again” hat to “go back to Russia you effing communist,” a Florida Man spit on the Donald Trump supporter, according to police who arrested the attacker for battery. Investigators say 67-year-old Robert Youngblood and two friends were seated Friday night at the bar in the Hurricane Grill & Wings restaurant in Vero Beach when they were approached by 43-year-old Matthias Ajple. As reported in an arrest affidavit, Ajple told Youngblood, “You should go back to Russia you effing communist.” Ajple then slapped the brim of Youngblood’s red MAGA hat and “spit on Youngblood and then left the scene.” Youngblood, cops say, wrote down the assailant’s license plate number and provided it to police. The tag came back to a car registered in the name of Ajple’s wife. Ajple was booked into the county jail on a battery count. He spent several hours behind bars before posting $500 bond to secure his release early Saturday morning.(https://bit.ly/2BU7ZrI)

Apple released its first TV Show at a cost of $15 million per episode. The scripted drama is called “The Morning Show” and it tells the story of …. wait for it …… a MORNING SHOW. (https://bit.ly/2q3WcnY)

Ben Affleck reportedly went to a 1:00 a.m. poker game in Los Angeles after falling off the wagon and drinking again.(https://bit.ly/2Wns43f)

SCOOP OF THE DAY: Brought to you by SingleStudentLoan.com
LeBron James sent taco trucks to the firefighters and first responders battling the wildfires in California. (https://bit.ly/2JC94Jd)

The Denver Airport has been blanketed in snow all week long and there’s no sign of a slowdown. (https://cbsloc.al/34k4JSS)

In Chicago, an infected toe prevented R&B star R. Kelly from attending a hearing in his child pornography case. (https://bit.ly/2BYLYbn)

Nicki Minaj and Kenneth Petty showed off their over the top wedding rings on Instagram Thursday. (https://pge.sx/2pl0O9C)


FUN FACT FOR YOU:
Share this with your friends... they'll think you're really smart!
The Battle of Hastings didn't take place in Hastings. The famous Battle of Hastings actually took place 7 miles from Hastings in a town that is today known as Battle. Fitting, right?


NEWS HEADLINES.... FROM SOMEWHERE IN THIS WORLD!
Dateline.... England

A British study found that an apocalyptic dust storm wiped out an empire that ruled Mesopotamia for more than two hundred years. (https://bit.ly/36mA0GE)


WEIRD NEWS: Brought to you by WeirdGiftOfTheDay.com
A South Carolina man arrested Saturday in the stabbing a woman allegedly told police he did it because she threatened to feed him to zombies. 29-year-old William Berry, of Aiken, which is in the western part of the state, was charged with attempted murder after he allegedly stabbed the victim in the back multiple times. The suspect and the alleged victim, who was taken to the hospital in unknown condition, were acquaintances. Berry reportedly ran away after the stabbing and was found by police wandering on a highway. When questioned, he allegedly told investigators he “poked someone” because she was trying to feed him to zombies and was being mean to him. According to a police report, alcohol and drugs were not a factor in the incident. And according to The Standard, Berry was booked into the Aiken County Detention Center and has been denied bond. (https://fxn.ws/2Wqsoy9)

Police arrested a California woman over the weekend for allegedly throwing a cup of scalding water at a Starbucks Barista, causing first and second degree burns to his face and neck. According to Modesto police, the woman, Marci Katz, was given a free cup of hot water in a 20 oz Venti cup at the downtown H Street location. Katz reportedly was known to employees for staying in the bathroom for extended periods, so one barista told her to not use it for more than ten minutes. Police say Katz then threw the water at the barista, burning his face and neck. The barista was treated at an area hospital. The incident happened last Tuesday, but Katz was not arrested until Saturday when she returned to the store and an employee who saw the attack called 9-1-1. Katz was arrested on suspicion of mayhem and a probation violation.
(https://cbsloc.al/2NnJE2N)