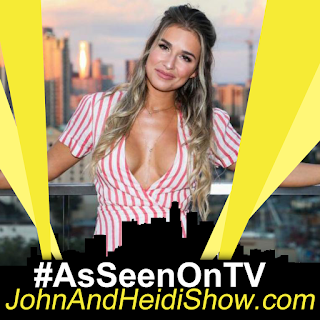 Today we talk to Jessie James Decker. The country artist and reality TV star will reveal the first-ever First POWERBALL Millionaire of 2020 during the live broadcast of Dick Clark's New Year's Rockin' Eve with Ryan Seacrest 2020. The big reveal announcing the winner of the First POWERBALL Millionaire of the Year will air just after midnight on January 1, 2020. abc.com

A new study found that eating chilies will reduce your chances of having a heart attack or a stroke. (https://cnn.it/2rYM9Sx)

An Ohio postal worker was arrested on drug charges for selling crack-cocaine out of her mail truck on her route. 52-year-old Darcy Spangler of Ashtabula was arraigned last Wednesday on drug trafficking charges. The Crime Enforcement Agency of Ashtabula County commander, Detective Greg Leonhard, said Spangler was investigated for three months. Spangler was taken to county jail when she was on her way to work at the Ashtabula post office. No additional drugs were found during a search of Spangler’s residence. But authorities recovered evidence of drug sales, including scales and packaging materials. Additional charges against a second individual are pending. A message seeking comment was left Thursday for her assigned public defender. (https://cbsloc.al/35PiTMH)

Eddie Murphy returned to “Saturday Night Live” for the first time since 1984 and he brought back some of his most iconic characters, including Buckwheat, Mr. Robinson, and Gumby. Eddie made fun of Bill Cosby during the monologue. (https://bit.ly/35NRStd)


The State of Florida hired thousands of python hunters who can help officials deal with an excess of snakes in the Sunshine State.(https://bit.ly/31KmY24)


Bishops at the Vatican are urging Pope Francis to allow Priests who serve in the Amazon to get married. The Church is dealing with a shortage of Priests because it won’t allow them to get married. (https://yhoo.it/3447V4P)


Starbucks is now letting its employees wear facial piercings. A spokesman for Starbucks said, “We believe the Starbucks experience is best delivered when partners can bring their whole selves to work. Based on partner feedback, we have simplified our resources and approach to dress code to provide more clarity and make it easier for partners to select their wardrobe for work.”

Police in Italy were called about a man who was standing in the middle of the busy road directing traffic. But when they arrived the man had left the area and couldn’t be located. Witnesses say the man was directing traffic with a bag of frozen peas.

In Romania an unidentified man snatched a valuable necklace from a jewelry store. He fled the scene on foot and got 40 feet down the sidewalk before he came to a crosswalk. The light was red and our crook politely waited for it to turn green before attempting to cross the street. Unfortunately, this gave the jewelry store owner time to catch up with him, wrestle him to the ground and hold him until police arrived.

Part of a Phoenix road had to be shut down Saturday morning due to a stinky situation. Police say the road was shut down due to what was believed to be a human waste spill. Police said it was “the type of material found in a septic tank or a temporary toilet, such as a port-a-john.” The spill was approximately 75 feet long and 3 inches deep.

NEWS HEADLINES.... FROM SOMEWHERE IN THIS WORLD!
Dateline.... England
A British study revealed that one in six people believe the entire galaxy is called “Earth” and didn’t know what the Milky Way was. (https://bit.ly/31U48We)


WEIRD NEWS: Brought to you by WeirdGiftOfTheDay.com
A wild punk rock show erupted at a Denny’s restaurant in California — and one of the teens behind it got stuck with a bill for trashing the place. The footage shows an adrenaline-fueled mosh-pit explosion — as audience members shout “Punk rock!” and slam into ceiling lamps — at the 24-hour diner in Santa Ana. The hardcore band WACKO and pals rented the dining room for the show on Saturday and ended up leaving behind broken furniture. When cops arrived at 8:00 p.m., the only person left was a 17-year-old boy, who ended up footing the bill for his out-of-control friends. “There was damage done to one of the Denny’s tables,” police spokesman Lt. Anthony Bertagna said last Tuesday. Nobody was arrested. It wasn’t clear how much the teenager had to fork over, but the band later said it plans to throw a fundraiser to pay him back. (https://bit.ly/2rn3a8S)

December 19th, at approximately 9pm... Daniel Collins also known as Buffy of Farragut TN, was arrested at Walgreens in Lenoir City TN when he became upset and hostile after finding out they didn't carry "his brand" of mascara. Before officers arrived Buffy was able to cast a spell on the cashier who says she hasn't been able to quit stuttering since the incident. After being detained, he was found to have stolen a chocolate milk and a pack of beef jerky. Buffy is being held at Loudon County Justice Center while awaiting charges of disorderly conduct and theft under $500.https://www.facebook.com/LCcrimewatch/photos/a.118125749586104/173403890724956/?type=3&theater

A man in Florida was caught when grocery store personnel noticed that he was looking suspicious. He looked suspicious because of the 3 pounds of bacon he had stuffed in his pants. FLORIDA