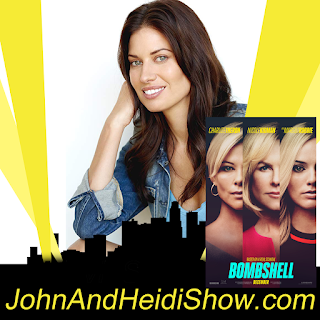 This weekend we visit with actress Bree Condon. She is positioned to be a breakout star in the entertainment industry, appearing in one of this year's top awards-season contenders. Condon is in "Bombshell" opposite Nicole Kidman, Margot Robbie, and Charlize Theron. The ripped-from-headlines drama follows the women who rose up against the late Fox News Chairman Roger Ailes, for sexual misconduct. Condon shines in an uncanny portrayal of news personality and former co-host of FNC's "The Five," Kimberly Guilfoyle, who left the network with reports alleging that she was pushed amid accusations of sexual misconduct. "Bombshell" was released nationwide on December 20, 2019.

A new survey found that Phoenix, Arizona has the fastest rising rents in the country. (https://bit.ly/2PU4F6G)

An argument between two Canadian roommates over the volume of a video game ended with one of the men in hospital with injuries. Police in Guelph were called to a residence last Wednesday at 11:00 p.m. for a reported assault. Officers were told two male roommates got in a physical fight after one was playing his video game too loudly. Police said in a release that “The accused grabbed a glass bong amidst the altercation and hit the victim causing the bong to break and glass to shatter.” A 40-year-old Guelph man has been charged with aggravated assault and assault with a weapon. (https://bit.ly/2EHAMkC)

Warner Bros. announced new release dates for two of their biggest projects: The Flash and The Matrix 4. The Flash will open in 2022. As for the Matrix 4 release date, that’s set for 2021. And to make things extra interesting, the Matrix date is the same as the release date for another Keanu Reeves film: John Wick Chapter 4.


Netflix has a new documentary out about Patriots Tight End Aaron Hernandez, who killed himself in prison in 2017. (https://yhoo.it/2Mie5Ig)

Scottish police are hot on the trail of a serial milk thief near. The perpetrator has snatched up to 300 pints at a time from a school.

David Keller isn’t a beekeeper and he’s never owned any bees. But when the Arizona man wanted to prove a point last month, he registered a beehive as a service animal. Keller said the whole thing started after he saw what appeared to be a service dog misbehaving. He said he could “very easily tell that it was not a service animal because it was pulling the owner to the parking lot.” So, he decided to take a stand. He was thinking that it’s just too easy to get any animals to be service animals. He went to a site called USAServiceDogRegistration.com, and successfully registered the picture of the beehive as a service animal. He simply wanted to bring awareness to the issue that anyone could do it.
A middle school in Manatee County, Florida evacuated its students after someone sprayed too much Axe body spray. According to school officials, the bus carrying Buffalo Creek Middle School students had to remove students off the bus because of the strong odor. The bus stopped at the intersection of 119th Avenue East and Erie Road near Parrish. Another bus arrived at the smelly scene to pick up the students. A local EMS came to check out the students but thankfully, no one was transported to the hospital from having too much Axe body spray. (https://bit.ly/2YJgW1y)

The luck has run out for a Louisiana man allegedly caught rigging bingo games to win more than $10,000. 43-year-old John Cook was booked into the Ouachita Correctional Facility on Friday on a felony theft charge and two counts for failing to appear multiple times following his June 29th arrest. Police say Cook was recorded on video at a bingo parlor manipulating a “Bonanza Bingo” game by handpicking the balls he wanted to play and then hiding the winner until he was ready to end the game. The warrant says Cook did this four times and won thousands for three people, including his sister. One of the winners was captured speaking with Cook before the drawing, and two winners were seen giving Cook money after the game. He’s in jail on an $11,000 bond. (https://bit.ly/2YEQiHt)

FUN FACT FOR YOU:
Share this with your friends... they'll think you're really smart!
George W. Bush was once a cheerleader. Bush was a cheerleader in High School, and continued to be one while he attended Yale. In high school, he was even promoted to head cheerleader!


NEWS HEADLINES.... FROM SOMEWHERE IN THIS WORLD!
Dateline.... Australia
A study by the University of Adelaide in Australia found that driver-less cars will create more congestion on the roads because people will be less likely to carpool. (https://bit.ly/2BM3L5v)

If funeral hall prices are killing you, this Nagano-based (Japan) company wants to help make your final purchase an affordable one. Do-it-yourself projects aren’t just fun, they’re financially rewarding too. When you consider all the things you can do yourself, it seems like you’re practically throwing your money away by paying someone else to build your furniture, repair your car, or hold your funeral, doesn’t it? Tsubasa, a funerary services company based in Nagano Prefecture, has begun taking orders for its new DIY Funeral Set. The set includes a wooden coffin, with a fold-open window to show the face of the deceased, as well as a pillow, mattress, and blanket. The package also provides an urn for ashes and a silver-accented box to hold the bones left over after cremation, as well as three furoshiki wrapping cloths. Finally, there’s a handbook that explains how to perform the ceremony’s rites to put the soul of the departed at ease (https://bit.ly/2Eqiu7p)

A 26-year-old Florida man was cited by police this week after backing a pickup truck into the women's bathroom of an Orange County Chuck E. Cheese. Mariano Gomez Ajtum, of Orlando, was ticketed for improper backing and driving without a valid license after the incident, which occurred just before 12:30 p.m. on Monday. The only vehicle involved in the crash was a 2013 Dodge pickup. In a series of tweets, Orange County Fire Rescue confirmed there were no injuries in the collision. “Only a few patrons in the restaurant at the time. No-one was in the women's restroom where the truck ended up,” it said, posting photos from the scene. A later update contained a 48-second video clip showing the moment the truck reversed at speed directly into the wall. It remains unclear why the driver failed to hit the brakes. The crash resulted in significant damage to the interior and ceiling of the restroom. According to WFTV, Ajtum initially fled the scene but later returned, telling officials that he had left to inform his employer about what had happened. The Chuck E. Cheese was forced to temporarily close its doors after the crash. Atjum was issued with a notice to appear before a judge for driving without a license.
(https://bit.ly/2skzVUl)
FAKE NEWS.... OR FLORIDA?!
I read a headline and Heidi (and you) need to guess if the story is FAKE NEWS or something that really happened in the state of FLORIDA.

A Miami man was caught sleeping in the Manger scene at a local church. He legally had to be evicted with a 30 day notice. FAKE NEWS