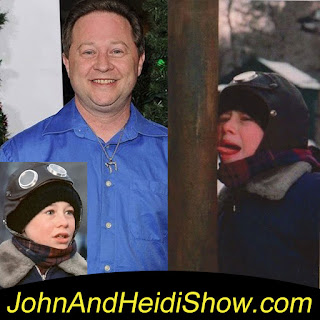 Scott Schwartz is best known for starring as Eric Bates in the movie The Toy in 1982 and as Flick in the movie A Christmas Story in 1983. Schwartz also starred in the films Kidco, Raiders of the Living Dead, Fear, Skin Walker, and Community College. Since 2014 he has starred as Travis Sullivan in the television series The Comeback Kids. Schwartz won a Young Artist Award in 1984 for Best Young Supporting Actor in a Motion Picture for The Toy.

A Florida man said he was so scared after he watched a train hit his vehicle that he pulled two bottles of liquor from the wreckage and drank them at the crash scene. Authorities said the crash happened around 8 p.m. Thursday at Palm Avenue and South Street. The driver, 43-year-old Danny Lee Wyatt, said he was driving home from a liquor store when he missed the turn for his street and got stuck on the tracks as the train was coming. Wyatt tried to flag down the train’s engineer, but when he realized the locomotive wasn’t going to stop, he got out of the vehicle. After the crash, Wyatt reached into his Kia Rio and grabbed a few things, including two liquor bottles, which he said he immediately drank because he was so scared. Police said Wyatt went home after that but then returned later to speak with officers. Records show Wyatt smelled of alcohol but was cooperative, even though he was upset and crying. Wyatt failed a field sobriety test but refused to supply a breath sample for a blood alcohol test. He was arrested on charges of DUI - third offense within ten years and refusal to submit to a DUI test after a license has been suspended.
(https://bit.ly/36OvDDo)

With the release of Star Wars: The Rise of Skywalker, brands are taking advantage of the excitement with all sorts of themed foods and products. The latest addition to the bunch might be the coolest, with Coca-Cola releasing drink labels that have light up lightsabers on them. In an advertisement featuring the labels, Rey and Kylo Ren’s sabers light up blue and red. The illuminating effect comes from a specific type of battery-operated LED. Coca-Cola has wrapped its bottles in a thin flexible OLED panel and electronics, including a battery, allowing images to actually glow.”
Captain Marvel is most mistake-filled film of 2019. The movie finished in first with 59 mistakes, well ahead of Avengers: Endgame and Midsommar, which finished in second and third place with 51 and 45 errors, respectively.

SCOOP OF THE DAY: Brought to you by FunkyMonkeyShirts.com
Over 115 million Americans are expected to travel over this week’s Christmas Holiday. (https://bit.ly/2sdkayz)


A survey by the Center for Disease Control found that 3.7 million Americans have already had the FLU this year. (https://bit.ly/2PPHTOC)

The British Army is using a picture of Kim Kardashian’s butt in a new recruiting campaign. (https://dailym.ai/2ZcFyjN)

Riding a Phoenix, Arizona, light-rail train the day after Thanksgiving, a man abruptly leaped to his feet and wrestled a woman for her wheelchair. The man unlocked the brakes on the wheelchair, then wheeled the struggling woman toward the open train door as she grabbed onto nearby railings. He finally flips the wheelchair, dumping her to the floor, and bolts off the train with it. But video provided by Phoenix police shows other passengers crowd out after him into the station, where they shove him into a wall and retrieve the stolen wheelchair. The wheelchair thief then runs away from the other passengers. Police say the man was “wearing reindeer slippers at the time of the crime.” After release of the video the man was picked up this past Saturday.
A Tesla that a driver said was in auto-pilot hit the back of a police car that was stopped on Interstate 95 in Norwalk, Connecticut, early Saturday morning. Troopers on scene were stopped behind a disabled vehicle with their emergency lights activated. There was an additional flare pattern behind them. The Tesla hit the back of one of the police cars and then continued and hit the disabled vehicle. The driver of the Tesla told state police that he had his vehicle on “auto-pilot” and explained he was checking on his dog in the back seat before the collision. No serious injuries were reported.


NEWS HEADLINES.... FROM SOMEWHERE IN THIS WORLD!
Dateline.... England
A 10-year-old British Girl has a higher IQ than Stephen Hawking or Albert Einstein. (https://bit.ly/2PCxi9m)


WEIRD NEWS: Brought to you by WeirdGiftOfTheDay.com
When Jeanne Souron-Mathers died in November, police in Tooele, Utah, were startled to find the body of her husband Paul in a chest freezer at the couple's home. That wasn't all. Police also discovered a notarized letter from Paul stating that his wife was not responsible for his death, according to a search warrant unsealed this week. Investigators now believe that Paul Mathers died a decade ago and are investigating the possibility that monthly payments to him from Veterans Affairs and Social Security kept coming in after his death. Sgt. Jeremy Hansen of the Tooele Police Department said investigators have filed subpoenas and are still awaiting financial records. The VA payments would total at least $177,000, Hansen said. Paul Mathers is believed to have died between February 4, 2009 and March 8, 2009, Hansen said. He had been diagnosed with a terminal illness and was being treated at a local Veterans Affairs medical center, Hansen said, and was last seen there on February 4, 2009. But before he died, Paul Mathers wrote a letter stating his wife was not responsible for his death, and that letter was notarized in December 2008, the search warrant said. "Detectives tracked down the notary and she said she didn't read it, she just stamped it," Hansen said. Sgt. Hansen declined to disclose Paul Mathers' illness. Jeanne Souron-Mathers, 75, died in November from what appears to be natural causes, Hansen added.
https://www.wrcbtv.com/story/41476395/utah-man-found-dead-in-a-freezer-had-a-notarized-letter-saying-his-wife-wasnt-responsible-for-his-death

A Wisconsin woman who called police on Saturday didn't have an emergency or really need immediate help — she was angry about her chicken sandwich from KFC. Authorities responded to a KFC restaurant in Waukesha around 8:00 p.m. on Saturday after an unidentified woman contacted them, claiming the fast-food eatery's drive-thru employee was “giving her attitude.” The ordeal began when the woman ordered a chicken sandwich, but received an incorrect order. KFC staff offered to make her another sandwich, but she apparently refused to eat it. The woman called police while situated in the drive-thru. Once they arrived, she told them she got a new sandwich but “did not feel comfortable eating it, and wanted her money back.” Officers reportedly told both the woman and restaurant staff this wasn't a police issue. As noted by Patch, police similarly responded to the same KFC location in Wisconsin last month when the restaurant's chicken fryer broke — upsetting a customer who had been waiting over forty minutes for food. (https://fxn.ws/2sFIoRV)

A woman dressed as a turkey was arrested for shoplifting …..
FLORIDA (https://bit.ly/2QBiKcn)