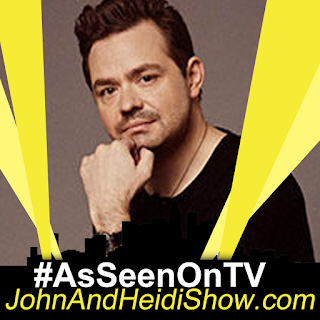 Today we have Will Vought. Season 3 of The Marvelous Mrs. Maisel arrived Dec. 6 on Amazon Prime Video. Catch up on Season 1, 2, and 3 Now!

It's 1958 Manhattan and Miriam "Midge" Maisel has everything she's ever wanted - the perfect husband, kids, and Upper West Side apartment. But when her life suddenly takes a turn and Midge must start over, she discovers a previously unknown talent - one that will take her all the way from the comedy clubs of Greenwich Village to a spot on Johnny Carson's couch.
AVAILABLE NOW..... WATCH THE TRAILER - https://amzn.to/38Kztzu

A new survey found that 4 in 10 adults can’t stop working no matter where they are. (https://bit.ly/2FpRcP9)

A tipsy Florida Motorist whose blood alcohol content was measured at nearly three times the legal limit admitted consuming whiskey shots prior to driving, but assured cops, “I’m a professional drinker.” 54-year-old George Emmanuel was collared late Wednesday evening after a sheriff’s deputy spotted his vehicle speeding in a 35-mph zone. After being pulled over, Emmanuel--who was wobbly and had “watery and glassy” eyes--performed poorly on a series of field sobriety tests. Additionally, his blood alcohol contest was measured at .218 and .211 (.08 is the legal limit). After being read his rights, Emmanuel “admitted to consuming one to two shots of whiskey prior to driving.” The Gulfport resident also reportedly declared, “I’m a professional drinker.” Emmanuel was arrested on a misdemeanor DUI charge. (https://bit.ly/39D3vWl)

“Parasite” was named the best movie of the year by the National Society of Film Critics. (https://bit.ly/2ZXjYAe)


Harvey Weinstein is being mocked in Hollywood for using a walker in court to make himself appear more sympathetic. (https://pge.sx/39HPV3P)

SCOOP OF THE DAY: Brought to you by FunkyMonkeyShirts.com
Twitter critics are accusing Adele of looking too skinny in her recent photos with Harry Styles. (https://pge.sx/2SVsbmJ)


“60 Minutes” shared photos from inside the jail cell where Jeffrey Epstein hung himself. (https://bit.ly/36uPTKI)


Alex Rodriguez shared a note of encouragement to Jennifer Lopez on Instagram following her loss at the Golden Globes. (https://pge.sx/2QK9bF2)

Kleenex tissues were originally used as filters in gas masks. They were originally been developed as crepe paper and used for gas mask filters. The actual Kleenex product we know of today evolved from that by accident.


NEWS HEADLINES.... FROM SOMEWHERE IN THIS WORLD!
Dateline.... Japan

A Japanese sushi magnate spent $1.8 million on a giant piece of tuna. (https://bit.ly/2MX5bA4)

WEIRD NEWS: Brought to you by WeirdGiftOfTheDay.com
Cops in Florida arrived at a home to investigate after receiving reports of a woman screaming - only to find the neighbor had mistaken the noise for a parrot talking. The silly moment happened outside a couple's home in Lake Worth Beach while the husband was fixing his wife's car just before New Year's Eve. Home security footage shows the husband calmly shifting through his tool box as Rambo moans “help” and “let me out!” The unidentified man said, “I was changing the brakes on my wife's car and had my 40-year-old parrot, Rambo, on his outside perch where he sings and talks.” Just two minutes later sheriff's deputies arrive at the couple's home, making the man jump in surprise and quickly turn around to face the trio. The deputies inform the man that a nearby neighbor reported hearing a woman's desperate screams from inside the home. After the deputies left, the man took Rambo to meet the concerned neighbor to explain the incident. “Afterward, I also introduced Rambo to the neighbor who called in the screaming. She too had a good laugh,” he said.(https://dailym.ai/2ty6T43)

Police in Florida said no one was injured when a driver accidentally backed their car up into a hotel swimming pool. The West Palm Beach Police Department shared photos on Facebook showing the car submerged in the swimming pool at the Holiday Inn Express. Police said the driver, an adult, accidentally reversed into the pool from the hotel's parking lot Friday. The driver and a passenger were able to get out of the vehicle safely and were not injured. (https://bit.ly/37Et3As)
FAKE NEWS.... OR FLORIDA?!
I read a headline and Heidi (and you) need to guess if the story is FAKE NEWS or something that really happened in the state of FLORIDA.

A Jacksonville woman was arrested for shooting at the home of a customer who gave a bad review to her hair salon... FAKE NEWS