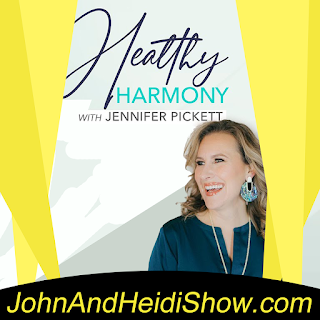 Our guest today is Jennifer Pickett, one of the country’s leading dietitians... she has a Master’s Degree in Human Nutrition from University of Southern Mississippi and will be giving away free tips which she has given to countless clients as a health and wellness expert for the past twenty-three years.
https://www.InspireHealthyHarmony.com

A survey by the University of the Netherlands found that kids eat healthier dinners after watching cooking shows with healthy ingredients. (https://bit.ly/2ZUoQpC)

A Florida woman was arrested and charged with DUI early on New Year’s Day after Florida Highway Patrol troopers say she was caught driving 107-mph down a Pinellas County interstate.  Troopers say they stopped 22-year-old April Moyer, of Holiday, just after 1:30 a.m. on January 1st as she sped north on I-275. An arrest report says she was driving 107-mph in a 65-mph zone at the time. When troopers pulled her over, they say they noticed Moyer showed signs indicating she was under the influence of alcohol. The arrest report says she had poor balance, bloodshot and glassy eyes, and performed poorly on field sobriety tests. The arrest report says troopers found Jell-o shots and beer in Moyer’s trunk, as well as an open container of Tito’s vodka inside the vehicle. Moyer was arrested on a misdemeanor charge of driving under the influence. (https://bit.ly/2txX5qU)

The three highest money winners in the game show’s history (James Holzhauer, Ken Jennings and Brad Rutter) compete in a series of two back-to-back games. The player with the most combined winnings from the two games wins the “match”. Play will continue on successive nights until one of them has won three matches and takes home the $1 million prize.
SCOOP OF THE DAY: Brought to you by FunkyMonkeyShirts.com


Tesla is now the most valuable American car company ever, with a value of $83 billion dollars. (https://on.mktw.net/2Fz8N7n)


A Florida woman was arrested for attacking a McDonald’s Employee who charged her extra for dipping sauce. (https://bit.ly/35yQ4DA)


The Iranian Government is refusing to hand over the black box of a Ukrainian Airliner that crashed near Tehran on Tuesday night. (https://bit.ly/2utxIa1)


Nikki Minaj says she loves her wax figure that’s on display in Berlin, despite the fact that the internet has been trashing it all week. (https://bit.ly/2N7QSJg)

A Coca-Cola truck ran into a Pennsylvania home. https://nypost.com/2020/01/06/coca-cola-truck-crashes-into-pennsylvania-home/

We’re a week into the new year and if you made a resolutions, there’s a 50% chance it’s already been broken. By the end of this month 90% of resolutions will be shot.

In 1998, Sony accidentally sold 700,000 camcorders that had the technology to see through people's clothes. These cameras had special lenses that use infrared light meant to be used as night vision, but it also allowed you to see through some types of clothing.

NEWS HEADLINES.... FROM SOMEWHERE IN THIS WORLD!
Dateline.... Australia
Australian Instagram star Tammy Hembrow is being slammed on Instagram for posting a racy photo during the brush fires. Now to be clear, the post is asking people to donate to help fight the Brush Fires. There’s a picture of her in a pink bikini and wet tank top.(https://bit.ly/2N5Q4UU)

WEIRD NEWS: Brought to you by WeirdGiftOfTheDay.com
A man from Thunder Bay, Ontario is facing charges after allegedly using a harmonica to steal a cell phone from a hotel clerk. City police say they were called to the hotel late night in response to reports of an armed robbery. They say the front desk clerk reported a man had brandished a metal object believed to be a gun before taking his cellphone and fleeing the scene. Police say they tracked the cellphone using GPS coordinates and found a man matching the suspect's description nearby. They say the man told them he had used a harmonica in the alleged holdup, and police say they recovered the musical instrument along with the missing cell phone. The 23-year-old man is facing three charges including robbery with an offensive weapon. (https://bit.ly/2N0iuzO)

According to Florida police, incensed that she would have to pay extra for dipping sauce, a McDonald’s customer threatened to “rob” the restaurant and warned that she would get the condiments “by whatever means necessary.” As detailed in an arrest affidavit, 19-year-old Maguire McLaughlin arrived at a McDonald’s in Vero Beach around 3:45 AM on January 1st. McLaughlin ordered a “large amount of food,” which she paid for at the drive-thru window. At that point, McLaughlin, who lives about five miles from the restaurant, asked for one dipping sauce in each flavor McDonald’s offers. An employee responded by saying that each packet would cost McLaughlin 25 cents, “at which point a verbal altercation ensued.” McLaughlin allegedly “began yelling profanities at several employees stating she would ‘rob’ the establishment if she didn’t get her dipping sauce.” When questioning McLaughlin, police detected alcohol on her breath and noted that the teenager’s “eyes were glossy and speech was slurred.” She was arrested for disorderly conduct and resisting arrest. (https://bit.ly/2FmFCV1)
FAKE NEWS.... OR FLORIDA?!
I read a headline and Heidi (and you) need to guess if the story is FAKE NEWS or something that really happened in the state of FLORIDA.
A Clearwater man told police that three syringes found in his rectum were not his ….. FLORIDA (https://bit.ly/2M71pm4)