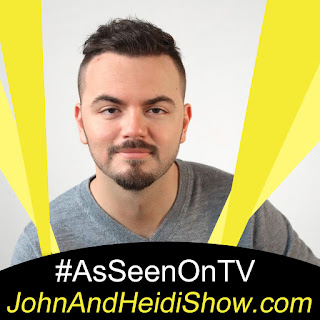 Patrick Lee Harney was born in Lansing, Michigan on October 26th, 1995. He is the son of Tammy and Edward Harney, as well as the youngest of four children. He was raised in Haslett, Michigan by a proud Irish family, surrounded by sports and music. He graduated from the local high school and went on to go to Michigan State University for two years where he studied film production.

Patrick began his acting career in 2008 doing the local middle school's musical. He auditioned as somewhat of a joke because a friend told him too, and he ended up getting a lead role. From that point on, he was in the high school's musicals every year from the 2009-2010 year until the 2013-2014 year as well as participated in the school's Chorale choir and Men's Ensemble. Patrick began studying acting with Taylor Kelsaw in 2015 and while he attended Michigan State University, began doing student films as well as doing a local theatre company's version of the musical Dogfight, where he played the lead role of Eddie Birdlace. He was nominated for a Pulsar Award in the category of "Best Lead Actor in a Musical". In 2016, during his sophomore year in college, he landed the supporting role of Vince in the MSU made feature film called Sorta Late (2016). This was apart of a project called Theatre2Film. The film premiered at the Traverse City Film Festival in 2016. In 2017, Patrick landed some background work in Michael McCallum's short film Eskimo Brothers (2017), and Katheryn Bigelow's Detroit (2017). He also landed a role on the pilot for a sci-fi series called Electron Blade (2017-) playing the role of Sindricus. During this time, Patrick began filming Scapegoat (2018), playing the lead role of Matt, which premieres in September of 2018. Patrick appeared in the music video for "Torn Apart" by metal band Of Virtue in 2018 as well. He has lended his voice for the SiN Studios produced video game Tuebor, as well as a short film called Letters (2018). He will be teaming up again with the director of Scapegoat (2019), Jeff Kapp, to produce and star in Vigilant Entertainment's feature film Storage. It is currently in development at this time. Patrick will also be starring in a police, crime drama, DPD Echo 1, which is set to start filming this summer.

A new study claims that eating nuts is good for your gut health and will prevent heart disease. (https://bit.ly/37nSfeT)

A 65-year-old woman and her 19-year-old granddaughter were arrested at a San Diego border crossing when authorities say they were trying to sneak 200 pounds of methamphetamine into the country. U.S. Customs and Border Protection (CBP) officers say it happened on January 19th, at about 12:40 p.m. The women, both U.S. citizens, were driving a 2006 Dodge Durango. A CBP canine team was roving through vehicle lanes when the canine alerted to the vehicle’s passenger-side door so the car was selected for further inspection. CBP officers later extracted and seized 299 packages of methamphetamine, weighing 219 pounds from the vehicle’s roof, doors, and quarter panels. The narcotics have an estimated street value of more than $416,000. CBP seized the vehicle and drugs. Both women were turned over to Homeland Security Investigation agents. It was unclear if they had lawyers who could speak on their behalf. (https://bit.ly/2RTF1zJ)

SCOOP OF THE DAY: Brought to you by FunkyMonkeyShirts.com
A survey finds 40 percent of people snoop when alone in someone else's bathroom by checking out cabinets and drawers.


Now in its second year, a UC Berkeley basic life skills class has become so popular that it’s had to turn 200 wannabe adults away. The eight-week pass/no pass course teaches young people how to be more responsible and grown-up, ie. how to “adult.” They learn how to budget for food, do taxes, manage relationships, and more. Other areas include fitness, nutrition and mental health.


Fifty US military personnel have now been diagnosed with concussions and traumatic brain injuries following the Iranian missile attack on US forces in Iraq earlier this month. That’s an increase of 16 from late last week when the Pentagon said 34 cases had been diagnosed.


The average parent clocks almost 750 stroller miles a year. The poll of moms and dads finds the typical tot will be strapped into their stroller seat eight times a week for about 62 miles a month.


A man in England was fined for blowing his nose while his van was stopped. The guy wiped his nose with a handkerchief while stuck in traffic. But when the traffic cleared, he was pulled over by police who told him he had not been in control of his vehicle. He was fined $97.

There's a giant fish with a transparent head. The deepest levels of our oceans are some of the least explored areas of the planet. Because of the extreme pressure, cold, and dark at these depths, only the very strangest of creatures can survive there. These include giant tube worms, vampire squids, goblin sharks, and viperfish with teeth so long that they can't close their mouths. Perhaps the strangest, though, is the barreleye, a large fish with a completely transparent head.

An Australian woman died while taking part in a cake-eating competition in the state of Queensland. (https://yhoo.it/37xJwqy)

WEIRD NEWS: Brought to you by WeirdGiftOfTheDay.com
The FBI is asking the public’s help in catching a so-called “bad wig bandit” who’s been robbing banks in North Carolina. The FBI said in a statement on Thursday that the suspect wore a different wig during each heist in the Charlotte area. One wig was blonde. Another was black. The third was red. The FBI said he robbed a BB&T in Huntersville on Dec. 13. He then robbed two banks on Jan. 7. The first was a New Horizon Bank in Belmont. The second was a Wells Fargo in Gastonia. https://www.wate.com/news/national-world/fbi-is-trying-to-catch-a-bad-wig-bandit-in-north-carolina/

Incensed that a Burger King employee would not honor a coupon he offered, an Iowa man first threw a cell phone at the worker and then climbed over the counter and struck the victim in the head with the phone, drawing blood. Cops say that 34-year-old Jeremiah Wenzel was arrested for assault causing bodily injury following a January 15th confrontation at a Burger King in Cedar Rapids. Wenzel is scheduled for an initial court hearing on the misdemeanor charge on February 5th. A Cedar Rapids Police Department spokesperson told TSG that Wenzel “allegedly attempted to use a coupon but the store didn’t honor it. He became upset and threw his phone” at the 43-year-old male employee. Wenzel, who fled after the attack, was subsequently arrested at his family’s Cedar Rapids home, which is three miles from the Burger King. (https://bit.ly/2uhtNNw)
FAKE NEWS.... OR FLORIDA?!
I read a headline and Heidi (and you) need to guess if the story is FAKE NEWS or something that really happened in the state of FLORIDA.

Police in the town of Parrish arrested a man for assaulting his wife with a Taco Bell Burrito ….. FLORIDA (https://bit.ly/2HDwoYk)