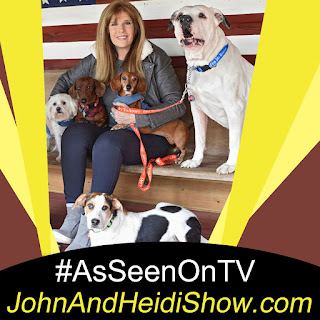 Everyone’s familiar with the annual Puppy Bowl that takes place before the Super Bowl on Animal Planet. Now, returning for its third year, Animal Planet presents the DOG BOWL, a special event for adult and senior dogs living in shelters who are frequently passed over for puppies. Taking place the night before the Super Bowl, the Dog Bowl features 65 older dogs, who will be available for adoption.

The DOG BOWL host is former TODAY Show correspondent and award-winning animal activist Jill Rappaport, who’s been a part of the Puppy Bowl events since 2012. Jill shares some of her most memorable moments in Puppy Bowl history, what makes the Dog Bowl special, and how viewers at home can lend their support.

A study by Penn State University found that American Households waste one-third of their food. (https://bit.ly/2U0gWtZ)

A man from Utah was arrested this week when police found almost $4 million worth of illicit drugs in his car in Arizona. 30-year-old Logan Lewis Pederson was pulled over on Interstate 15 near the Utah border Monday afternoon. KUTV said Pedersen “appeared extremely nervous” during the traffic stop. The station said a St. George Police Department K9 unit assisted and that's when the narcotics were found inside his white sedan. When the vehicle was searched, police found six 1-gallon jugs, weighing a total of 66 pounds, filled with a liquid substance that field tested positive for methamphetamine, six bricks of cocaine which weighed 13.2 pounds, 1,000 packages of candy infused with THC that weighed 206 pounds, and 2.2 pounds of MDMA. Authorities said the street value of the drugs is approximately $3,696,720. KUTV said Pederson was arrested and charged with multiple felonies. The station said he's being held at the Mohave County Adult Detention Facility. (https://cbsn.ws/2tIRtKZ)


A $26 million dollar Los Angeles Mansion comes with a complete replica of the Star Wars Cantina.(https://bit.ly/2GuhJLT)

SCOOP OF THE DAY: Brought to you by FunkyMonkeyShirts.com
Students across the U.S. submitted more than 28,000 potential names for NASA’s Mars 2020 rover. A panel of 4,700 volunteer judges whittled that list down to 155 semifinalists. That list was whittle down to nine. Today is the last day to vote for the Mars 2020 rover name.


A New York City Subway train was evacuated after bed bugs were discovered on board. (https://7ny.tv/36mkMQC)

A Utah woman was arrested for being topless in front of her stepchildren. (https://bit.ly/2Gm3NmI)

The United States Government is evacuating its citizens from Wuhan, China where the Coronavirus continues to spread. There are fifty-six million people quarantined indefinitely in China and experts say this could lead to a rash of new pregnancies. Chinese Health Authorities say that nearly 2,000 people have been infected this week. (https://tmsnrt.rs/2uzeoZ0)


A researcher says it’s OK to new-fallen snow. Anne Nolin, a professor at University of Nevada, Reno says: “Everyone should eat snow because it’s really fun.” Nolin, who studies snow and ice in the climate system, says most snow is just as clean as any drinking water. To make their way from a cloud to the ground, cold water molecules have to cling to particles of dust or pollen to form the ice crystals that then grow into snowflakes in a process called deposition. These, Nolin points out, are the same tiny particles we normally breathe. Plus, as snowflakes fall, they have a harder time picking up soot and other air pollutants than raindrops, which are better at picking up these particulates.

The Philadelphia Flyers Mascot, Gritty, is being investigated for punching a 13-year-old boy. (https://bit.ly/30O4I8X)

There's a decorated war hero dog. While in the trenches of World War I, the U.S. First Infantry Division found themselves unable to communicate with other troops because shellfire had damaged the telephone wires. A young private came up with a unique solution: Rags, a mixed breed terrier whom the soldiers had adopted in Paris, would carry the messages from one division to the next tucked into his collar. He saved many lives, and when Rags passed away—in Maryland, at the very advanced age of 20—he was buried with military honors.


NEWS HEADLINES.... FROM SOMEWHERE IN THIS WORLD!
Dateline.... Thailand


In Thailand, police auctioned off a Honda CRV that had been seized in a drug bust. The buyer spent $19,000) on the vehicle. Later, a mechanic discovered a secret compartment behind the bumper that contained nearly 100,000 amphetamine pills. Officials said they would conduct more thorough searches in future.
WEIRD NEWS: Brought to you by WeirdGiftOfTheDay.com
A family staying at an Airbnb property in California had a safety scare when their young son found a loaded gun. "That was just in a drawer in that room. It wasn't hard to find," said Jon Segarra, the boy's father. "It wasn't hidden. It wasn't stashed under a bed or anything. It was in a drawer right there." The boy found the gun inside a Lake Tahoe rental property managed by TurnKey and posted on Airbnb. They called police, who came and picked up the gun. Airbnb did not respond to a request for comment. TurnKey said this type of situation is unusual, and they take the safety and security of their guests seriously. The sheriff's office says they've launched an internal investigation. Airbnb gave the family a full refund, but the family says neither the company nor law enforcement have contacted them with an update. https://www.wvlt.tv/content/news/Kids-find-gun-deputys-badge-in-Airbnb-rental-in-Calif-566973471.html

Police investigating a burglary at a tobacco shop in Northern California last month had a key piece of evidence that helped them identify a suspect: video of the man falling through the ceiling. The Sonora Police Department wrote on Facebook the incident happened on Dec. 22nd, when officers received a call for a burglary alarm sounding at a business just after 6:00 a.m. Officers arriving at the scene found no signs of forced entry from the exterior of the building but eventually discovered a “man-sized hole” in the ceiling. The suspect and a purported accomplice “actually bored a hole through the ceiling from a vacant building that was above that business and probably spent a couple hours doing it but they broke into the business,” Sonora Police Chief Turu Vanderwiel said. After they examined the hole that led to an empty space upstairs, officials said the investigation revealed that forced entry into the business downstairs, Cigarettes Cheaper, was made through a rear door. Police said they were able to identify the suspect after reviewing the surveillance video and receiving tips from the community. (https://fxn.ws/3aM6qfU)
FAKE NEWS.... OR FLORIDA?!
I read a headline and Heidi (and you) need to guess if the story is FAKE NEWS or something that really happened in the state of FLORIDA.

A Miami Man with no arms was charged with stabbing a Chicago tourist ….. FLORIDA (https://bzfd.it/2FOTz00)