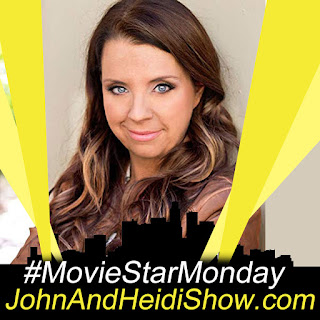 It's another #MovieStarMonday today we visit with Kerri Pomarolli, a Christian Comedian in Hollywood. imdb.com/

In addition to being in movies and on TV (General Hospital), she's also a writer for the Hallmark Channel and she has a few NEW books out right now!Confessions of a Proverbs 32 Woman: How I Went from Messed Up to Blessed Up Without Changing a Single Thing - https://amzn.to/2NC0yff

A survey by Charisma found that most Americans start to feel work anxiety by 4:00 p.m. on Sunday. (https://bit.ly/2TiCIZp)

A survey of 1,182 American adults found that 76% gave Disney’s new streaming service, Disney+, a 4 or 5 out of 5 in terms of satisfaction. That’s compared to 48% for Apple TV+ subscribers. Disney+ also topped Netflix, Amazon Prime Video and Hulu in the survey.

Star Wars: The Rise of Skywalker has joined the billion-dollar club. The film hit the billion mark on Wednesday.

SCOOP OF THE DAY: Brought to you by FunkyMonkeyShirts.com
Do you when the tax deadline is? According to new research, less than a third of Americans know when taxes are due this year. The survey found 27 percent of Americans were able to correctly identify April 15 as the official day taxes are due.

A study finds that people who work extra hours are more likely to drink more.

Are you on a diet? Odds are, this time of year, you are. Maybe you’re not calling it a diet — you’re just eating, well, differently. Either way, a new study reveals the average adult will try 126 different diets during their lifetime. Assuming you begin adulthood at 18, that’s about two diets a year.

The shelf-life of a hobby is just 16 months. Researchers who polled 2,000 adults identified work commitments, busy family life and lack of motivation as the reasons we don’t stick with interests for longer.

The unicorn is the national animal of Scotland. While Scotland proudly boasts the Loch Ness Monster, one of the world's most famous fabled creatures, the country opted to make another mythical beast its national animal: the unicorn. Although this might seem like an odd choice, Visit Scotland explains that unicorns played an integral role in the country's history. Back in the 12th century, William I used the "proud beast" in the Scottish royal coat of arms.

NEWS HEADLINES.... FROM SOMEWHERE IN THIS WORLD!
Dateline.... EnglandA U.K. company has enacted a new company-wide policy that gives non-smoking staff four extra days of time off each year. KCJ Training & Employment Solutions stated in a Facebook post that they were “proud to incentivize” their staff to quit smoking and to “create a healthy workplace” within their offices.

WEIRD NEWS: Brought to you by WeirdGiftOfTheDay.com
An Atlanta couple said they came home from a winter vacation to find their house had been ransacked by an unusual suspect: a squirrel. Kari and Dustin Drees returned to find their house in disarray with floors scratched, baseboards chewed, and squirrel feces all around. Reports say a squirrel had fallen down their chimney and became trapped in the house, defecating and scratching at everything to get out. The couple's home insurance provider won't cover the damages, saying a squirrel is considered a rodent not covered by the policy. But the insurer offered to pay for alternative housing while the couple cleans the home. https://www.wrcbtv.com/story/41530047/squirrel-trashes-home-insurance-wont-fix-it

A Colorado man was arrested and booked in jail after putting women’s underwear on vehicles at Park Meadows mall last Friday. 47-year-old Bonifacio Gallegos was arrested by Lone Tree Police Department officers after they were alerted of the man, who was reportedly following a guest in the parking lot of the shopping center and placing women’s underwear on vehicles. He was arrested and charged with harassment and was later booked into the Douglas County Jail. Additionally, officials said that while this case is under investigation, there is no indication it is related to human trafficking, as social media posts circulating around the community suggest. Officials called on patrons who’ve had encounters with the suspect, who was driving a gray, 2015 Ford Explorer at the time of the incident, to contact their local law enforcement agency immediately. (https://bit.ly/2tR4O3c)
FAKE NEWS.... OR FLORIDA?!
I read a headline and Heidi (and you) need to guess if the story is FAKE NEWS or something that really happened in the state of FLORIDA.
A Palate man was arrested after asking police to test the quality of the meth he had just purchased ….. FLORIDA (https://bit.ly/2DojjOu)