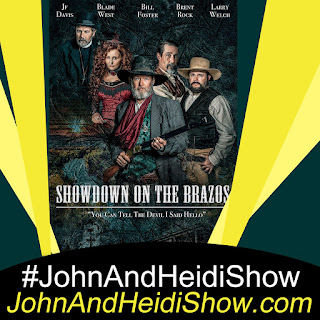 He has a new movie coming out in 2020 Showdown on the Brazos
https://www.youtube.com/watch?v=2A4OGxwoTXI

A survey by ORKIN found that Washington, D.C. is the city with the most bed bugs in America. New York used to top the list. (https://bit.ly/35Ki1bu)
THIS IS YOUR BRAIN ON DRUGS: Brought to you by TimeForRehab.com!
Each day we share stories about people doing dumb things under the influence, but addiction is NO LAUGHING MATTER! If you or someone you know needs help, we're here! Learn more at TimeForRehab.com.

A Belleview man is accused of urinating in bed during a rampage that started when a lady friend asked him to move over. 40-year-old Daymon Edward Jolin was charged with simple domestic battery after the incident. According to the police report, the victim told a Belleview Police officer that she and Jolin had been arguing and that he had been drinking. The victim said she was lying in bed with Jolin when she asked him to move over. She said when Jolin didn’t move, she told him it was her bed and he doesn’t own it. The victim said at that point, Jolin urinated in the bed while she was still in it. The victim said she asked Jolin to leave and he became very aggressive, punching the bedroom TV and cracking the screen. Jolin was arrested and taken to the Marion County Jail, where he was released on $500 bond. (https://bit.ly/3a02pUG)
BIG SCREEN-LITTLE SCREEN: Brought to you by ChannelSurferTV.com

SCOOP OF THE DAY: Brought to you by FunkyMonkeyShirts.com
An 86-year-old South Carolina man was busted for armed bank robbery. (https://bit.ly/2QSl65b)

The world’s richest man, Amazon CEO Jeff Bezos, is being slammed for donating just $690,000 towards the Australian brushfires. (https://bit.ly/2sq1ZGf)

Pinterest passed Snapchat as the third-biggest social media platform in the U.S. in 2019, per eMarketer.

Amazon notified its third-party merchants that they can resume using FedEx's Ground network to ship Prime orders, reports the WSJ. Amazon instituted a ban almost a month ago.

Boeing reported negative orders for 2019, meaning it had more orders canceled than placed. According to a spokesman, that hasn’t happened in at least 30 years.

The Very Hungry Caterpillar, 1984, and How to Win Friends and Influence People were some of the New York Public Library’s most checked-out books of all time. What else have New Yorkers been reading for the past 125 years?
Find out here.

The longest wedding veil was the same length as 63.5 football fields. When Maria Paraskeva, a woman from Cyprus, got married in August 2018, her goal wasn't just to say "I do." She was also determined to set a record. "My dream as a child has always been to break the Guinness World Record title for the longest wedding veil," she explained. She fulfilled her dream by wearing a lace veil that stretched 22,843 feet and 2.11 inches, or as long as 63.5 football fields.

NEWS HEADLINES.... FROM SOMEWHERE IN THIS WORLD!
Dateline.... JapanA Japanese Billionaire has posted a dating ad looking for a woman to join him on a trip to the moon. (https://bit.ly/2QNl8LE)

WEIRD NEWS: Brought to you by WeirdGiftOfTheDay.com
A man from upstate New York has been arrested for trafficking rare wild cats from Africa and selling them on the website ExoticCubs.com. 38-year-old Christopher Casacci allegedly imported and sold dozens of caracals, a wild cat native to Africa, and servals, known for their spotted coats. The federal government said that Casacci obtained the cats by “falsely declaring the animals as domesticated breeds” on shipping records from February to June of 2018. Caracals, also known as the “desert lynx,” can grow to approximately forty pounds. Both species are protected under the Endangered Species Act and cannot legally be sold in New York. Casacci, who is from a small town outside Buffalo, is charged with violating the Lacey Act and the US Animal Welfare Act. He pleaded not guilty and faces up to five years in prison if convicted. (https://bit.ly/2uMmOfN)

According to local reports, a British socialite stole nearly $300,000 from her dementia-suffering grandmother to fund her lavish lifestyle, including designer clothes and stays in Beverly Hills hotels. 38-year-old Emily Evans-Schreiber had only about $50 in her bank account when she was given control of her 94-year-old grandmother Rosina Evans’ finances. The former model’s mother had become worried about her daughter’s “high life” in London, and bought her a house in Naseby, tasking her with taking care of her grandma. Over the next eight months, Evans-Schreiber blew the cash on jet-setting, high-end hotels, and cosmetic treatments. Eventually, her mom became suspicious about how her jobless daughter was managing to afford her luxe lifestyle — and called the bank and the police. Bank statements for Rosina’s account showed the close to $300,000 in transfers to Evans-Schreiber, labeled as “bills,” “care,” and “savings.” She plead guilty to one count of theft and the judge handed down a two-year sentence, suspended for twenty months. (https://bit.ly/36RWpv4)
FAKE NEWS.... OR FLORIDA?!
I read a headline and Heidi (and you) need to guess if the story is FAKE NEWS or something that really happened in the state of FLORIDA.

A Lee County man attempted to rob a convenience store using his finger as a gun ….. FLORIDA (https://bit.ly/2MknuOh)