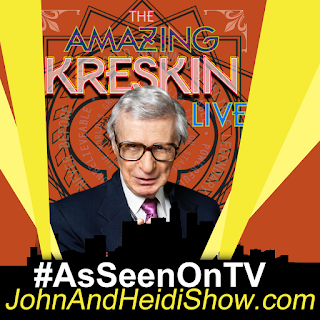 Our New Year's Day guest will once again be The Amazing Kreskin. With a showman’s flair, a comedian’s wit, and the capacities of a bona fide Mentalist or thought reader, The Amazing Kreskin has, for six decades, dramatized the unique facets of the human mind…his own. His very name has become an integral part of pop culture throughout the world. During the past fifty years Kreskin has had a television series, his own board game by Milton Bradley, twenty published books, and a major motion picture inspired by his work. http://www.amazingkreskin.com/

A study by the Center for Disease Control found that petting puppies at a pet store can make you sick. (https://cnn.it/2s45WAb)
THIS IS YOUR BRAIN ON DRUGS:
Brought to you by TimeForRehab.com! Each day we talk about people doing dumb things under the influence, but addiction is no laughing matter… if you or someone you know needs help, we're here to help! You can learn more at TimeForRehab.com.

Lil Wayne could be facing federal charges after authorities found firearms and drugs aboard a private jet that the rapper flew into Miami yesterday. Federal agents obtained a search warrant to inspect the aircraft at Miami-Opa-locka Executive Airport after Miami-Dade Police were tipped that it was carrying weapons and marijuana. The search carried out by the FBI, Bureau of Alcohol, Tobacco, Firearms and Explosives and other agencies reportedly turned up cocaine and a gun. Lil Wayne, was “cleared” to leave the scene last night, according to his defense attorney.
https://www.miamiherald.com/news/local/crime/article238672418.html

In “1917,” two young British soldiers during World War I are given the impossible mission of delivering a message deep in enemy territory that will stop 1,600 men, and one of the soldier's brothers, from walking straight into a deadly trap. Andrew Scott and Benedict Cumberbatch star in the R-rated film... In “Little Women,” four sisters come of age in the aftermath of America's Civil War. The PG film stars Saoirse Ronan and Emma Watson... “Just Mercy” tells the story about civil-rights attorney Bryan Stevenson in his effort to free a wrongly-condemned death-row prisoner. Jamie Foxx and Brie Larson star in the PG-13 drama... Alfre Woodard and Aldis Hodge star in “Clemency,” which centers on a prison warden who confronts psychological and emotional demons as she prepares to execute another inmate. It's rated R... In the animated feature “Spies in Disguise,” the world's best spy is turned into a pigeon and must rely on his nerdy tech officer to save the world. The film carries a PG rating.

SCOOP OF THE DAY: Brought to you by FunkyMonkeyShirts.com
A 58-year-old Colorado Springs, Colorado, woman has been arrested for allegedly hiding 26 young children behind a false wall of her daycare center. Police arrested Carla Faith after officers visited the building and discovered the kids and two adults in the basement. The children were all younger than 3 years old. Faith is facing charges that include two counts of reckless child abuse without injury and one count of trying to influence a public servant. Three of Faith’s employees are also facing charges following a six-week police investigation triggered by complaints that the daycare was housing more children than permitted by its license.

Almark Foods has announced an expanded recall of hard-boiled eggs that have been sold nationwide stores including Costco, Walmart, Kroger and Trader Joe's. The recall was originally issued last week after the Food and Drug Administration linked the eggs to a listeria outbreak that killed one person and caused illness in several others. The expanded recall now affects all products manufactured at Almark Foods' facility in Gainesville, Georgia. The affected products have a "Best If Used By" code starting with a "G," indicating they were made at the Gainesville location.

Police in Northern California have arrested two people who allegedly stole more than 100 packages and envelopes from residents' mailboxes in days before Christmas. According to the Butte County Sheriff's Office, a 41-year-old man and 26-year-old woman are facing charges of reckless evading, identity theft, mail theft and violation of probation. The two were taken into custody following a short pursuit. Sheriffs recovered 108 pieces of mail addressed to approximately 56 people at 37 different addresses in the towns of Durham and Chico.

A Vermont police department has installed a holiday-themed radar sign that illuminates "naughty" for speeders and "nice" for drivers abiding by the speed limit. The department in the city of Chester, about 90 miles from Burlington, posted photos on its Facebook page with the caption: "We received a request direct from the North Pole to remind everyone that Santa is still making his list and checking it twice, and to make sure to have a safe and happy holiday season!" - https://www.wrcbtv.com/story/41482738/town-puts-up-radar-signs-to-tell-drivers-if-they-are-naughty-or-nice

Each year there are more than 40,000 toilet related injuries in the United States. Some of these make sense, like a child of infant falling in. Others are attributed to toilet seats falling down, or complications due to bowel movements.

NEWS HEADLINES.... FROM SOMEWHERE IN THIS WORLD!
Dateline.... Hong Kong

The Hong Kong political crisis is now playing out in the virtual world.
Popular online video game "Grand Theft Auto V" has become a battleground between protesters in the semi-autonomous Chinese city and their rival players in mainland China.
The online duel began after Hong Kong players discovered that their in-game avatars could dress like protesters, wearing black clothing, gas masks and yellow safety helmets. They shared the discovery last week on LIHKG, a social media platform and discussion forum similar to Reddit that is popular in Hong Kong.
Hong Kong has been rocked by anti-government protests for more than six months, with escalating violence and anger on all sides. The demonstrations began in June after the government introduced a bill that would have allowed the extradition of people across the border to face trial in mainland China.https://www.cnn.com/2019/12/27/tech/grand-theft-auto-hong-kong-intl-hnk/index.html

WEIRD NEWS: Brought to you by WeirdGiftOfTheDay.com
It seems flying with a pet opossum can be troublesome. Gerald Tautenhahn thought he had everything taken care of before traveling with his furry friend, Zatara, but he said that wasn’t the case. Two months after his father passed away in Austin, Texas, Tautenhahn wanted to spend time with his mother and cheer her up by bringing Zatara along for the trip. “I called around. I called the Department of Transportation,” he said. “They said if it’s OK with the airlines, (it’s) OK with us.” According to Tautenhahn, JetBlue said it wasn’t a problem if Zatara was in an approved pet carrier. So, the pair flew to Texas with no issues. But when it was time to come back to California, a federal air marshal told Tautenhahn he wasn’t sure if it was OK to have an opossum on board. “And then they said, ‘Well, how did you get here?’ Just like this, I flew on a plane,” he said he told them. Tautenhahn said he was told he couldn’t fly back and that him being allowed on the first flight was a mistake. “I did my homework, and I was allowed to fly out there,” Tautenhahn said. “The least you can do is let me return home with her.” He said a representative encouraged him to rent a car and drive back to California. After four days in Austin, Tautenhahn said he booked a ticket on United Airlines, paid the pet fee, put Zatara in an approved carrier and walked on board. He was soon back home. But Tautenhahn has a word of advice for anyone else looking to travel with an opossum. https://www.wvlt.tv/content/news/Man-traveling-with-pet-opossum-runs-into-issues-getting-back-home-566319831.html

A 17-year-old stole a plane at Fresno Yosemite International Airport and crashed it into a nearby building on Wednesday, airport officials said. It happened near Shields and Winery avenues at the Signature TECHNICAir Aircraft Maintenance building. Around 7:30 a.m., a 17-year-old breached the fence of the Fresno Yosemite International Airport and entered a King Air 200 propeller driven aircraft and was able to start one engine, airport officials reported. The incident occurred in the General Aviation area of the airport. “The aircraft then began to move and pivot and crashed into a building and a fence on airport property,” airport officials said. “The aircraft never became airborne, and there was no fire. The aircraft sustained substantial damage. No injuries occurred in this incident.” No passengers or commercial airlines were ever at risk in this incident, airport officials said. Airport and Fresno police officers responded to a 9-1-1 call of the aircraft theft and crash. Fresno officers arrived first and contacted the teen, who was seated in the pilot’s seat and wearing the pilot headset. She appeared to be disoriented and was uncooperative when she was taken into custody for theft of an aircraft. The female will be booked at juvenile hall later Wednesday. Family members showed up to the scene and told us they were contacted by law enforcement who said their 17-year-old daughter had taken the plane. The motive is still under investigation but there is no indication of any ties to domestic terrorism. No other information was immediately available.
https://www.wate.com/news/17-year-old-steals-plane-crashes-it-into-building/
FAKE NEWS.... OR FLORIDA?!
I read a headline and Heidi (and you) need to guess if the story is FAKE NEWS or something that really happened in the state of FLORIDA.

Two Florida women at a retirement home were arrested for spraying staff with a fire hose. FAKE NEWS