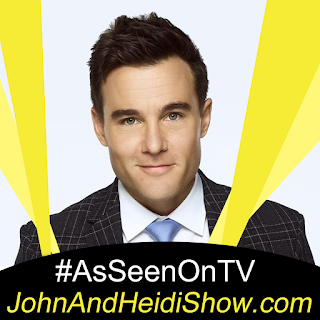 Rob Belushi is the host of the NEW game show Get A Clue on the Game Show Network. He is the son of Jim Belushi and nephew of John Belushi.

A study published in the Journal of Behavior found that people who second guess themselves make worse decisions than people who go with their gut. (https://bit.ly/39NbaRI)

A Michigan man faces up to 18 years in prison after his conviction for selling heroin and fentanyl in Knoxville. Denzel Damoan Washington, 27, was convicted of delivery of heroin to a drug-free zone, possession with intent to sell heroin in a drug-free zone, possession with intent to sell fentanyl in a drug-free zone and simple possession of marijuana. Knoxville police investigators learned Washington had returned to Knoxville from Michigan on March 8, 2018. KPD officers took Washington into custody after using an informant to purchase drugs. During a subsequent interview, Washington produced a bag of heroin and fentanyl from inside the back of his pants. “One part of the solution to the overdose epidemic is to stop the flow of drugs like heroin and fentanyl into our community,” said Knox County District Attorney Charme Allen. “Taking these drugs off the street helped to save lives.” Sentencing on the case is scheduled for February 21. He faces between eight and twelve years without the possibility of parole on the heroin charges and three to six years on the fentanyl charge. In addition to finding Washington guilty, the jury also assessed fines totaling over $300,000. https://www.wate.com/news/michigan-man-named-denzel-washington-convicted-of-drug-dealing-in-knoxville/

BIG SCREEN-LITTLE SCREEN: Brought to you by ChannelSurferTV.com
Ellen DeGeneres is teaming with Fox to bring her recurring The Masked Singer spoof into a full-fledged reality show spinoff. The Masked Dancer will follow similar format to The Masked Singer.


Justin Bieber announced on Instagram that he has Lyme disease and chronic mono. The weird thing is that 400,000 people clicked LIKE. (https://bit.ly/304gdch)
SCOOP OF THE DAY: Brought to you by FunkyMonkeyShirts.com
Amid an increasingly tough U.S. labor market, Taco Bell is betting a higher salary will help it attract workers and keep them on the team. The chain will test a $100,000 salary in select restaurants in the Midwest and Northeast. (https://bit.ly/2R2BOO8)
(We have another Taco Bell story later in the show as our MOMENT OF DUH)


The San Francisco 49ers have enlisted the NFL’s first ever emotional support dog to help players deal with stress. Zoe is a tiny French Bulldog. (https://cbsloc.al/2Fyr98t)


The Los Angeles Coroner ruled that a sidewalk Superman suffocated to death after he crawled inside a mailbox while high on meth. (https://pge.sx/2Nm0eB3)
(we have a FUN FACT below about Superman)


Charmin unveiled a robot at the Computer Electronics Show that will bring you a new roll of toilet paper if you run out while you’re on the bowl. They also have an alert system that tells you if a bathroom smells before you go in there. They also unveiled a virtual reality porta potty that has surround sound and a headset so you can keep watching your shows while you’re on the bowl. (https://bit.ly/2tOrdOW)

Superman didn't always fly. The original comic book Superman could leap tall buildings in a single bound. But then he had to come right back down to Earth—because he didn't fly. It wasn't until the 1940s, when animators for a new animated series decided it would be too difficult to routinely draw him bending his knees, that it was decided that Superman could take off into the air. Readers got to see smooth animation, and a superhero gained a new power.


NEWS HEADLINES.... FROM SOMEWHERE IN THIS WORLD!
Dateline.... PeruA video of a Peruvian ceremony where people fist fight to air out their grievances has gone viral. The annual fist fighting ritual is known as “Takanakuy” (https://bit.ly/2R099t0)

WEIRD NEWS: Brought to you by WeirdGiftOfTheDay.com
A Wisconsin man was busted for allegedly assaulting a woman — and then dousing her in ranch dressing. 53-year-old Racine resident Maurice Thomas was in the lady’s home when the two got into an argument and he allegedly threatened to “smash” her face. He then allegedly grabbed her by her throat and pushed her up against a wall. The conflict turned messier when Thomas snatched a container of ranch dressing from a table, and started chasing the woman, “squirting the ranch dressing at her.” The woman called out for help after the brute allegedly tossed the actual bottle at her — hitting her in the chest. Another person in the home then called 9-1-1. When cops arrived at the scene, the woman was covered in ranch dressing from head to waist — as was much of the house. Thomas was charged with stalking, burglary, and skipping bail. (https://bit.ly/301Bkf4)

A hungry burglar broke into a Taco Bell in Georgia on Christmas morning, cooked some food in the restaurant’s deep fryer, then laid down for a nap after his meal. The suspect was caught on video climbing into the fast food joint in Lawrenceville through an open drive-through window. The burglar, who was wearing headphones when he broke in, then surveyed the Taco Bell’s kitchen before firing up the deep fryer and cooking some food. The Atlanta Journal-Constitution reported that he then ate a meal and laid down on the floor for an hour-long nap. An employee who opened the restaurant later that morning noticed food on the counter and called police. The suspect, who is still at large, stole a computer and a tablet from the restaurant before running off. (https://bit.ly/35DaRWg)
FAKE NEWS.... OR FLORIDA?!
I read a headline and Heidi (and you) need to guess if the story is FAKE NEWS or something that really happened in the state of FLORIDA.

A man was arrested for menacing after he ran into a Jacksonville convenience store with an alligator in his arms ….. FLORIDA (https://bit.ly/2v2ecyN)