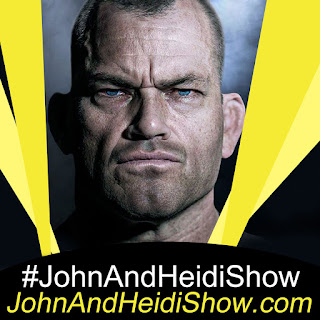 A survey by U.S. World And News named Switzerland as the best country in the world. Canada is now second on the list. The U.S. came in 7th. (https://bit.ly/2FUZ3Vg)


THIS IS YOUR BRAIN ON DRUGS: Brought to you by TimeForRehab.com!
Each day we share stories about people doing dumb things under the influence, but addiction is NO LAUGHING MATTER! If you or someone you know needs help, we're here! Learn more at TimeForRehab.com.

A driving teacher was arrested in Germantown, Wisconsin for driving drunk while teaching a student. Before that, he hit the Germantown High School principal. It was all caught on surveillance video. The video shows the instructor, Corey Malone, backing up into a gate that then hits the Germantown High School principal. According to police, when they tested Malone his blood-alcohol level was three times over the legal limit. In the backseat of the car while all this is happening was a student that Malone had picked up for his driving lesson. Malone later told police he didn't remember having that student in his car. According to the police report, the owner of the driving school told police “she smelled what she thought was alcohol” on Malone before he went to Germantown High School. She says he told her “he quit drinking at midnight.” Malone later told police “it was probably closer to 2:00 a.m.” He was taken into custody for first offense OWI. (https://bit.ly/35R5l2s)

Critics are killing “Doolittle,” as the film currently holds a 17% rating on Rotten Tomatoes. (https://bit.ly/38eYy4p)


Ronan Farrow and HBO are teaming up to make a documentary about threats against journalists. (https://bit.ly/2uNGFer)

SCOOP OF THE DAY: Brought to you by FunkyMonkeyShirts.com
A video of a woman walking topless through the Miami Airport has gone viral. (https://cbsloc.al/3agmshz)


Philippines President Rodrigo Duterte told reporters that he’s not threatened by the volcano that’s erupting in Manila. In fact, he said he’ll pee on on it and eat the volcanic ash that comes out of it too. (https://bit.ly/2tfCyYs)


Special Forces Captured a 560-pound ISIS terrorist on Friday who had to be hauled away on a flat bed truck. (https://bit.ly/38mCYuI)


Amazon is developing new terminals that will link your credit card information to your palm print so you can pay for groceries by waving your hand at checkout. (https://on.wsj.com/2Rc2c9H)


Jaguar Land Rover is developing seats that will massage your butt as you drive.(https://bit.ly/2Gh9VNr)

Kids ask 300 questions a day. A 2013 U.K. study from online retailer Littlewoods.com observed young children and recorded the questions they asked the adults around them. The children tended to turn to their mothers for answers, and these moms could end up answering an average of nearly 300 questions per day, or one question every two-and-a-half minutes, the study found. The moms reported that the hardest questions they were asked included "Why is water wet?" and "What are shadows made of?"

WEIRD NEWS: Brought to you by WeirdGiftOfTheDay.com
A 37-year-old woman was arrested Saturday after deputies say she tried to build an explosive device inside a Walmart while she had a child with her. Emily Stallard faces charges of attempted arson of a structure, fire bombing, contributing to the delinquency of a minor, child abuse, and battery on a law enforcement officer. The incident took place just before 6:00 p.m. at the Walmart. A security guard noticed Stallard roaming the aisles of the store and opening unpaid items such as “flammable materials, projectiles and matches.” The guard called the Sheriff’s Office and also notified an off-duty Florida Fish and Wildlife Conservation Commission officer who was inside the store at the time. The guard and the off-duty officer approached the woman and detained her until deputies arrived. Deputies said that the woman had a child with her at the time of the incident. Stallard, of Tampa, was being held in the Hillsborough County jail on Tuesday in lieu of $8,500 bail. (https://bit.ly/2srr6Z4)

A Chicago pastor is accused of stealing nearly $1 million from a food program for needy children — using some of the cash to buy himself a flashy new Bentley. Rev. Clarence Smith Jr., who led New Life Impact Church, was indicted on fraud charges for bilking more than $900,000 given to the ministry for a federally funded food program through the Illinois State Board of Education. Prosecutors allege that 45-year-old pastor didn’t follow through with feeding the hungry — and instead deposited the checks into his own bank account. Smith then used the money to buy himself a brand new, $142,000 Bentley Flying Spur luxury sedan and on other expenses. He was released on his own recognizance after pleading not guilty to the four fraud-related counts in federal court. North Lawndale resident Ravin Cosey said the pastor’s various luxury goods raised alarm bells prior to the feds’ investigation. “He was coming around in Jordans and Bentleys and new cars, and I’m like, ‘Wait a minute, pastors don’t do that,'” Cosey told news station WLS-TV. (https://bit.ly/3afqYNj)
FAKE NEWS.... OR FLORIDA?!
I read a headline and Heidi (and you) need to guess if the story is FAKE NEWS or something that really happened in the state of FLORIDA.

A Port St. Lucie man was arrested for trying to trade marijuana for food at a McDonald’s Drive Thru ….. FLORIDA - (https://bit.ly/2U3J783)