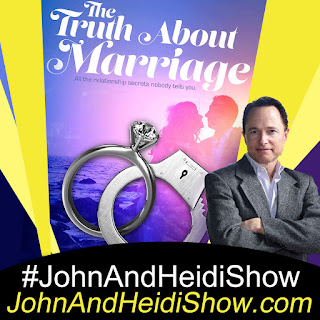 On Valentine's Day 2020, both the film, and the companion book: The Truth About Marriage will open in the top 10 cities across the country, be available on the major streaming entities worldwide, and in bookstores nationwide. In this 81 min documentary, new evidence answers the question: Why do relationships fail and how do we find one that doesn't? Friday we'll talk to Award-winning documentarian Roger Nygard as he explains why relationships fail; and provides scientifically researched tips on how to find one that goes the distance.
TRAILER - https://vimeo.com/289217399

SURVEYS, STUDIES & SUCH: Brought to you by BetterCreditCards.com
A Gallup Poll found that 90% of Americans are satisfied with the way things are going in their personal life. (https://bit.ly/31vzpAe)
THIS IS YOUR BRAIN ON DRUGS: Brought to you by TimeForRehab.com!
Each day we share stories about people doing dumb things under the influence, but ADDICTION IS NO LAUGHING MATTER! If you or someone you know needs help, we're here! Learn more at TimeForRehab.com.
The mayor of Mahwah, New Jersey admitted last week that he drank so much during a party at a township employee’s house that he took off his pants and passed out in her bed. Mayor John Roth said in an interview with the news organization that he apologized to the unidentified employee, who did not wish to comment in the report. The mayor’s actions were detailed in an anonymous letter signed by the “concerned employees of the township of Mahwah” that was circulated last week, according to the report. Roth was elected Nov. 6th, 2018 on the same ballot where former Mayor Bill Laforet was recalled from office. The recall of Laforet was launched in January 2018 by a group of citizens who were upset about Laforet accusing former Department of Public Works Director Ed Sinclair in 2015 of having pornography on his work computer, based on an anonymous letter he received. (https://bit.ly/2RZtuQR)

Whoopi Goldberg’s cannabis brand is going out of business after a rift between her and her partner. Most people didn’t even know that she had a cannabis brand. (https://pge.sx/31vHvIY)

86-year-old Larry King says the 26-year age gap with his wife took its toll on their relationship. (https://pge.sx/2vfzWKr)

Birds of Prey opened last week. Opening THIS weekend: Downhill (R); Fantasy Island (PG-13); The Photograph (PG-13); Sonic the Hedgehog (PG); What About Love (NR).
SCOOP OF THE DAY: Brought to you by FunkyMonkeyShirts.com

Expectant mom need to stop blaming their pregnancy for memory lapses, say experts who want to dispel the “baby brain” myth. Neither pregnancy nor motherhood confuse a woman’s brain, say the Australian researchers.

Switzerland has passed a new law that gives an automatic prison sentence to anyone making homophobic comments online. (https://yhoo.it/2S4lD4n)

Over 3,500 people remain quarantined onboard a cruise ship in Japan after two passengers were diagnosed with the coronavirus last Wednesday.
(https://bit.ly/2Ovf3BU)

Going shopping with the girl in your life is perpetually one of the worst things men can endure. An Instagram account captures how terrible. The Instagram account, miserable_men, includes original photos and user submissions of men looking despondent as they wait for their woman to wrap up her shopping.https://www.instagram.com/miserable_men/

Cereal is the easiest meal to make: pour it into a bowl or glass, add milk, use spoon. But if you’re the active type, people are going nuts over the CrunchCup, a travel mug where your cereal and milk don’t meet until they hit your mouth. You can eat everything from sweet Fruit Loops to crunchy granola on the go without ever slurping soggy cereal. https://amzn.to/2HcWP3S

Redheads aren't actually going extinct. Periodically, a rumor starts on the internet that says natural redheads will become extinct by the year 2060. Lucky for gingers everywhere, this is a myth. It's true that the gene that causes red hair is recessive, meaning that both parents must have it for their child to have red hair. However, even non-redheads can carry the red hair gene, and it can pop up unexpectedly in generations down the line.

China has unveiled electronic tracking devices for people with the coronavirus.
(https://bit.ly/2UwKIXp)

Police in Connecticut are trying to identify a man they say got a job at a gas station and proceeded to steal $17,000 worth of merchandise and cash on his first, and only, solo overnight shift before disappearing. The man also stole his employment folder, which contained his personal information, so the store’s owner does not even know the worker’s name, Hamden police said in a statement Tuesday. Police responded to the Go On Gas store late last month. The owner told investigators he used an app on his cellphone to view the store security cameras and noticed that the new employee had left. The owner went to the store and determined that the worker had stolen lottery tickets, 89 boxes of cigarettes, and money worth a total of more than $17,000. The employment file was also missing. (https://bit.ly/2UwOiB0)

A Clearwater man is facing a felony charge after police say he threatened to shoot up his dentist’s office following a disagreement about his dentures. 66-year-old Bruce G. Clark was booked at the County jail on a charge of making threats of violence with a firearm. Bail was set at $10,000 and Clark was being held at the jail Thursday. According to an arrest report, Clark sent his sister to his dentist’s office on January 5th to pick up a pair of dentures that had been made for him. The office told the woman that she could not pick up the dentures for another patient. The sister then put Clark on the phone. “During the conversation (Clark) was belligerent and used foul language,” the arresting officer wrote in the report. “He told the victim 'I ought to come down there and shoot up all you motherf-----s.” The officer noted that this put the victim in fear and that she was “constantly looking out the window for his vehicle while working since this occurred.” (https://bit.ly/385rX1r)

A Brockville woman was arrested for assault after beating her boyfriend with a pork chop ….. FLORIDA (https://bit.ly/2tcH1r8)