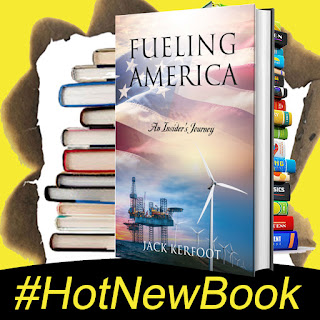 Jack Kerfoot is a scientist, energy expert and author of FUELING AMERICA: An Insider’s Journey. He has been interviewed on over 30 syndicated radio and television shows, and started his professional career in the energy industry in the 1970s, when America was paralyzed by an energy crisis. Kerfoot has spent 40 years traveling the world working with scientists, bureaucrats, ministers, tycoons, sheiks and potentates. He is the principal of JL Kerfoot Energy Services and is an outspoken advocate for renewable energy. He blogs on his website, “Our Energy Conundrum” at www.jackkerfoot.com

SURVEYS, STUDIES & SUCH: Brought to you by BetterCreditCards.com
A survey by the New York Post found that 200 couples get divorced on Valentine’s Day each year. (https://bit.ly/2vhqlmv)

THIS IS YOUR BRAIN ON DRUGS: Brought to you by TimeForRehab.com!
Each day we share stories about people doing dumb things under the influence, but ADDICTION IS NO LAUGHING MATTER! If you or someone you know needs help, we're here! Learn more at TimeForRehab.com.
An Ohio man was arrested early Monday morning after authorities said he called the police more than twenty-five times to get help looking for a lost hoodie. 32-year-old Harves Gardner faces a felony charge of disrupting public services. Police said Gardner requested police assistance and officers responded. “When police arrived (the) defendant only wanted rides around town to find his hoodie that he lost,” officers reported. Police said Gardner was highly intoxicated and officers told him to go back to bed, but he continued calling and gave different locations for the police to respond. Gardner is being held at the Hamilton County Justice Center. He is scheduled to appear in court Tuesday.(https://bit.ly/373BNzh)

BIG SCREEN-LITTLE SCREEN: Brought to you by ChannelSurferTV.com
Joaquin Phoenix’s Oscar Acceptance speech has gone viral after he called out humans for “SPECIESISM.” (https://bit.ly/38h4QB0)

The movie industry continues to be shocked by “Parasite’s” Best Picture win at “The Oscars.” (https://dailym.ai/2OJooGx)

Hooters is giving away free chicken wings to single people who show up on Valentine’s Day. It’s called the “Shred Your Ex” Party. You put a picture of your ex in a paper shredder and they give you free wings. (https://bit.ly/2UyERRw)

A study that looked at 475 NFL games among 30 teams found that in cities where the home team lost a game on Sunday, the following Monday there was a 16 percent spike in the consumption of high-fat, high calorie processed foods.

O.J. Simpson blasted Gayle King for asking about Kobe Bryant’s rape allegations, saying this isn’t the right time to bring up his past. (https://bit.ly/38hQ259)

Kylie Jenner told Harper’s Bazaar she likes to eat bone broth all day long. Kylie says her favorite snacks are Barbecue Lays, Chili Cheese Fritos, and Extra Cheesy Goldfish. Which are all made by the same company. (https://yhoo.it/2Hbqk6p)

Dogs actually understand some English. Some owners of disobedient dogs may have trouble believing this, but dogs can learn to recognize a vocabulary of about 165 words. Unsurprisingly, dogs respond best to short words, as well as words with hard consonants like "t" or "r," which may explain why they can hear "treat" from three rooms away. If you want to try to expand your dog's vocabulary, be consistent—for example, always call a meal "dinner" instead of breakfast, lunch, or supper. And don't believe the myth: Old dogs can learn words just as well as young dogs.

A former Ohio football coach is on an all-out blitz against the NFL over its Super Bowl halftime show with Jennifer Lopez and Shakira – saying he intends to sue because their revealing outfits put him “in danger of hellfire.” Minister Dave Daubenmire said he plans to sue the league, Pepsi, Fox and several other companies for the “crotch-grabbing” performance. “I think we ought to go sit down in a courtroom and present this as evidence of how whoever is keeping me from getting into the kingdom of Heaven,” Daubenmire said in a video. The Super Bowl LIV halftime extravaganza showcased the two women gyrating to Shakira’s “Hips Don’t Lie” and Lopez’s “On the Floor,” which Daubenmire slammed as a “porn show” unfit for young viewers. Daubenmire said he was appalled by the “crotch-grabbing,” “soft pornographic” performance. “They penetrated the sanctity of my home,” he added. Daubenmire said he has spoken with a lawyer and plans to go forward with the lawsuit against the NFL, claiming he would be satisfied by scoring an $867 trillion settlement. (https://bit.ly/2OCtft1)

A Florida man armed with a knife was arrested outside the White House after threatening to “assassinate” President Trump. 25-year-old Roger Hedgpeth was busted Saturday afternoon after making the alarming threats to a Secret Service agent patrolling about a block away from the executive mansion. “I am here to assassinate President Donald Trump,” Hedgpeth warned, according to the police report — also threatening, “I have a knife to do it with.” Authorities say that Hedgpeth was found with a 3 1/2-inch knife in a sheath on his left hip, and an empty pistol holster on his right one. Trump had no scheduled events and was believed to have been inside the White House at the time. Hedgpeth, from Brandon, Florida, was arrested on a charge of making threats to do bodily harm and possession of a prohibited weapon. (https://bit.ly/37c4euT)

A Parrish Man was arrested for assaulting his wife with a Taco Bell Burrito ….. FLORIDA (https://bit.ly/2HDwoYk)