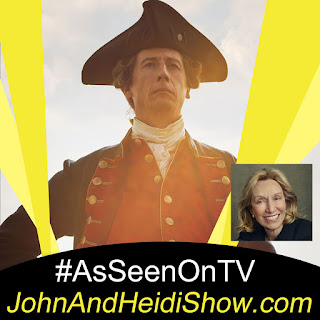 Today we visit with Doris Kearns Goodwin, world-renowned presidential historian and Pulitzer Prize®-winning, New York Times #1 bestselling author. She executive produced the miniseries WASHINGTON that aims to bring to life the man whose name is known to all, but whose true story is understood by few.

SURVEYS, STUDIES & SUCH: Brought to you by BetterCreditCards.com
A study from the University of Copenhagen found that short men are more likely to develop dementia. (https://bit.ly/3c1hNku)

THIS IS YOUR BRAIN ON DRUGS: Brought to you by TimeForRehab.com!
Each day we share stories about people doing dumb things under the influence, but ADDICTION IS NO LAUGHING MATTER! If you or someone you know needs help, we're here! Learn more at TimeForRehab.com.
A closet and safe under a 64-year-old grandmother’s bed in a senior complex in St. Petersburg, Florida are not the typical spots where police find a cache of illegal dope and guns. But that’s what a federal task force found when it dismantled a drug-trafficking organization and arrested eleven suspects, including nine from the Sunshine City. Now, recent court documents reveal how the organization used the Viridian, a senior housing complex as a stash house for the drugs and guns. Officers accused 42-year-old Ahmad Rashad Weston of leading the ring, saying he often worked with his brother 38-year-old Charleston Shellie Long and their mother 64-year-old Serena Weston from inside her apartment on the seventh floor. Investigators seized seven pounds of marijuana, four handguns, and numerous magazines and bullets from the senior complex. Two of the guns were reportedly stolen in earlier heists. When officers served the search warrant, Weston opened her door holding a small child. Ahmad Weston and Long are in the Pinellas County Jail awaiting a trial on federal charges. (https://bit.ly/39EOSkg)

BIG SCREEN-LITTLE SCREEN: Brought to you by ChannelSurferTV.com
Corey Feldman announced plans to release his new documentary on March 9th, which names the Hollywood Producers who abused him and Corey Haim. (https://bit.ly/2w37agu)

Quentin Tarantino and his wife Daniella Pick welcomed their first child after she gave birth to a baby boy in Israel. (https://bit.ly/3a1Kqwn)

Nearly one in four women say they wish their man had better table manners.

A group of instrument movers’ efforts to carry a pianist’s $194,000 piano out of a recording studio in Berlin ended in disaster. Angela Hewitt, one of the world’s leading classical pianists, revealed the calamity in a heartbreaking Facebook post: “I feel ready now to share a very sad piece of news. It happened ten days ago, and has been such a shock to me that I didn’t immediately want to share it with the world. The piano movers came into the control room (where I was finishing up with my producer) to say they had dropped my precious Fazioli concert grand piano.” She said the piano cannot be repaired.

It’s 2020 and there is simply no excuse to be caught with chapped lips. Even the pickiest person can find a lip balm they’ll like. And we’re pretty sure a large chunk of the population will go for the new Oreo-flavored lip balm now available on Amazon. The container is basically the size of an actual Oreo, so once you use up all the lip balm you can clean it out and can store a single Oreo with you wherever you go. https://amzn.to/2HNsTvC

A man in Russia was picked up by by prison police as he tried to use a crossbow to fire phones into a jail for inmates to use. The man had 18 phones strapped to the ends of crossbow bolts with tape.

The Comic Sans font came from an actual comic book. Most adults nowadays who know anything about graphic design steer away from using the Comic Sans font in formal documents. The font was designed by Vincent Connare, who drew direct inspiration from his favorite comic books, including Alan Moore and Dave Gibbons' celebrated Watchmen series.

Dateline.... EnglandBritish MP John Grundy has apologized for a video that shows him flashing a woman in a pub. (https://bit.ly/3a7fFpw)

According to the New Smyrna Beach, Florida Police Department, a man who felt like he was being ignored set his hospital bed on fire while another patient was in the room in an attempt to get a nurse’s attention. According to authorities, John King admitted to setting a plastic bag on fire on Saturday because he felt the AdventHealth New Smyrna Beach staff were ignoring his request to bring him his clothes and he believed that the fire would get their attention. King’s roommate in the hospital explained to officials that he had seen King light a small object on fire, but convinced him to put out the flame. However, when he returned to his bed behind a curtain, he saw King relight the fire and the roommate used the emergency button to notify staff. King gave authorities the silver and red Bic lighter he used to start the fire, records show. He was arrested on a felony charge of arson. According to the hospital’s administrator, the bed was damaged beyond repair and a new one has to be ordered to replace it, which costs $4,000. (https://bit.ly/3a5dDXg)

MOMENT OF DUH: Brought to you by SingleStudentLoan.com
An Irving-based demolition company apologized Thursday for tearing down the wrong home in Dallas. The home in the Vickery Place neighborhood was mistakenly demolished on Wednesday after JR’s Demolition pulled up in front of the wrong house. It was a mistake neighbors around the home known as the “pink house” realized right away. David Walkington lives a couple of doors over. “We walked over here and took a look at it, and it was just shocking,” Walkington said. JR’s Demolition had an active permit to tear down the home at 5336 Richard Avenue, but instead ended up several homes away on Wednesday. Owner Bobby Lindamood told WFAA his small business made a mistake, but thought they were initially at the correct location. (https://bit.ly/3bXSVu2)


FAKE NEWS.... OR FLORIDA?!
I read a headline and Heidi (and you) need to guess if the story is FAKE NEWS or something that really happened in the state of FLORIDA.
A Tarpon Springs man was arrested after he drunkenly called 9-1-1 and claimed his wife was a black widow spider ….. FLORIDA (https://bit.ly/2ERA9TL)
GOOD NEWS: Brought to you by BetterCreditCards.com

Ohio Church Wipes Out Over $46.5 Million In Medical Debt