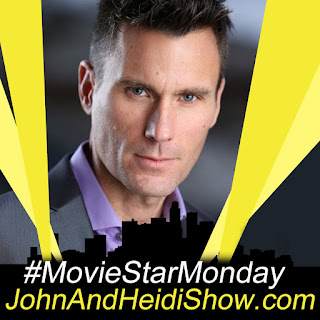 It's another #MovieStarMonday. Our guest is a fairly new actor, Eric James Morris. He's from Atlanta and has been in several movies and TV shows. We're going to visit with him about how he became an actor and how others can do it too! https://www.imdb.com/name/nm8252717/

A recent survey tested Americans’ knowledge regarding some of today’s top logos. The top five:
1. Apple
2. McDonald’s
3. Coca-Cola
4. Nike
5. Starbucks
THIS IS YOUR BRAIN ON DRUGS: Brought to you by TimeForRehab.com!
Each day we share stories about people doing dumb things under the influence, but addiction is NO LAUGHING MATTER! If you or someone you know needs help, we're here! Learn more at TimeForRehab.com.

A boozed-up Minnesota man beat a driver with a tire iron because he confronted him about parking illegally in a handicapped space. Stephen Todey was charged Tuesday with third-degree assault in the Brooklyn Center attack that left an unidentified male victim unconscious outside a Walgreens on Sunday. 24-year-old Todey allegedly hit the victim with a tire iron he retrieved from his car after the man confronted him over the handicapped parking space, saying he wanted to use the spot because his girlfriend suffers from multiple sclerosis. The woman’s symptoms were “extremely bad” that evening and a car belonging to Todey that did not have a handicap sticker was in the space. Todey also punched the victim several times, knocking him to the ground. Todey then continued to kick and stomp the victim, leaving him with a broken nose and a traumatic brain injury that led to him losing consciousness. Todey, who was arrested later Sunday, was found to be “extremely intoxicated” at the time. (https://bit.ly/36Fmrke)
BIG SCREEN-LITTLE SCREEN: Brought to you by ChannelSurferTV.com

The first trailer for Chris Rock’s Saw reboot titled Spiral hit YouTube Wednesday — and it looks twisted. Starring Rock (also the executive producer) and Samuel L. Jackson, Spiral is a reboot of the now iconic 2004 horror film Saw, which spawned a large, gory franchise. Spiral is in theaters May 15. https://youtu.be/rgNlWypWmtw

SCOOP OF THE DAY: Brought to you by FunkyMonkeyShirts.com
A guy in Texas wanted to prove his company makes healthy dog food, so he ate it for a month.

A woman in China wanted to get some steamed buns from a nearby store, but she didn’t want to risk exposure to the coronavirus. So she sent a remote controlled car, equipped with some cameras, a loudspeaker, and a cargo box, instead. https://twitter.com/nowthisnews/status/1225236416889679872?s=20

A Salt Lake City, Utah, man is facing a felony charge after police say he stole a longboard skateboard. The 32-year-old said he stole it because his mother refused to give him money to buy one.

A National Sleep Foundation report says it’s important for people of all ages to establish a consistent sleep schedule.

FUN FACT FOR YOU:
Share this with your friends... they'll think you're really smart!
Water makes different pouring sounds depending on its temperature. If you listen very closely, hot water and cold water sound slightly different when being poured. The heat changes the thickness, or viscosity, of the water, which changes the pitch of the sound it makes when it's poured. What we feel as heat comes from the molecules of the water moving faster. Cold water is thicker and therefore makes a slightly higher-pitched sound.

NEWS HEADLINES.... FROM SOMEWHERE IN THIS WORLD!
Dateline.... China
A Chinese tourist turned heads after she was caught casually airing out her underwear at an airport. While waiting to board her plane the woman decided to take the opportunity to dry out her wet underthings on the backs of seats. Airport employees told her to put her belongings away and no further action was taken.

WEIRD NEWS: Brought to you by WeirdGiftOfTheDay.com
Deputies said a Florida man walked into a McDonald’s in Kissimmee on Sunday night wearing an employee uniform, walked behind a cash register, and helped another man place an order. Seconds later, the cash register drawer opened, and surveillance footage showed the man posing as a worker grab some cash before running out one door of the restaurant. Deputies from the Osceola County Sheriff’s Office said Sunday’s incident is the second one involving the same man wearing a McDonald’s uniform. Investigators said the first incident happened at another restaurant Dec. 25th, 2019. Deputies described the suspect wearing the McDonald’s uniform as a man in his mid-20s who is approximately 6 feet, 2 inches tall and weighs around 170 pounds. Anyone with information on the incidents is asked to call the Osceola County Sheriff’s Office. (https://bit.ly/38Hz7su)

“Can my children come to your grandson’s party?” That is the question Amanda Dohm asked her neighbor before losing her cool. According to an arrest report, Deputies arrested Dohm Thursday after she barged into her neighbors’ home and attacked her. The incident reportedly occurred all because Dohm's children were not invited to the party next door. Dohm is accused of marching over to her neighbor's home and demanding her kids attend the birthday party for Kim's grandson. Kim’s answer was a strong no, and she told Dohm to leave her property. Instead of leaving, Dohm decided to attack. The detailed arrest report said Dohm's husband had to calm her down. The husband pulled his wife outside of the home, as she continued to kick and punch her neighbor. The attack left Kim with a swollen cheek. Her ears and lips were also injured from getting beat. Dohm lost a fingernail and she lost her cellphone inside Kim’s home, which were two key pieces of evidence deputies used to arrest her for burglary with assault or battery. (https://bit.ly/2OphpCm)
FAKE NEWS.... OR FLORIDA?!
I read a headline and Heidi (and you) need to guess if the story is FAKE NEWS or something that really happened in the state of FLORIDA.

Police in the town of Bunnel arrested a couple for leaving their kids in the car while they watched the Super Bowl inside a bar ….. FLORIDA (https://cbsloc.al/2TsyVWH)