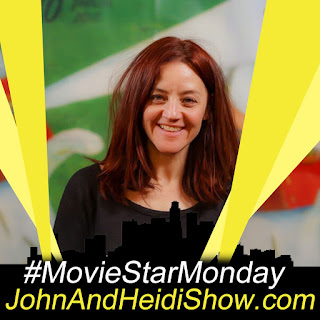 It's another #MovieStarMonday. Clarissa Jacobson Writer/Producer of Lunch Ladies LunchLadiesMovie.com and Author of the book “I Made A Short Film Now WTF Do I Do With It” (a guide to film festivals, promotion, and surviving the ride) AVAILABLE NOW - https://amzn.to/38hCnem

SURVEYS, STUDIES & SUCH: Brought to you by BetterCreditCards.com
A Market Watch survey found that jobless claims have fallen to a fifty year low.
(https://on.mktw.net/31DoQLx)

THIS IS YOUR BRAIN ON DRUGS: Brought to you by TimeForRehab.com!
Each day we share stories about people doing dumb things under the influence, but ADDICTION IS NO LAUGHING MATTER! If you or someone you know needs help, we're here! Learn more at TimeForRehab.com.
After pulling a car over for speeding late Saturday afternoon, Florida cops searched the vehicle and discovered an array of narcotics--cocaine, Ecstasy, meth, fentanyl, and GHB--stashed inside a pouch labeled “Bag Full Of Drugs.” According to police, the 2020 Kia was being driven by Ian Simmons, a 34-year-old Orlando resident. The only passenger in the sedan was another 34-year-old Joshua Reinhardt. The auto was pulled over on Interstate 10 in the state’s northwestern corner. The police photos show the narcotics, drug paraphernalia, and “Bag Full Of Drugs” bags seized by state troopers and Santa Rosa County Sheriff’s Office deputies. Simmons and Reinhardt were each arrested on multiple felony drug charges and booked into the county jail, where they are both locked up in lieu of $117,000 bond. Reinhardt was sentenced to two years probation in September 2018 in connection with a grand theft conviction for stealing $1,500 from a Kohl’s department store where he worked as an assistant manager.(https://bit.ly/2UnZVtX)

BIG SCREEN-LITTLE SCREEN: Brought to you by ChannelSurferTV.com
Tickets for this past weekend’s XFL game in Washington D.C. were selling online for more money than tickets to the NFL’s Washington team, the Redskins. (https://bit.ly/2H8pXtk)

Michele Williams told US Weekly that the hazing rituals were brutal when she first joined “The View.” (https://pge.sx/37g8J7U)

Ready for this earth-shattering news? Making time for regular trips or vacations with family and friends is linked to higher overall well-being. Yep, taking time away from the daily grind is good for you. In a study, Americans who say they take regular trips have significantly higher well-being than those who say they do not.

Miami has canceled its Chinese New Year Festival over health concerns from the coronavirus.(https://hrld.us/2SaxsX0)

The Mormon Church revealed that it has quietly amassed over $100 billion dollars in funding. (https://on.wsj.com/37bdLTg)

A TSA agent was arrested at Los Angeles International Airport for tricking a female passenger into showing him her breasts twice during a screening. (https://nbcnews.to/2H5vUHt)

At least twenty-four Americans are infected with the Coronavirus onboard a cruise ship that’s quarantined in Japan. (https://bit.ly/2SgvJ2v)

Apple may be forced to delay its cheaper version of the iPhone. (https://bit.ly/2SfXwzW)

SeaWorld trainers will no longer ride dolphins at theme parks after PETA complained the stunt was demeaning and beat up the animal’s souls.(https://bit.ly/31Its2Z)

You have a nail in your body. Or, at least, the components of one. Iron is an important nutrient that the human body needs. It helps your red blood cells carry oxygen, which is necessary for producing energy throughout the body. That's why an iron deficiency can present itself with feelings of exhaustion. Amazingly, a healthy adult has about three grams of iron, enough that, if it were pulled out and melted down, it could form a nail up to three inches long.

An Australian man using a mobile phone while horse-riding has faced court - because he didn't have a hands-free device fitted to the animal. The man was traveling at an estimated speed of 10km/h and holding a mobile phone to his ear when police stopped him. When he later had the matter dealt with in Mudgee Local Court, Magistrate David Day said, “under the road rules a horse is a vehicle ... and he didn't have a hands-free device fitted to the horse.” While the defendant's solicitor submitted that the matter was “trivial,” the 30-year-old man pleaded guilty to using a mobile phone while riding a horse “because he concedes that the horse was in motion.” (https://bit.ly/2uWiFpM)
MOMENT OF DUH: Brought to you by SingleStudentLoan.com
Two cheerleading teams at local high schools in St. Louis have been suspended for the remainder of the school year following a brawl between the squads. The brawl broke out last Saturday between cheerleaders from East Saint Louis and Trinity Catholic high schools. The video has been watched hundreds of thousands of times since it was posted a few days ago. The video shows that, just two minutes into a “battle of the cheerleaders” event, the fight broke out. It continued for a minute, and in the video, viewers can see people trying to break up the brawl. Both East Saint Louis and Trinity Catholic announced an immediate end to the cheerleading season for the year. East Saint Louis released a statement saying, in part, “We will not lower our expectations and will consistently take strong action when safety and sportsmanship is compromised.” (https://bit.ly/38fPRat)

FAKE NEWS.... OR FLORIDA?!
I read a headline and Heidi (and you) need to guess if the story is FAKE NEWS or something that really happened in the state of FLORIDA.
A Sarasota Janitor was fired from a daycare after mixing vodka in the Kool Aid Container ….. FAKE NEWS
GOOD NEWS: Brought to you by BetterCreditCards.com