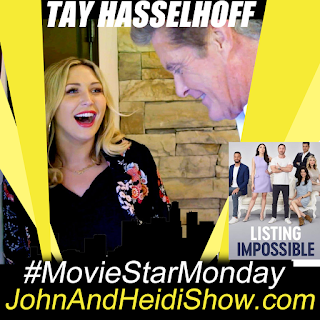 It's another #MovieStarMonday with Tay Hasselhoff. While she appeared in the movie Sharknado 4 and on a season of "Rich Kids of Beverly Hills" and the extremely short lived "The Hasselhoffs," Tay currently works as member of high-profile Los Angeles real estate agent Aaron Kirman's team. The job actually led to her return to reality TV, as CNBC's new series "Listing Impossible" follows the agency as they try to sell multi-million dollar mansions. Full episodes available here: https://www.cnbc.com/listing-impossible/

TODAY IS A SPECIAL DAY! (A special thanks to NationalDayCalendar.com)
February 24
National Tortilla Chip Day

A new study found that 7 in 10 Americans hide unhealthy eating habits from their partners. (https://bit.ly/31P5YcG)

THIS IS YOUR BRAIN ON DRUGS: Brought to you by TimeForRehab.com!
Each day we share stories about people doing dumb things under the influence, but ADDICTION IS NO LAUGHING MATTER! If you or someone you know needs help, we're here! Learn more at TimeForRehab.com.
A Florida man and his furry “accomplice” were taken into custody by authorities who said the man shoplifted from a store. Hillsborough County Sheriff’s Office said Logan Wilson was arrested last Wednesday and charged with petit theft and possession of meth. Wilson admitted to stealing $259 worth of items from Bass Pro Shops. He was arrested during a traffic stop after he was seen leaving the store. Deputies also took Wilson’s four-legged friend into custody. A sheriff’s office Facebook post showing an officer holding a small puppy said deputies took care of the “cutest accomplice” before handing him over to Hillsborough County Animal Services. Animal services will care for the dog until his owner is released from jail. Animal services has listed the puppy as “pre-adopted.” Deputies said that if the owner doesn’t claim the dog, it will go up for adoption. (https://bit.ly/37hHVUN)

Netflix has a new show called “Love Is Blind” in which couples get engaged without ever seeing their partner’s face. The premise of the show has them sitting in office style cubicles and flirting with the person next to them. (https://bit.ly/2UQBDJ6)

Showtime announced that “Ray Donovan” will get a proper ending after the show was unceremoniously canceled last week. (https://pge.sx/37rBRJg)

A Chicago couple who were treated for coronavirus have made a full recovery.
(https://bit.ly/2wtnSpK)

A group of Daredevils in Dubai known as “Jetmen” have unveiled a vertical takeoff jet-pack that allows humans to fly like Iron Man. (https://bit.ly/2V53aGS)

A video of a Michigan woman who flew her mini-service horse first class on a flight to Dallas has gone viral. (https://bit.ly/38QRZ8E)

Taylor Swift’s father fought off an intruder who broke into his Florida Penthouse before police arrived and arrested the man. (https://dailym.ai/2HAAWvN)

A video of a Georgia man who used a shopping cart to take down a shoplifter who was being chased by police out of a Home Depot has gone viral. (https://cnn.it/2SBnHRZ)

Elton John needed to be helped offstage in New Zealand due to pneumonia.
(https://bit.ly/37CLBjY)

FUN FACT FOR YOU:Share this with your friends... they'll think you're really smart!
Dinosaurs lived on every continent. Back in their day, dinosaurs lived on every continent on Earth, including Antarctica. The reason we only find their bones in certain places, though, is that weather and soil conditions in those places were just right for the bones to be fossilized. Scientists also speculate that there may be many smaller-sized dinosaurs that we know nothing about because their bones were too small to fossilize well.

Dateline.... ChinaChinese Officials have destroyed $600 million worth of cash to stop it from spreading the coronavirus. (https://bit.ly/38AC8eq)

A New Jersey woman was arrested Tuesday after police said she stole over half a million dollars form a church to pay for her wedding. According to NBC NBC10 Philadelphia, 43-year-old Taisha D. Smith-DeJoseph was a volunteer at St. Paul's Baptist Church in Florence Township. She oversaw the church's finances. From 2014 through March 2019, Smith-DeJoseph allegedly embezzled over $561,000 from the church, opening electronic bank accounts for the church and using the money. Police said she used the money to pay car loans, rent, credit card expenses, satellite television, cell phone bills and even for her wedding. Officials added that she never filed income tax returns from 2014 to 2018 to hide her crimes. (https://bit.ly/2UR4fSy)
MOMENT OF DUH: Brought to you by SingleStudentLoan.com
A Washington state driver is facing a hefty fine after being caught using a highway carpool lane with a giant stuffed dinosaur as their only passenger. Trooper Rick Johnson of the Washington State Patrol said a driver was pulled over Wednesday for speeding in the high-occupancy vehicle lanes of Interstate 5 northbound. The trooper conducting the traffic stop quickly discovered the driver's only passenger was a big green stuffed dinosaur toy. “Even if you have a favorite stuffed animal it doesn't count as a passenger for the HOV,” Johnson wrote. The driver could be facing a hefty fine thanks to a law that took effect last summer that adds a $200 fine to the $186 base fine for a HOV violation if a driver is caught “using a dummy, doll, or other human facsimile to make it appear that an additional person is in the vehicle.” (https://bit.ly/38sktpo)

FAKE NEWS.... OR FLORIDA?!
I read a headline and Heidi (and you) need to guess if the story is FAKE NEWS or something that really happened in the state of FLORIDA.
An adult actor was arrested for impersonating a police officer after he drove home from the set in a police outfit ….. FAKE NEWS
GOOD NEWS: Brought to you by BetterCreditCards.com