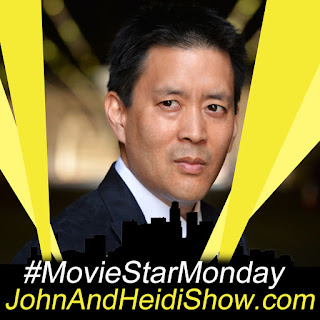 It's another #MovieStarMonday with Scott Takeda got his start in television in 1990 as a TV news reporter in Pocatello, Idaho (KIDK). As his career grew, he then moved on to newsrooms in Ohio (WTOL), Denver (KCNC), and finally Philadelphia (WPHL) where he worked behind the camera as a producer-photojournalist. During his time as a TV journalist, he won two regional Emmy awards and two "Photographer of the Year" titles.

In 1995, he joined the staff of "News-for-Kids" and spent three seasons producing segments for the Emmy-award winning syndicated children's show. During that time, he also formed his own production company, producing the documentary film "The Holocaust: Colorado Remembers." With his company, Scott has won four additional Emmys, more than thirty national Telly Awards and the international Gold WorldMedal from the New York Festivals TV Film Awards. His client list includes Buick GMC, Eli Lilly, Proctor and Gamble, and MSN.

In 2001, he made his national acting debut as Sgt. Tai Lee in the Animal Planet series "Busted."

He now splits his time between LA and Colorado, working on both sides of the camera as an actor-director.

A new survey found that one third of commuters are stressed out before they even get to work. (https://bit.ly/2RUv5WQ)

A Largo woman was arrested Friday for misusing 9-1-1 by calling and texting the number to make non-criminal complaints about her husband. Police said 69-year-old Sylvia Shumaker used 9-1-1 multiple times via text and phone to ask for things like a counselor and how to file for divorce. Police responded to Shumaker’s residence early Friday morning around 1:50 a.m. Shumaker was reportedly “highly intoxicated” when being questioned by police. She was arrested and charged with misuse of the 9-1-1 system. (https://bit.ly/2RUP6N3)

Dog The Bounty Hunter proposed to his girlfriend, Moon Angell, on the latest episode of the Dr. Oz show.(https://pge.sx/37ES2nz)


Shaun Weiss, the child actor who starred in the film “The Mighty Ducks,” was arrested in California after breaking into a home while high on meth. (https://pge.sx/37Jo0iM)

SCOOP OF THE DAY: Brought to you by FunkyMonkeyShirts.com
Apple posted its highest fourth quarter earnings ever thanks to hotter than expected phone and tablet sales. (https://yhoo.it/2S0Sjul)


A New York man was arrested for DUI after driving his SUV up a ski slope. He plead not guilty. (https://dailym.ai/3aVhEyq)


A Tennessee man smoked a joint in court during his drug possession trial and was re-arrested. (https://bit.ly/2O41oBF)


Prince Andrew is denying the FBI’S claim that he’s not cooperating with their probe into Jeffrey Epstein’s Death. (https://bit.ly/2GzauSU)


An Irish Vegetarian Frozen Food Company is selling a MEAT PATCH you wear on your arm that will curb your cravings for food. The patch is supposed to emit the smell of bacon to curb your desire for bacon. (https://bit.ly/38Ql3wU)


A video of a stolen van flipping over as the driver attempted to run from cops has gone viral. The female driver was okay and so was her dog. But Florida police found three stolen drug prescriptions and a package of heroin. (https://fxn.ws/36zWF12)

Showers really do spark creativity. Showers aren't just good for your hygiene—they're good for your creativity, too. For a 2012 study published in the journal Psychological Science, researchers gave volunteers creativity problems to solve followed by a period of rest. During that period, some were assigned demanding tasks, while others did simpler tasks that allowed their minds to wander (just like a shower does). Those doing the simpler tasks during the resting time were more likely to solve the original creativity problems.


NEWS HEADLINES.... FROM SOMEWHERE IN THIS WORLD!
Dateline.... Indonesia
Indonesia has installed its first ever female flogging squad to publicly whip people who violate the country’s morality code. (https://yhoo.it/36yfeTk)

A Florida man dressed in an Easter Bunny costume has been arrested after allegedly fleeing the scene of a hit-and-run motorcycle crash. Florida Highway Patrol said they arrested Antoine Tyrkee McDonald on January 16th, as he was trying to evade authorities in the aftermath of a motorcycle crash in Seminole County. The incident began when McDonald allegedly crashed a motorcycle into a carport, damaging a vehicle underneath before fleeing the scene of the crime. McDonald is believed to have ignored a stop sign before hitting a chain link fence and flipping the motorcycle into the carport. A witness is said to have seen him hobbling away from the accident site. Police investigating the incident traveled to the registered address of the motorcycle owner, where they observed a gray SUV backing out of a driveway. They stopped the vehicle and discovered McDonald laying in the back seat, apparently attempting to avoid suspicion by dressing in the bunny costume. McDonald was injured and required assistance to be taken from the car. The costume was removed, and he was placed under arrest before being taken to a local hospital due to his injuries. He was later taken to Seminole County Jail. (https://bit.ly/38K73or)

A deranged Connecticut man was caught on video this week randomly knocking over cosmetics displays and destroying merchandise at a Bloomingdale’s store in Norwalk. The shocking video shows the man pushing several shelves and a glass table and then throwing cosmetics products on the floor, causing an estimated $100,000 worth of damage. The Norwalk resident, identified by police as 42-year-old Jason Gilbertie, is also accused of punching a security guard during the violent rampage, which took place Monday evening at The SoNo Collection Mall. Another guard also tried pepper spraying the man, but that was not enough to stop him. Police arrived at the mall minutes later and arrested Gilbertie after a brief struggle. He was charged with assault, interfering with an officer, breach of peace and criminal mischief. The suspect was held on $6,500 bond. (https://bit.ly/3aGjfsa)
FAKE NEWS.... OR FLORIDA?!
I read a headline and Heidi (and you) need to guess if the story is FAKE NEWS or something that really happened in the state of FLORIDA.

A Palatka man was arrested after asking deputies to test the quality of the meth he bought off a local drug dealer ….. FLORIDA (https://bit.ly/2DojjOu)