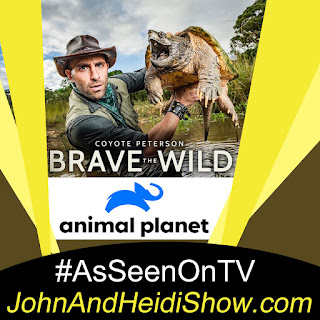 Today we visit with Coyote Peterson about his new show... Coyote Peterson: Brave the Wild” premiered Sunday, Feb. 9th and is on every Sunday, on Animal Planet. https://www.animalplanet.com/tv-shows/coyote-peterson-brave-the-wild/

A survey by the National Sleep Foundation found that 1 in 4 married couples sleep in different beds to feel more energized in the morning.(https://bit.ly/31InWNL)

THIS IS YOUR BRAIN ON DRUGS: Brought to you by TimeForRehab.com!
Each day we share stories about people doing dumb things under the influence, but ADDICTION IS NO LAUGHING MATTER! If you or someone you know needs help, we're here! Learn more at TimeForRehab.com.
Charges have officially been filed against former Arkansas chemistry professors David Bateman and Dr. Bradley Rowland for manufacturing meth, possession, including advanced penalties for manufacturing meth in a Drug Free Zone. According to court documents, in December of 2019, the Clark County Sheriff’s Office received information from HSU’s legal team of the two professors acting in a way “that lead such faculty members to believe that these persons were involved in some type of illegal activity.” Documents also state that the suspects exhibited weight loss and were “extremely guarded” about who was in their laboratories and when. In October, the Reynolds Science Center building on the Arkadelphia campus was evacuated and closed after an “undetermined chemical odor” was reported. Three weeks after the building was closed, Reynolds was reopened after a third-party environmental service company tested the building and indicated that the science center met all EPA recommendations.(https://bit.ly/375MK3r)

Hollywood producer Jon Peters claims his marriage to Pamela Anderson went bust after he paid off all her debts. (https://pge.sx/2vswLPC)

Halfway into February might seem like an odd time to run a list of our most anticipated movies of 2020. But let’s be real: The first few weeks of just about any year tend to be a pretty dire time for moviegoing, give or take the odd unseasonable January triumph or low-profile arthouse gem. Hollywood, as a rule, mainly treats the post-holidays timeframe like a write-off period—a designated wasteland for its least promising projects. And those looking to see something good in theaters will often reach not for brand new movies but the previous year’s award-season contenders they haven’t caught up with yet. As a result, January often feels like an extension of the year it follows, at least cinematically speaking. Maybe we all collectively abide by an unspoken agreement: The year in movies doesn’t really begin until February.


SCOOP OF THE DAY: Brought to you by FunkyMonkeyShirts.com
According to a study, the big three sports that might put a glimmer in a kid’s eye but blow a massive hole in a parent’s bank account are ice hockey, gymnastics, and horseback riding.

In Tennessee, a well-organized burglary suspect was busted when he dropped his notebook at a break-in. His crime journal included other homes he’d broken into, notes from his daughter, and his daughter’s address.

Jeni Boysen got a text from her neighbor this week. “Your kid is naked in your window,” the neighbor said. “I looked up when I got home and there he was.” Boysen’s response? “OMG.” The Facebook post is an internet sensation. It has more than 40,000 shares and about 150,000 likes. https://www.wvlt.tv/content/news/Moms-neighbor-texts-picture-Your-kid-is-naked-in-your-window-567672291.html

A two-year investigation has resulted in federal prosecutors charging four members of the Chinese military for their roles in a major breach of credit-reporting company Equifax in 2017. The data breach was the largest in U.S. history and exposed personal data affecting nearly 150 million people. The four members of Beijing's People's Liberation Army were charged with computer fraud and abuse, economic espionage and wire fraud. Prosecutors say the suspected hackers found a vulnerability in Equifax servers that gave them login credentials and for two months mined data that included credit card numbers, drivers licenses and social security numbers.

Pro baseball once had women players. While there are currently no female players in Major League Baseball, there have been plenty of women in professional men's leagues. The first was Lizzy Arlington, who pitched during the ninth inning for the Reading Coal Heavers in 1898 and won her team the game. A little over 30 years later, an African-American woman, Jackie Mitchell, pitched against the Yankees during an exhibition game, striking out both Babe Ruth and Lou Gehrig. What's more impressive: Mitchell was 17 years old at the time.

Dateline....
British Airways broke the record for the fastest flight from New York to London by hitting top speeds of 825 miles per hour thanks to winds that were blowing at 250 miles per hour. The flight lasted 4 hours and 56 minutes, which is quicker than the previous record of 5 hours and 26 minutes. (https://bit.ly/2w7AKld)
WEIRD NEWS: Brought to you by WeirdGiftOfTheDay.com

One woman is behind bars after Knoxville Police said she's accused of stabbing her boyfriend in the face with scissors. According to court documents, Pamala Holladay, 72, was arrested after police were called to a home on Whittle Springs Road just after 2:30 a.m. January 16. The victim claims Holladay stabbed him in the face with scissors because she was unhappy with their sleeping arrangements. Officers at the scene reported that both individuals were "extremely intoxicated." Holladay was charged with aggravated assault and taken into custody. The victim was treated for his injuries at UT Medical Center.
https://www.wvlt.tv/content/news/Knoxville-woman-accused-of-stabbing-boyfriend-with-scissors-567558891.html

A sheriff's office in Alabama says a man confronted a neighbor for urinating in public and was shot in the face during a gunfight that followed their argument. Mobile County Sheriff’s Capt. Paul Burch told news outlets that it happened near Grand Bay. He said a man was urinating outside early Sunday when a neighbor approached him. Burch said the upset neighbor got a gun from his car and fired the first shots. He says the man who had been peeing then returned fire and struck him in the face. Burch said the injuries were not life-threatening. Neither man was publicly identified.
https://www.wvlt.tv/content/news/Fight-over-public-urination-ends-with-Alabama-man-shot-567553141.html
FAKE NEWS.... OR FLORIDA?!
I read a headline and Heidi (and you) need to guess if the story is FAKE NEWS or something that really happened in the state of FLORIDA.

A man was arrested for driving recklessly on a beach after streaming it on FACEBOOK LIVE ….. FLORIDA (https://bit.ly/2Nd1PrE)
GOOD NEWS: Brought to you by BetterCreditCards.com


Newborn Kittens Dangling From A Coconut Tree Get Rescued
https://www.sunnyskyz.com/good-news/3636/Newborn-Kittens-Dangling-From-A-Coconut-Tree-Get-Rescued