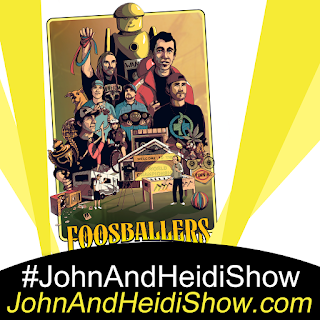 Today we chat with Joe Heslinga, the director, co-writer and co-producer of the documentary film "Foosballers" which was released via iTunes (2/13) has been #1 on the sports movie chart and in the Top 10 for documentaries. You can view the trailer for the film HERE www.foosballersmovie.com

A survey by Riviera Travel found that adults over the age of 55 are happier than millennials. (https://bit.ly/3bMrSBP)

THIS IS YOUR BRAIN ON DRUGS: Brought to you by TimeForRehab.com!
Each day we share stories about people doing dumb things under the influence, but ADDICTION IS NO LAUGHING MATTER! If you or someone you know needs help, we're here! Learn more at TimeForRehab.com.
An alleged drunk driver in Florida initially declined a breathalyzer test, telling a deputy sheriff on Sunday, “You didn’t pull me over, I pulled you over,” a report said. 63-year-old Juan Zamora gave the puzzling response after flashing his headlights at a Marion County Sheriff’s deputy’s squad car in Ocala in order to ask for directions to an auto parts store. The deputy stopped and smelled alcohol coming from Zamora as he asked the question. The driver, who had a 15-year-old passenger, also had bloodshot eyes. Zamora allegedly admitted to downing two shots of bourbon earlier that day. When he finally took the breathalyzer test, he failed, registering above Florida’s 0.8 legal limit. Authorities later found a bottle of whiskey in his car and a white substance, which field-test positive for cocaine, in Zamora’s shirt sleeve. He was charged with DUI and cocaine possession. (https://bit.ly/39ujq8k)

Macaulay Culkin told Esquire that Michael Jackson never did anything to him and that he never saw him do anything to anyone else. (https://bit.ly/31VXbFW)

J.J. Abrams is reportedly in negotiations with Lucasfilm to release a director’s cut of Star Wars: The Rise of Skywalker... Skywalker was released to theaters in mid-December and has grossed just over $1 billion.

An 8-week-old Chihuahua has made an unlikely friend at a Rochester, New York, animal shelter: a pigeon who can’t fly. Herman, who has been living at the shelter for over a year, was likely left flightless due to the West Nile virus or a brain injury, while Lundy arrived six weeks ago unable to use his hind legs. Lundy and Herman snuggle together and have become best friends.

Florida’s Dr. Lucky Meisenheimer is a skin cancer surgeon and the owner of over 10,000 yo-yos. Some of his yo-yos are antiques, including a circa 1790s brass toy from England.

The original King Kong from 1933 is coming back to theaters next month for the first time in nearly 65 years. It will show on over 600 screens on Sunday, March 15.

Researchers say social media makes breaking up harder than ever before since there are digital reminders of your ex.

A Duke University study analyzed data from 22,000 online daters and found that "women put a premium on income and height when deciding which men to contact." For example, the study showed a 5-foot-9-inch man needs to make $30,000 more than a 5-foot-10-inch one to be as successful in the dating pool.

Researchers found that ants are so tidy that they create restroom areas in their nests.

FUN FACT FOR YOU:Share this with your friends... they'll think you're really smart!
Rolls-Royce makes the most expensive car in the world. Currently, the most expensive car in the world is a Rolls-Royce Sweptail that sold for $13 million. However, even if you have that kind of dough lying around, you won't be able to buy it—only one was made, and it was custom-built from the ground up according to the buyer's specifications. But brand-new custom cars have nothing on used classics; the recent sale of a 1963 Ferrari GTO for $70 million is supposedly the highest price ever paid for a car.

Dateline.... EnglandA Whitney Houston hologram is going on tour in England starting this week. Ticket prices are the equivalent of $300 American. (https://bit.ly/2ucQtPg)

A Florida shoplifter trying to get away from a DeLand store stripped naked and steaks tumbled out of his pants. Police found 28-year-old Stefan Short running out of the store in the buff, and when he refused to stop officers shot him with a Taser. Officers were dispatched to the store and told that Short was being pinned to the ground by a manager and a civilian but that he was fighting them. Witnesses reported to police that in an attempt to get away, Short wriggled out of his clothes. Police said Short stole four packs of ribeye steaks valued at $41.24. Short was charged with resisting an officer without violence, resisting a store employee while committing a theft, and first-degree petty theft. He remained held without bail Monday at the Volusia County Branch Jail.
(https://bit.ly/39LDPpK)
MOMENT OF DUH: Brought to you by SingleStudentLoan.com
A triple dog dare gone wrong. It might seem like it came right out of a movie, but it actually did happen in Green Bay on Friday. A student at a local elementary school got his tongue caught on a cold metal pole. “We all grew up as kids and saw ‘The Christmas Story,’” said Police Commander Kevin Warych, referring to the 1983 movie where this exact thing happened. “Curiosity probably got the best of this child who subsequently got [their] tongue stuck to the post.” Paramedics and police responded in the 7 o'clock hour Friday morning. In subzero temperatures, metal can become cold enough to flash freeze the moisture on your tongue, sticking you to its surface and possibly causing injury. Warych says you shouldn't try it at home. (https://bit.ly/2wo1HkP)

FAKE NEWS.... OR FLORIDA?!
I read a headline and Heidi (and you) need to guess if the story is FAKE NEWS or something that really happened in the state of FLORIDA.
A man stripped naked in a shopping mall and made WHOOPING sounds at nearby police... FLORIDA (https://bit.ly/2U9yzok)
GOOD NEWS: Brought to you by BetterCreditCards.com

A woman in Philadelphia has adopted a group of biological siblings in order to keep the kids together.
https://www.sunnyskyz.com/good-news/3669/Woman-Adopts-4-Siblings-To-Keep-Them-Together