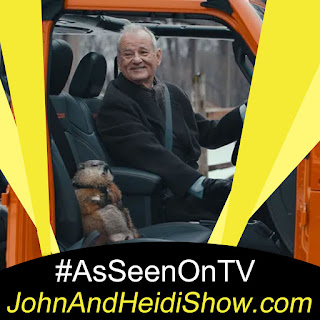 A new study found that college students smoke more marijuana in states where it’s legal and drink less beer in the process. (https://bit.ly/2OczSC0)

59-year-old Frederick P. Brechter was arrested on Friday at around 11:00 p.m. after the man attempted to drive a vehicle up Magic Mountain Ski Area. Troopers from the Vermont State Police and officers from the Winhall Police Department responded to a report that a man was trying to drive a car from the parking lot up the ski slopes. Police met with the driver, identified as Frederick P. Brechter, of Shelter Island, NY. According to the report, Brechter failed standardized field sobriety tests and displayed several indicators of impairment. Brechter already has one DUI on his record. (https://bit.ly/2uDOKlV)


A new Amazon series follows a woman who fell in love with Ted Bundy. (https://bit.ly/2O1PrMD)

SCOOP OF THE DAY: Brought to you by FunkyMonkeyShirts.com
NASA unveiled its first ever, “Space Home,” where Americans will have a massive window to view the earth while they’re in space. (https://bit.ly/37CX1oP)


The makers of Jameson Irish Whiskey are selling a cold brew coffee that is 70 proof. The press release says it’s aimed at people who want a breakfast coffee that packs a punch. (https://bit.ly/36zyhwr)


The University of Missouri has started using an app to track students’ locations and make sure they attend class. (https://bit.ly/310hoK6)


A video of two Long Island girls getting splashed by a massive puddle after getting land sharked on their way out of a store has gone viral. The incident happened at a place called HEMP CLOUDS, which is a CBD dispensary and convenience store. (https://dailym.ai/38OFeLo)


The F.B.I called out Prince Andrew in a press conference, saying he has provided ZERO COOPERATION in the Jeffrey Epstein probe despite promising to help as much as possible. (https://nbcnews.to/2t5cAGN)


GM announced that it’s bringing back the HUMMER, although it will now run on electric instead of gas. (https://fxn.ws/37Ltidq)

Dolphins have been trained to be used in wars. Dolphins are known widely as adorable, intelligent animals. What is not as widely known is that these crafty creatures were used largely by the U.S. and Soviet Union during the Vietnam War and the Cold War. Both countries studied the creatures for their sonar capabilities, but also trained them to detect mines, bring equipment to divers, find lost equipment, and guard submarines among other nifty tricks.


NEWS HEADLINES.... FROM SOMEWHERE IN THIS WORLD!
Dateline.... England

The Queen of England and Prince Charles are holding crisis talks over Prince Andrew’s involvement in the Jeffrey Epstein Scandal. (https://bit.ly/36GotAP)

WEIRD NEWS: Brought to you by WeirdGiftOfTheDay.com
An Avery County, North Carolina man has been arrested and charged after authorities say he struck a high school basketball referee after a game in Mitchell County. 47-year-old Jerry Dale Jones of Newland is charged with assault on a sports official, disorderly conduct, and resisting a public officer. According to arrest warrants, on Tuesday, January 21st after a high school basketball game at the Mitchell High School gymnasium, Jones approached the victim, pointing his finger in the victims face and stating “that’s a bull s!@# f@#$ing call!” Jones then struck the victim in the face. When a sheriff’s deputy attempted to break up the fight, Jones refused to listen to the verbal commands and continued attempting to lunge towards the victim. Officials said cases like these are what's causing a referee shortage in WNC. Jones was arrested and held on a $5,000 bond. He was ordered to have no contact with the victim and is not allowed on the Mitchell High School property. (https://bit.ly/37xQcoD)

A Florida man was arrested Wednesday after shining a laser pointer at multiple pilots making their approaches at Sarasota-Bradenton International Airport. 41-year-old Charlie James Chapman Jr. faces multiple charges after police said he temporarily blinded one of the pilots. Video claims to show him throwing rocks and directing the laser at a Manatee County Sheriff's helicopter attempting to locate him. “Pointing a laser at multiple aircraft didn’t end well for Charlie Chapman Jr.,” the MCSO said on Facebook. “He was arrested after pointing one at planes heading into SRQ Airport last night, and then at our MCSO Aviation Unit helicopter. He even tried throwing rocks at the helicopter!” The MSCO Aviation unit helicopter eventually located the suspect on a forklift near the airport where they directed deputies on the ground to surround him. Chapman allegedly grabbed a hammer and made a striking motion towards the deputies who deployed a Taser and subdued the suspect. (https://fxn.ws/36sZG2T)
FAKE NEWS.... OR FLORIDA?!
I read a headline and Heidi (and you) need to guess if the story is FAKE NEWS or something that really happened in the state of FLORIDA.

Doctors have warned that a troop of herpes-ridden monkeys are roaming a neighborhood in Northeast Florida. FLORIDA (https://dailym.ai/2GPvsNq)