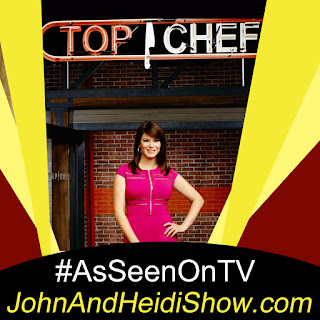 Fifteen chefs from seasons past return (as much as they thought they never would, as seen in the premiere), congregating in Los Angeles, to compete for the show's biggest prize ever: $250,000. The season, which kicks off with an elimination challenge on the beach where a seafood meal must be cooked using only fire, will feature some famous guest judges, including Jon Favreau, Randall Park, Ali Wong, and Kelly Clarkson.

Gail Simmons is a trained culinary expert, food writer, and dynamic television personality. Since the show’s inception in 2006, she has lent her extensive expertise as permanent judge on Bravo’s Emmy-winning series Top Chef, currently in its 16th season. She was head critic on Top Chef Masters, host of Top Chef Just Desserts, Bravo’s pastry-focused spinoff of the Top Chef franchise, and was a judge on Universal Kids’ Top Chef Jr. She also hosts Iron Chef Canada and was the co-host of The Feed.

Her first cookbook, Bringing It Home: Favorite Recipes from a Life of Adventurous Eating, was released by Grand Central Publishing in October 2017. Nominated for an IACP award for Best General Cookbook, it features recipes inspired by Gail’s world travels—all made with accessible ingredients and with smart, simple techniques for successful family meals and easy entertaining. Gail’s first book, a memoir titled Talking With My Mouth Full, was published by Hyperion in February 2012.

A new study found that the average women gets “mansplained” to six times per week at work. (https://bit.ly/2U1VV1B)

THIS IS YOUR BRAIN ON DRUGS: Brought to you by TimeForRehab.com!
Each day we share stories about people doing dumb things under the influence, but ADDICTION IS NO LAUGHING MATTER! If you or someone you know needs help, we're here! Learn more at TimeForRehab.com.
A Louisiana woman was arrested on drug charges after police determined the $5,000 cash she used to post an inmate's bail had a “strong odor of marijuana.” Authorities began investigating 33-year-old Stormy Lynn Parfait on Friday, shortly after she showed up at the jail to pay the bond fee for an inmate being held there on drug charges. After catching a whiff of the cash, a detective searched her car while she was still at the jail and found nearly $40,000 more inside, along with about 100 Klonopin pills and a food stamp card that wasn't registered to Parfait. Investigators found hundreds of additional pills and cash as well as marijuana, cocaine, and paraphernalia during a search of Parfait's home later. Four unattended children there were turned over to a relative. Parfait was charged with multiple counts of possession with intent to distribute drugs and four counts of illegal use of a controlled drug in the presence of persons under 17. (https://bit.ly/2vXBj1g)

Savannah Guthrie is anchoring “The Today Show” from home amidst the Coronavirus Quarantine. (https://pge.sx/3b8hNxQ)

The LAPD arrested a woman who walked into Jennifer Lawrence’s home on Sunday Night. The woman is facing $2,000 bail. (https://bit.ly/2xN9rNP)

A Business Insider Study found that men make up the majority of Coronavirus cases so far. (https://bit.ly/399J5To)

A survey by the International Research Institute found that sales of potato chips and Oreos have soared during the Coronavirus lockdown while sales of kale and quinoa have plummeted. (https://yhoo.it/2WCjwr9)

A Surgeon at Columbia University predicts that Coronavirus cases will peak in thirty-two days, but could stretch to the fall if things are mismanaged.
(https://yhoo.it/33BJ0GV)

Dallas residents on lockdown have taken a page out of Italy’s notebook and began singing from their balconies. (https://n.pr/3bg0J9k)

FUN FACT FOR YOU:Share this with your friends... they'll think you're really smart!
It is illegal to sell a "bounceless" pickle to somebody in Connecticut. This law put Connecticut Librarians in quite the pickle. The law actually arose as a legend and the people demanded the truth. For hours, librarians in the state scanned past archives of laws within the state until one librarian eventually found the truth in the Hartford Courant. The law was in fact an ordinance that was created in 1945 to thwart pickle packers Moses Dexler and Sidney Sparer. These two men were selling inedible pickles, so laboratories conducted experiments and found that if it doesn't bounce, don't eat an ounce!

Dateline.... NORTH KOREAKim Jong-un has ordered a new hospital to be built as North Korea continues to claim that it has zero cases of Coronavirus. (https://bit.ly/3a4UVz7)

A toilet paper heist was thwarted yesterday by an alert hotel security guard, according to Florida cops who arrested the alleged TP thief on a felony charge. According to investigators, a guard at a Marriott hotel in Orlando was patrolling around 1:30 a.m. Thursday when he spotted a man “pushing a trash can toward his Honda van.” When the suspect reached the vehicle, he removed a bag from the can and placed it inside his car. Finding the man’s actions suspicious, the guard peaked through the van’s window and “noticed the bag was full of unused toilet paper rolls that belonged to the hotel.” When the man--later identified as 31-year-old Angel Hernandezcinto--returned to the van, the guard confronted him and “Angel admitted to taking the toilet paper.” Hernandezcinto, who works for a company that provides cleaning services to the Marriott, confessed and “apologized for his actions.” Hernandezcinto, who initially provided cops with a fake name, was arrested for theft from a public lodging establishment, a felony.
(https://bit.ly/3a6L0cx)

“I have to hunt the Pokémon,” apparently wasn't enough to convince Italian police that a 31-year-old man should be allowed to stay out on Italy's streets during a country-wide coronavirus lockdown. According to a report in the Italian newspaper Leggo, the man was with his daughter in San Fermo, a small town in northern Italy, when he encountered the Italian Carabinieri (Italy's main police force). When asked why he was flouting the country's current lockdown rules, he told the Carabinieri, “I have to hunt the Pokémon.” That was apparently not enough to excuse his actions, and he was charged. Italy has been on strict lockdown since March 10th, when Prime Minister Giuseppe Conte issued a nationwide order. Outside of Asia, Italy has seen the most severe impacts of the coronavirus. (https://bit.ly/2WE20Tx)

A Florida man was arrested for stealing his grandmother's toilet paper. He visited her with friends and distracted her as they tossed the tp out the window. FAKE NEWS
GOOD NEWS: Brought to you by BetterCreditCards.com