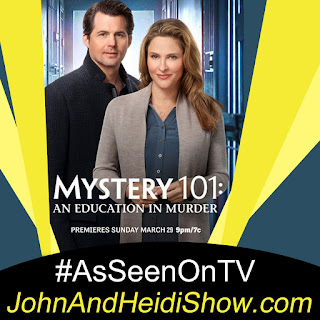 Jill Suzanne Wagner is a film and television actress, model, and game show personality. She was a co-host for the ABC comic competition show Wipeout from 2008 to 2014. Jill first made her mark in Hollywood when she was cast as the first female regular sketch performer on MTV's hit television series Punk'd (2003), opposite Ashton Kutcher. Her new movie of “Mystery 101: An Education in Murder” which premieres on Saturday, March 29 on Hallmark Movies & Mysteries.
https://www.hallmarkmoviesandmysteries.com/mystery-101-an-education-in-murder

THIS IS YOUR BRAIN ON DRUGS: Brought to you by TimeForRehab.com!
Each day we share stories about people doing dumb things under the influence, but ADDICTION IS NO LAUGHING MATTER! If you or someone you know needs help, we're here! Learn more at TimeForRehab.com.
A Michigan man was attacked by his samurai sword-wielding partner last month after he allegedly didn't buy marijuana for the suspect. 28-year-old Neil Patrick Wasinski was hit with various assault charges on January 18th, two days after allegedly punching the victim's ribcage and stabbing him with the 21-inch sword inside the suspect's apartment. Still armed with the bloody sword, Wasinski chased the 23-year-old victim into the parking lot before they both took refuge in their separate apartments, the victim said. Police were called to the scene around noon on January 16th, when they found the victim smoking a cigarette while holding a bloody towel to his side. The victim said he was Wasinski's boyfriend of one-and-a-half-years and claimed his partner decided to attack him after he failed to buy him marijuana. Wasinski was charged with assault with intent to murder, assault with a dangerous weapon and assaulting or resisting police. (https://fxn.ws/2TFkIID)

The Kardashians are looking to kill a new book based on Kim’s sex tape.
(https://pge.sx/33DKLTI)
To help ease your cabin fever, Hallmark Channel is bringing back its marathon of Christmas movies this weekend the network will air 27 of its Countdown to Christmas films.

The coronavirus continues to spread throughout the world, forcing events to cancel left and right — including movie releases. The latest to join the list is Wonder Woman 1984. Warner Bros. announced the delay Tuesday, holding back the film for a few more months until this all blows over.

Warner Brothers has postponed the release of the “Wonder Woman” sequel because of Coronavirus concerns. (https://bit.ly/2UittZv)

Italians are being hit hard by Coronavirus because of their custom of kissing on both cheeks. (https://yhoo.it/33Jw8hR)

Prince William called the Coronavirus a, QUOTE, “Dreaded crisis that he wished would never come.” (https://pge.sx/3deOVWC)

More people stuck at home has led to a higher demand for cannabis. A Bank of America analyst said, “Our checks across North America were consistent: regardless of region, cannabis purchases have accelerated.”

When your mind draws a blank it probably means you’re under stress, according to a study of why we forget. Seems that stress plays an important role in how well our powers of observation and recall interact. Stressful situations like exams, courtroom testimony and job interviews can all affect our memory.

Studies show that women need at least one hour of exercise a day in order to keep excess weight off.

A Northern California city is asking residents not to use T-shirts as toilet paper as panicked customers exhaust toilet paper aisles nationwide. The City of Reddng California tweeted: “Remember, if you use anything other than toilet paper, Bag it. Don’t flush it.”

While most of Florida’s elected officials urge the public to refer to the health information from the Centers for Disease Control, the Florida Department of Health, or their own doctor, one commissioner uses his public commission meetings to share his own ideas about COVID-19. At the March 20 meeting of the Okeechobee County Commissioners, Commissioner Bryant Culpepper referenced a program he said he saw on One American News Network about the coronavirus. Culpepper shared the hoax that viruses like COVID-19 hang out in your nasal passages until they become healthy enough to head into your lungs. And they way to kill them is to hold a blow dryer up to your face and inhale. According to the World Health Organization website, hair dryers are not effective in killing the COVID-19 virus.

A New Jersey man was busted on Tuesday after coughing on a Wegmans employee and telling her he had the coronavirus. The staffer at the Manalapan grocery store worried that George Falcone was standing too close to her and an open display of food Sunday at around 6:30 p.m. — and asked him to take a step back. Instead, the 50-year-old creep allegedly came closer and “purposely” sprayed her with his germs. “He allegedly laughed and said he was infected with the coronavirus.” He then told two other employees that they were lucky to have jobs.” Summonses were issued Tuesday charging Falcone with making terroristic threats, obstruction of law and harassment and will require him to appear in court at a later date. Attorney General Gurbir S. Grewal warned that anyone who tries to pull a similar stunt will also be charged. (https://bit.ly/2WGj5My)

FAKE NEWS.... OR FLORIDA?!
I read a headline and Heidi (and you) need to guess if the story is FAKE NEWS or something that really happened in the state of FLORIDA.
A North Miami man was arrested for breaking into a woman’s home and slow dancing with her cat ….. FAKE NEWS
GOOD NEWS: Brought to you by BetterCreditCards.com