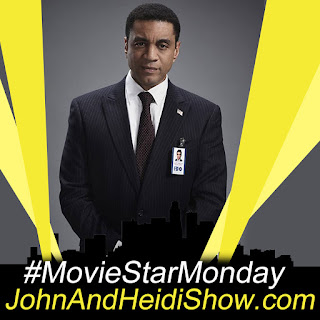 It's another #MovieStarMonday... this time with Harry Lennix, he stars as Harold Cooper in the NBC series "The Blacklist." The show was recently renewed for an 8th season and just shot its 150th episode. https://www.nbc.com/the-blacklist


Lennix is a distinguished film, television stage actor and producer. Moviegoers know Lennix as General Swanwick from "Man of Steel" and "Batman vs Superman: Dawn of Justice," Commander Lock in "The Matrix" and "The Matrix Reloaded" and the Oscar-winning "Ray." He made his screen debut as Dresser in the classic "The Five Heartbeats."

TODAY IS A SPECIAL DAY! (A special thanks to NationalDayCalendar.com)
March 16
National Artichoke Hearts Day
Everything You Do Is Right Day
National Freedom of Information Day
National Panda Day

SURVEYS, STUDIES & SUCH: Brought to you by BetterCreditCards.com
A survey by AAA found that only one in ten drivers trust self-driving cars. 72% said they would be more likely to ride in a self-driving car if they had the ability to take control. (https://bit.ly/38B8qoR)

THIS IS YOUR BRAIN ON DRUGS: Brought to you by TimeForRehab.com!
Each day we share stories about people doing dumb things under the influence, but ADDICTION IS NO LAUGHING MATTER! If you or someone you know needs help, we're here! Learn more at TimeForRehab.com.
A burglary suspect tried to go underground in his attempt to run from the law in northeast Florida. The Putnam County Sheriff's Office arrested 36-year-old Justin Buchler and another man during a burglary investigation in Melrose. A deputy and his K9 partner, while searching the property, found Buchler throwing dirt on himself, in an effort to hide by burying himself in a nest for a gopher tortoise. It's against the law in Florida to mess with the nest of a gopher tortoise, as they are a threatened species. Buchler, of Keystone Heights, faces two counts of larceny, two counts of drug possession, two counts of endangering a threatened species, possession of methamphetamine, and possession of a weapon by a convicted felon. Deputies also arrested 28-year-old Justin Harris of Melrose. He's charged with two counts of burglary, two counts of burglary with property damage, and possession of a weapon by a convicted felon. (https://bit.ly/3aap9AC)

BIG SCREEN-LITTLE SCREEN: Brought to you by ChannelSurferTV.com
Ben Affleck was spotted in Cuba with his co-star Ana de Armas and the two are said to be dating. (https://pge.sx/39IMN7C)
Stephen Spielberg’s adult film actress daughter, Mikaela, says she’s a week sober. (https://fxn.ws/331R4jS)

Corey Feldman told Wendy Williams that his life is in danger over his new documentary exposing Hollywood abusers. (https://pge.sx/2IiuVEa)

An Iranian woman requested a divorce from her husband on the grounds that he had not washed for more than a year. Interestingly, when the couple first married almost a decade earlier the husband was obsessively clean, taking showers three times a day and washing his hand every few minutes.

Amidst coronavirus fears, a video has gone viral of the “Wuhan shake” — a foot-to-foot greeting people in China are using instead of a handshake. In a clip on Twitter, a group of men wearing face masks can be seen saying hello to each other by quickly tapping their feet together.

Peeps -- known for its yellow and pink marshmallow Easter-time treats -- is offering up something completely different this year: sour watermelon flavor.
https://amzn.to/2vPbmB3

It's been ONE WEEK.... Are you still feeling groggy after the Daylight Saving Time switch? Scientists say you better watch out for “microsleeps,” tiny lapses in attention that can create problems at work and accidents on the road. The microsleeps apparently account for extra car crashes and workplace injuries that follow our lost hour each March.

Have you adjusted to Daylight Saving Time? Probably not, as scientists say it could take some of us up to two weeks to recover from the effects of our shifted clocks.

Tornadoes can cause "fish rain." Tornadoes can develop over water just as well as they can over land. When they do, they're called "waterspouts," and they suck up large amounts of lake or sea water—as well as whatever's swimming in that water. If the waterspout travels on to the land and the winds decrease, there's nowhere for those fish to go but down. As far as we know, there's no tornado powerful enough to pick up sharks, but a fish-nado is entirely possible.

Dateline.... CHINAIn China a stray dog was kicked by a guy because the dog was lying in his parking lot. After the guy parked his car, the dog vanished but came back later with a few of his pack and damaged the car by biting it. The dogs bit the wheels and windshield wipers.

A Florida man prosecutors’ say was involved in a scheme to attach “skimming” devices to pumps at gas stations across New England to steal the debit and credit account numbers from thousands of unsuspecting drivers has been arrested. 29-year-old Luis Angel Naranjo Rodriguez of Hialeah, Florida was charged Monday with possessing fifteen or more counterfeit access devices, and possession of device-making equipment, the U.S. attorney’s office in Boston said in a statement. Naranjo Rodriguez was arrested in Concord, Massachusetts last November after police spotted him at a closed gas station next to an unlocked gas pump with keys in the lock. Officers searched Naranjo Rodriguez, a nearby vehicle, and his hotel room and found multiple skimming devices and additional pump keys. He faces up to twenty-five years in prison if convicted. (https://bit.ly/2Q6XE3r)

Angered that another man referred to him as “Drew Carey,” 34-year-old North Carolinan Brian Baer allegedly punched the victim in the face, triggering his arrest for battery during the early morning of March 8th. Police say Baer walloped Casey Simons after leaving a bar in St. Pete Beach, Florida. Baer told cops that “the victim called him Drew Carey which made him mad and he struck the victim once in the face.” The confrontation left Simons with a cut lip. Simons also suffered “scratches on his right knee from being tackled onto the ground” outside Jimmy B’s Beach Bar at The Beachcomber resort. Baer was charged with battery, a misdemeanor, and booked into the county jail. (https://bit.ly/2VY1W0H)

FAKE NEWS.... OR FLORIDA?!
I read a headline and Heidi (and you) need to guess if the story is FAKE NEWS or something that really happened in the state of FLORIDA.
A Spider Monkey attacked a Home Depot Employee after escaping from its owner ….. FLORIDA (https://bit.ly/2vUs6GO)
GOOD NEWS: Brought to you by BetterCreditCards.com

Kids4Community is a 501c3 founded by 15 year old track champ Kenan Pala. The mission of the organization is to help kids help the community by actively engaging them in volunteer work. Just last year alone, the nonprofit provided school supplies for low income and homeless San Diego students. The group also assembled over 5000 hygiene kits for the homeless. They made 2500 care packages for hurricane victims. Assembled over 3000 brown bag lunches to be distributed to homeless shelters, and generously served food for over 600 homeless people. On March 29 they host their 2nd Annual Volunteer Day. Offering a variety of stations including packing hygiene kits, and creating Eastern Gift Boxes and making “Spring cleaning bags” for low-income and homeless individuals in San Diego. https://kids4.org/
The Palas also have a 10 year old book writer in the family. All proceeds from the sale of this book benefit helping homeless families. https://amzn.to/2TXqjsE