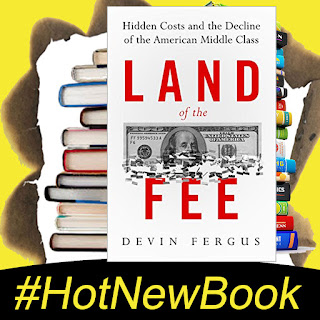 Today we talk with Historian & public policy expert Devin Fergus, Ph.D. Author of LAND OF THE FEE: Hidden Costs and The Decline of The American Middle Class. https://amzn.to/3aMTgOP

LAND OF THE FEE: Hidden Costs and The Decline of The American Middle Class, by historian and public policy expert Devin Fergus, Ph.D. (Oxford University Press, Paperback; December 2019) traces the system of fees in American consumer financial institutions from their origins in the late 1970s to present day. Through extensive research and conversations with financial regulators over the last 15 years, Fergus identifies mismanagement by many consumer financial institutions and a lack of regulatory leadership to curb predation which has resulted in financial fees seriously impacting equality in America.

Scientists have discovered bacteria related to Chlamydia below the Arctic Sea. (https://bit.ly/3cIZdy7)

THIS IS YOUR BRAIN ON DRUGS: Brought to you by TimeForRehab.com!
Each day we share stories about people doing dumb things under the influence, but ADDICTION IS NO LAUGHING MATTER! If you or someone you know needs help, we're here! Learn more at TimeForRehab.com.
The smell of marijuana emanating from a Grand Ridge woman’s bra led Jackson County deputies to a honeypot of drugs, paraphernalia, and cash. The incident began on Friday when a deputy assisted a motorist who had broken down at the intersection of Highway 71 and Blue Springs Road. After helping the driver, Chasity Daniels, move the vehicle the deputy noticed the strong odor of marijuana coming from the vehicle. Daniels said it was from the remnants of a marijuana cigarette in her bra. After the deputy determined Daniels did not have a prescription for medical marijuana the deputy brought in a female deputy who searched Daniels and found, “larger portion of Marijuana than Daniels advised having.” The deputies then searched Daniels car and found half a pound of crystal methamphetamine, additional quantities of marijuana packaged for sale, scales, and U.S. currency. Daniels was arrested and charged with trafficking in a controlled substance and possession of marijuana with intent to distribute. (https://bit.ly/2uIwfgx)

Some big releases at the box office this weekend. KJ Alpa stars in: “I Still Believe.” It’s the true story of Christian music star Jeremy Camp and his journey of love and loss. (https://imdb.to/3aNN9JY)

Also hitting theaters is the new Hillary Swank-Justin Hartley thriller: “The Hunt.” The film is actually about twelve Trump supporters who are being hunted for sport. This is pretty violent. (https://bit.ly/2Q8NAGX)

Vin Diesel and Guy Pierce star in the new Action/Fantasy: “Bloodshot” that comes out this weekend. Vin plays Ray Garrison, a slain soldier, who is re-animated with superpowers. (https://bit.ly/38HQVmT)

An Iowa girl has miraculously regained her vision after being blinded by the flu.
(https://bit.ly/39GumQQ)

Royal Watchers are accusing Prince William and Kate Middleton of ignoring Harry and Meghan at an event with Queen Elizabeth. (http://dailym.ai/39BaEpz)

A study by the University of St. Andrews found that eating vegetables will give your skin a healthy glow. (https://bit.ly/2Q6NYFY)
Katy Perry announced on Instagram Live that she’s expecting her first child with Orlando Bloom. (https://pge.sx/2TKv8Fy)

Genesis has announced a “Last Domino” tour of the UK featuring Phil Collins’ son, Nic, on the drums. (https://bit.ly/2wppIYF)

Ronan Farrow blasted his own book publisher for picking up a book about Woody Allen. (https://nyti.ms/330RMxX)

FUN FACT FOR YOU:Share this with your friends... they'll think you're really smart!
Harriet Tubman was even more heroic than you thought. You probably know that Harriet Tubman was a former slave who became a political activist for the abolition movement. But in addition to smuggling escaped slaves through the Underground Railroad, during the Civil War she was the first woman to lead an armed assault. She planned and executed a number of raids and was known to carry a revolver for personal protection.

Dateline.... RUSSIA
The Kremlin passed a bill that will allow Vladimir Putin to stay in power beyond 2024. (https://bit.ly/2W5cIC8)

Rizwan Fadnis and Rajesh Surve, both 33-years-old, were arrested outside a bus depot in Mumbai for being in possession of 7 kg of whale vomit valued at over $275,000. The substance, also known as ambergris, is unlawful to possess without a license. From the article: “The accused tried to sell the whale vomit by claiming that its consumption helps increase the libido. Ambergris is mainly used in perfumes and cosmetics and fetches a handsome price based on its age. It has an unpleasant smell soon after it is secreted, and as it ages, starts producing a sweet smell,” an officer said. (https://bit.ly/3amYMrh)

MOMENT OF DUH: Brought to you by SingleStudentLoan.com
A Florida man was arrested and charged with practicing dentistry from inside his own home without a license, and he’s been convicted of similar charges in the past. 56-year-old Jose Santos Vicenty was charged with practicing dentistry without a license last Wednesday. Investigators were seen removing dozens of boxes from Vicenty’s home Wednesday morning. It’s not the first time Vicenty has faced charges of practicing dentistry without a license. In 2009, he was found guilty by a judge for the same crime and served two years in prison. In Vicenty’s 2009 arrest report, he claimed to clients that he got his license at the University of Puerto Rico. He also said he performs all procedures, besides root canals. State Department of Health records don’t appear to show that Vicenty was ever a licensed dentist. (https://bit.ly/3cRzLq4)

FAKE NEWS.... OR FLORIDA?!
I read a headline and Heidi (and you) need to guess if the story is FAKE NEWS or something that really happened in the state of FLORIDA.
A Titusville Grandmother popped out her teeth to scare off a nude burglar on her porch ….. FLORIDA (https://bit.ly/2TAhINr)
GOOD NEWS: Brought to you by BetterCreditCards.com

Students' Act Of Kindness For Their Math Teacher Gets The Yankees' Attention
https://www.sunnyskyz.com/good-news/3684/Students-039-Act-Of-Kindness-For-Their-Math-Teacher-Gets-The-Yankees-039-Attention